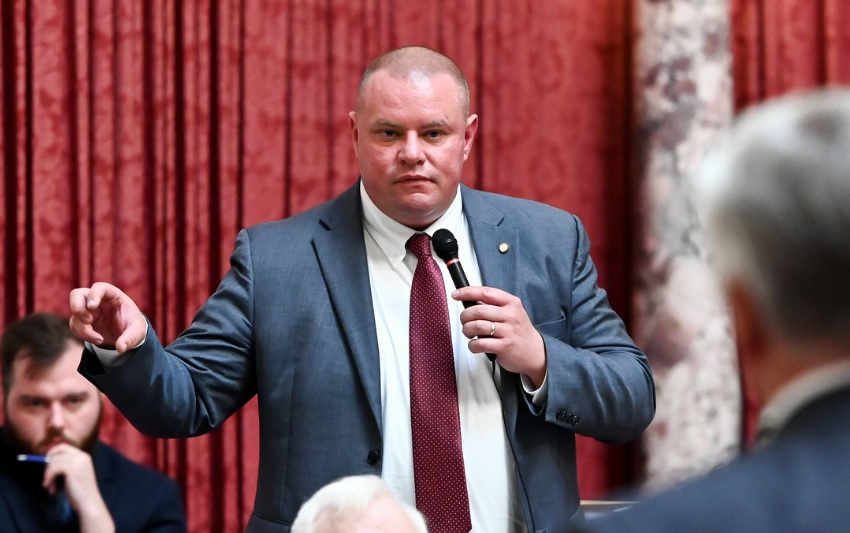 Steele, an attorney from Beckley who was first elected in 2018, said his candidacy is about getting more advancement of the Republican agenda.

“I believe our progress is stalled under the current leadership and a new direction and a new focus is necessary,” Steele said during an appearance Monday on WJLS Radio’s “Radio Roundtable.”

Steele said he’s making the move against incumbent Speaker Roger Hanshaw, R-Clay, for the same reasons he first ran for the House four years ago.

“There’s certain things that we’ve got to achieve in this state and the time is now,” Steele said. “There’s no waiting two or four years–we’ve got to get it done now.”

Hanshaw, who has been speaker since 2018, had no comment Monday on Steele’s announcement.

Steele said he contacted Hanshaw late last week about his announcement. He currently serves as the chairman of the House Committee on Government Organization.

“It’s a new super majority and there’s going to be pressure on leadership and frustration from a super majority that has so many people in it,” Thomas told MetroNews Monday.

That frustration appeared evident during the special session two weeks ago when the House passed a income tax reduction bill and an abortion bill but there was no final agreement with the Senate on either bill. Some Republicans in the House didn’t think the abortion bill went far enough.

The special session seemed to add fuel to the frustration, Thomas said.

“The growing pains you saw in the last couple of (regular) sessions was compounded by a special session called by the governor with no consensus heading into it. So you had real-time policy debate with everybody watching,” Thomas said.

Steele said Monday that the special session was frustrating.

“I’d like to stress that I’m not making this decision because of this special session but I think the outcome of this most recent special session of achieving nothing is a symptom of a larger problem that we have at least in the House of Delegates right now,” Steele said.

He said his candidacy is based upon the “inability of our leadership to accomplish the policy objectives that our constituents elected us to achieve.”

Steele said he’s already reaching out to put together a leadership team who will come up with policies that the people of West Virginia want.

“I’m very and honored and humbled to see the support I have for that and the folks and the faith they have that we’ll be able to accomplish what we need to accomplish,” Steele said.

All 100 seats in the House are up for election November and the for the first time in state history all are single-member district races.

Steele is unopposed in the election.

Hanshaw is opposed in the 62nd District by Laura McGinnis of the ACT Party.

Winners in the November vote will come to Charleston in December to caucus and choose their leaders for the next two years.