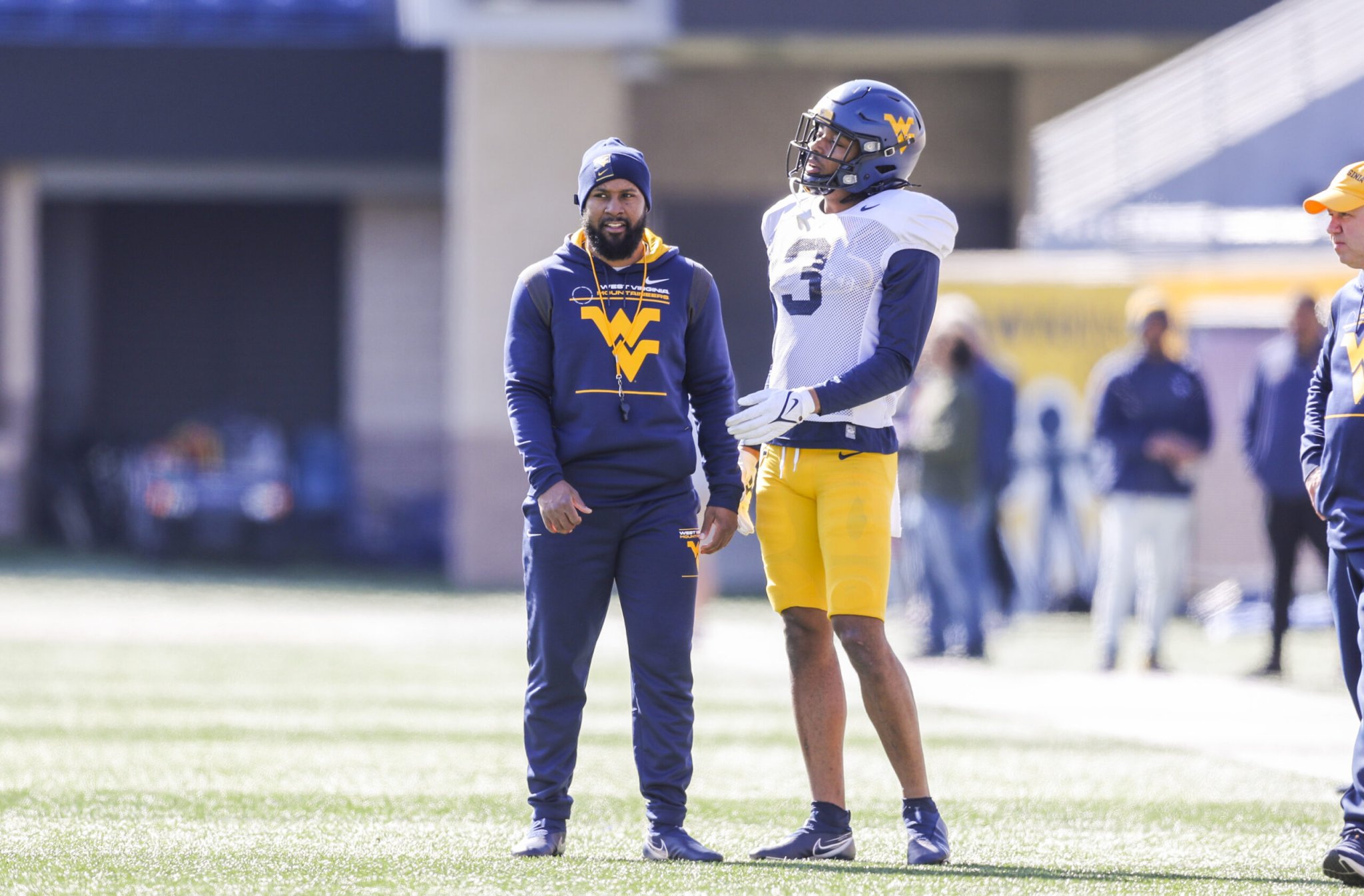 MORGANTOWN, W.Va. — From a production standpoint, three of West Virginia’s top five wide receivers and four of its six leading pass catchers from last season are no longer around.

Fortunately for first-year WVU wideouts coach Tony Washington, redshirt juniors Bryce Ford-Wheaton and Sam James are back, giving the Mountaineers a pair of proven players who provide steady veteran influence at that position.

Still, Washington knows his group needs to be able to count on far more than just Ford-Wheaton and James as West Virginia breaks in a new system under offensive coordinator Graham Harrell.

At the forefront of the list of wideouts WVU is hoping to see take a big step forward is sophomore Kaden Prather.

“Kaden Prather has a lot of peak performances and now the big thing for him is to stack them on top of each other,” Washington said. “When he’s confident, he’s as good as anybody we have in that room.”

One of the more decorated members of the Mountaineers’ 2021 recruiting class, Prather enrolled early and went on to contribute sparingly as a true freshman, catching 12 passes for 175 yards. All but three receptions and 46 yards came over West Virginia’s last three regular season games, with Prather assuming an expanded role toward the latter part of his first college season.

Washington was still with Coastal Carolina then, where he held the same title he does in Morgantown. Since his hiring at WVU in February, Washington has taken notice to Prather’s advanced skill set. At times, the receivers coach believes it almost works against the 6-foot-4, 211-pound native of Montgomery Village, Md., who Washington wants to see simplify things.

“He’s so talented and things come easy to him sometimes,” Washington said. “He makes the game harder than it needs to be. For him, it’s really understanding I have all this ability and talent, but I can’t use everything I know on every single route. Sometimes it takes this or that.”

Since participating in his second spring at West Virginia, Prather has displayed the maturation that Mountaineer coaches hope to see more of moving forward, according to Washington.

“He’s starting to understand I can do this here or do that there. I’m seeing the wheels turn and he’s asking questions that he wouldn’t necessarily have asked in the spring,” Washington said. “He’s playing faster. He’s catching the ball well, especially the past couple days. If he keeps stacking up the way he’s doing, he’s going to be phenomenal.”

With his stature, Prather is likely to join Ford-Wheaton (6-3, 224) as the Mountaineers’ primary targets at outside receiver.

Yet with Winston Wright Jr. — who led WVU in catches, receiving yards and receiving touchdowns a year ago — having transferred to Florida State, and fellow former wideouts Sean Ryan and Isaiah Esdale transferring to Rutgers and Rice, respectively, there’s a need for more than Prather to increase production.

Both Ford-Wheaton and James, who each caught 42 passes for better than 500 yards last season, will be looked at to provide more to a passing game that will feature a new starting quarterback.

“They’ve gotten a lot better with details and understanding the playbook now that it’s being installed for the second or third time,” Washington said. “Really starting to understand the ins and outs, getting better at their technique and building upon what we built in the spring. Of course there’s always that period where you’re trying to get to know each other, trying to get to know what works for them, what I like and what they like and find the best working relationship. Now we’ve grown a bond where those guys trust me and believe in what I’m coaching.”

WVU has added a pair of junior college players to its receiving room in Jeremiah Aaron and Cortez Braham. While unproven at this level, Washington believes both have a chance to become factors as they transition to Division I.

“At the JUCO level, Cortez and Jeremiah were probably the two best athletes on their team, and here, they’re not necessarily going to be the best athletes every time they line up,” Washington said. “So it’s having that technique and doing the little things right every single time. They get extra work, go to extra meetings and they really want to learn. They ask questions. It’s been really good to see.”

Reese Smith, a sophomore with 23 receptions for 252 yards over his first two seasons at WVU, is also back. He and Preston Fox, who impressed in the spring to the point of earning a scholarship, add much-needed depth to a position group seeking to make more big plays in both Harrell and Washington’s first year with the Mountaineers.

“You have to be a magician and make everything look the same,” Washington said. “Be an illusionist to get that [defensive back] to play even. When he’s playing even, now he’s starting to guess and he may sit on something. That’s when you get the big plays. If you’re fast, you’re fast, but when you’re not fast, it’s going to be technique that gets you the separation you need.”