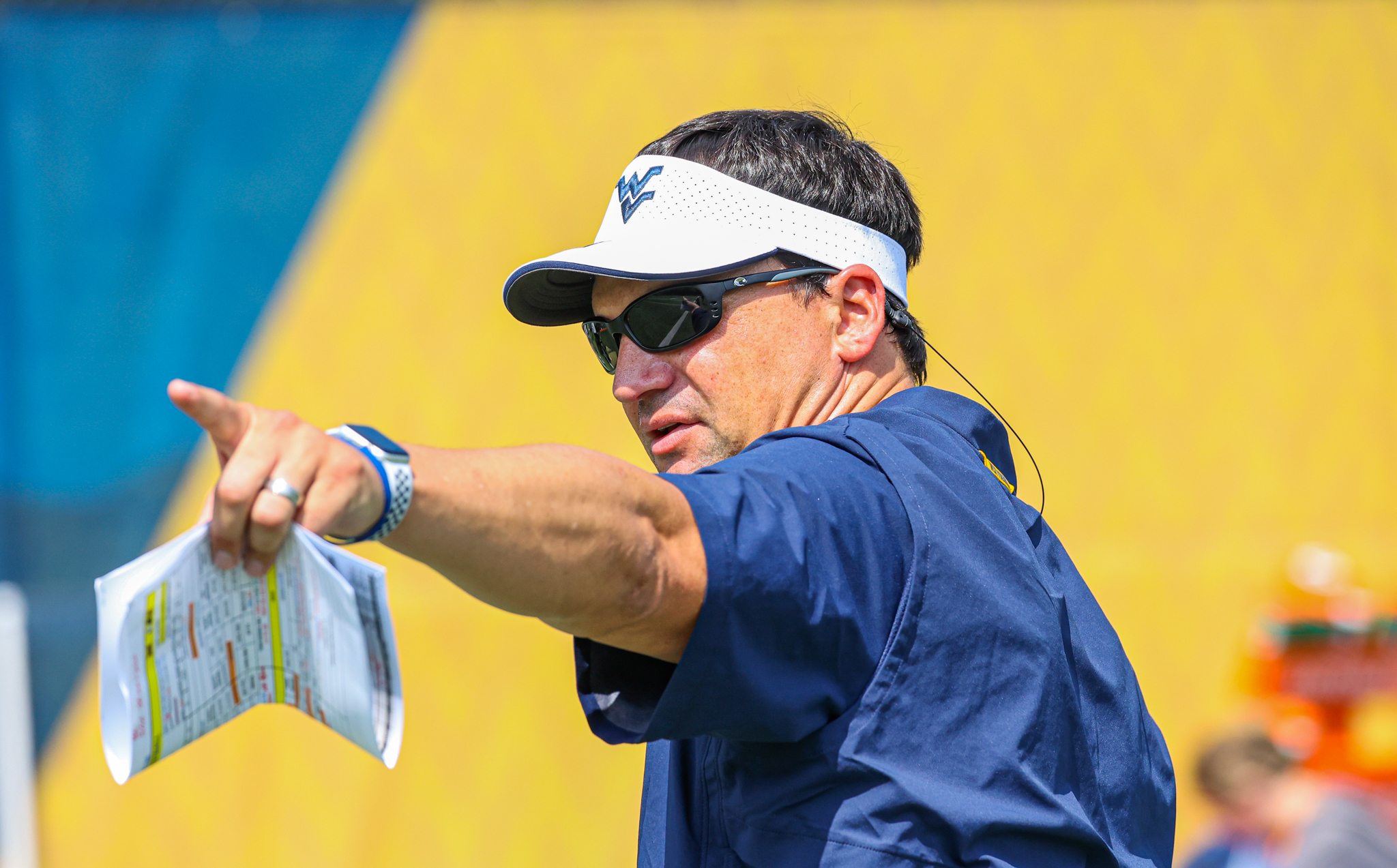 MORGANTOWN, W.Va. — Entering Neal Brown’s fourth season at WVU, depth has been built up at seemingly all positions on the field. But there could still be opportunities for true freshmen to make an impact this season. If unprompted praise from the head coach is any indicator, CJ Donaldson could be in the mix for playing time right away.

On two occasions in his post-scrimmage press conference on Thursday afternoon, Brown cited Donaldson as a player that has stood out in the first two weeks of preseason training camp. Donaldson is listed as a 6-foot-2, 240-pound tight end on the Mountaineer roster but he has been getting a number of reps at running back.

“The more I got to know him, I knew he loved football,” Brown said. “Right now we have a need at running back and that’s where he is going to play. But man, he gives us a lot of versatility and he is just good with the ball in his hands. He just makes plays. Is he going to be ready to be a major contributor week one? I am not saying that. But it was a great pickup for us. He is going to make us a lot better offensively with his versatility and his ability to do a bunch of different things.”

“How you play your senior year still matters. He played exceptionally well as a senior. It helped that Trey [Lathan] was already committed to us. He played really well and I was just intrigued by his athleticism. He played slot receiver and a little bit of running back, a little bit of H-back. But he was just a really good football player.”

Moving pieces on the offensive line

Competition continues for what figures to be the lone open starting spot on WVU’s offensive line. Two-year starter Brandon Yates and Virginia transfer Ja’Quay Hubbard remain locked in a battle for the right tackle job.

“I think that Brandon Yates has come on. It is hard to judge today until I watch it. But the two previous days he has been much improved. I think he feels more healthy. So that has been good to see.”

Wyatt Milum is atop the depth chart at left tackle. Doug Nester and James Gmiter should lock down the guard spots and Zach Frazier is set at center. Throughout the first two weeks of practice, presumed starters have been getting reps at other spots on the line. That could possibly lead to more snaps for Jordan White, who is one of WVU’s best reserve linemen.

Gmiter did not practice on Thursday but Brown expects him to return to action early next week.

JT Daniels, Garrett Greene, Goose Crowder and Nicco Marchiol all continue to share the reps equally at quarterback. Brown says the quartet all get the same amount of drives but not necessarily the same amount of plays in practice. With the season opener still 21 days away, Brown says it there is no immediate need to shift more snaps to the eventual starting signal caller.

For the second consecutive year, the Mountaineers begin their season by playing at a ‘Power 5’ conference opponent. West Virginia did not respond well to the challenge last fall, losing at Maryland 30-24. The Mountaineers turned the ball over four times in the defeat. Brown says he and his staff have looked at ways to alter preseason practice plans with the hopes of finding their peak on September 1.

“We did not perform very well in that Maryland game last year. It was kind of something that we really studied going back to January and the spring is how we did fall camp. We have redone and our calendar is different. How we practice is different. How long we go, what time we get the kids out of here in the evenings, the number of off days, all of this kind of stuff we have changed almost a 180 about how we have approached camp in mind to be as good as we can possibly be on that Thursday night in Pittsburgh.

“You are not going to know how it all plays off until you play.”

At the beginning of preseason practices, Neil Diamond’s hit song “Sweet Caroline” has frequently been played over the speakers. The song is a staple at Pittsburgh football games.

“We are just trying to get them ready for the atmosphere. When you have rivalries, some of it is fun too. We’ve been doing them, if you remember going back to spring ball we played that. And they did it all summer. So when we started practice, we were still playing it. It is fun.”