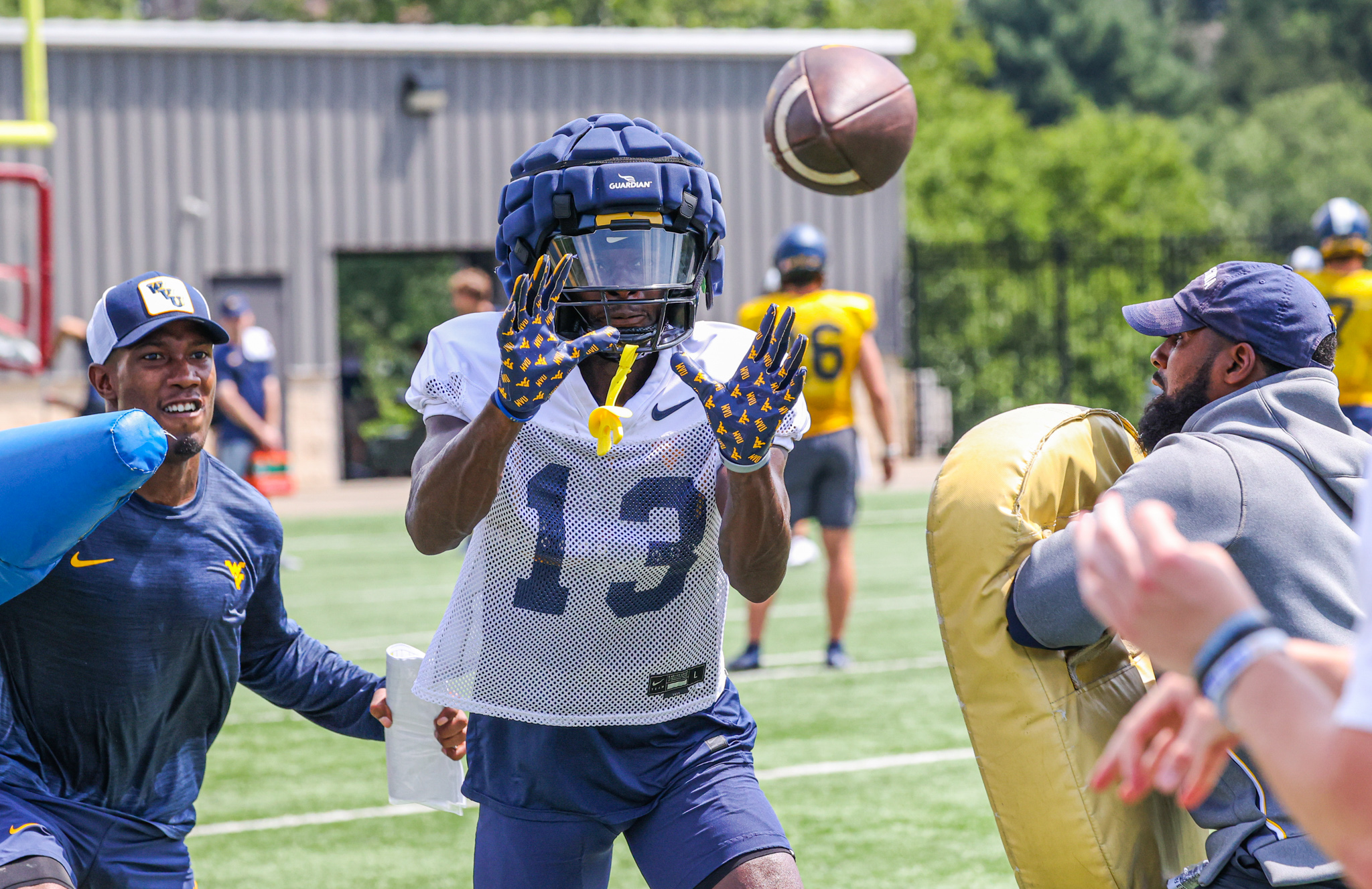 MORGANTOWN, W.Va. — West Virginia’s punt return unit struggled to ever find its footing throughout the 2021 season.

Of 130 FBS teams, 18 finished the campaign with fewer than the Mountaineers’ 59 yards on punt returns, while only four averaged less than the team’s 3.1 yards per return.

Save for the since departed Isaiah Esdale’s 27-yard return in a victory against Iowa State, West Virginia averaged a paltry 1.7 yards on its over 18 punt returns.

Esdale, who has since left to play at Rice, accounted for 13 of the team’s 19 punt returns, meaning the Mountaineers will be breaking in a new primary punt returner in 2022.

At this point, the responsibility appears to belong to Sam James, a veteran wide receiver with only one punt return to this point in his college career.

“I did return kicks and punts in high school,” James said. “Being able to come back and do it again, it has gotten a lot harder, because the kickers are obviously better than what I faced in high school. My biggest thing is tracking the ball off the punter’s foot. I’ve gotten a lot better at that throughout camp and throughout spring, because I caught a lot during spring.

“But being in that role, I’m able to show people that I’m more versatile and I can help a lot more on the field/ It’s been fun for me to go out there and catch punts and return.”

James is also in the mix as a kick returner. A season ago, that duty was primarily handled by wideout Winston Wright Jr., who has since transferred to Florida State.

Wright began last season with a bang, setting a single-game program mark with 217 yards on five kickoff returns in a season-opening loss at Maryland, then following it up with a 90-yard kickoff return for a touchdown in a victory over Long Island.

Those performances went a long way toward West Virginia averaging 24.9 yards per kickoff return, and while the unit fell off some in the latter stages of the season, that mark was still good for No. 19 nationally.

“Kickoffs are a lot easier because it’s a straight line and it’s end over end,” James said. “Punt is a little different, because you have to judge off the end of the ball depending on how it’s coming down. If it’s coming down a straight spiral, it’s going to go a little bit left. If it’s wobbly it’s going to fall right and short. Just seeing it off the kicker’s foot and seeing what type of ball it is to be able to adjust to it.”

As James alluded to, fielding punts is far more complex. Although the Richmond Hill, Ga., native lacks experience doing it at this level, he’s received pointers in preseason camp from one of the more accomplished punt returners in NCAA history — Charleston native Ryan Switzer, who starred at North Carolina and played five seasons in the NFL before recently announcing his retirement from football.

“Thank God that Ryan’s here to help with that, because in his college career he had a lot of punt returns,” James said. “Picking his brain, listening to him and what he has to say has been great for me.”

West Virginia’s secondary has a heavy influx of transfers from the FCS level.

Along with cornerback Charles Woods, who made a name for himself in Morgantown last season after arriving from Illinois State, the Mountaineers have welcomed a trio of players expected to contribute on the back end in 2022: Cornerback Wesley McCormick from James Madison, safety Marcis Floyd from Murray State and spear Jasir Cox from North Dakota State.

“There’s a bunch of FCS guys who can play at the FBS level, but maybe we’re overlooked or didn’t have the offers coming out,” Floyd said. “It’s about getting that opportunity to transfer up and show what you can do at this level.”

For Floyd, that opportunity comes while changing positions. After playing cornerback for the Racers each of the last three seasons, Floyd will handle a new role with the Mountaineers.

“From corner, you just listen to what the safety says and now I’m at safety and it’s like I’m the quarterback of the defense,” Floyd said. “So I have to tell those guys what to do all the time now.

While Floyd has yet to play a game for the Mountaineers, the redshirt junior can already notice differences moving up a level in competition.

“The big difference is the speed, the size and how the game goes,” Floyd said. “The game goes a lot faster at this level. The quarterbacks are much smarter and can read the defense way more.”

Some of the more welcome news West Virginia received in the offseason was an announcement from defensive lineman Dante Stills that he would return for a fifth season of college football with the Mountaineers.

A first-team All-Big 12 Conference selection last season, Stills is the program’s active leader in sacks (19) and tackles for loss (43.5), while having made 26 starts in 47 career games.

Second-year WVU defensive line coach Andrew Jackson believes Stills’ final go-around in Morgantown has a chance to be his best season yet.

For Stills to reach the level both he and Jackson desire he play at, the defensive line coach wants to see the Fairmont native simplify things.