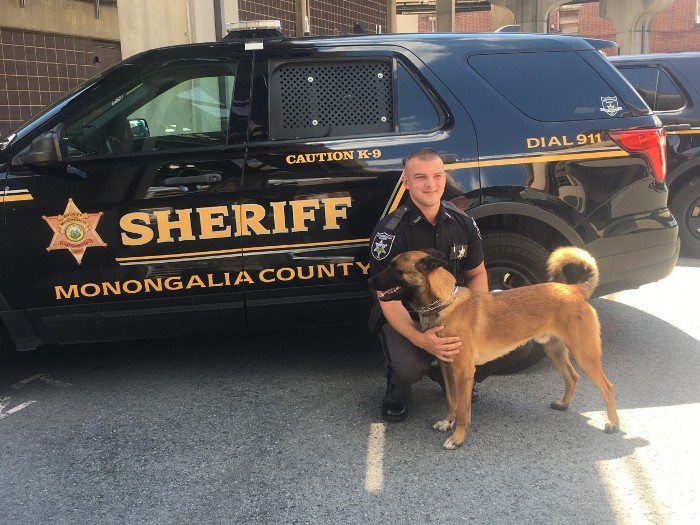 Since 2014, Azim has patrolled the county with his handler Sgt. Tim Hunn. In recognition of his service, county commissioners voted to allow Azim to retire into the care of Hunn.

“A lot of laying on the couch, which he does anyway, but he’ll do a lot more of it,” Hunn said. “He’ll run around with my kid- that’s about it.”

While on duty, Sheriff Perry Palmer said K-9 officers live with the family of the handler. So in retirement the routine will change for Azim, but he’ll still have familiar faces and surroundings.

“The rest of his life will be with the people he grew up with, Tim’s family,” Palmer said. “So, it’s a win, win for everybody.”

Another K-9 officer, retired last November, so the department has welcomed two new K-9 officers to the force.

“We can do article searches for narcotics, weapons or anything that could lead us to solving a crime or pinpointing a suspect,” Hall said.

The dogs are purchased and trained with proceeds from forfeitures in drug cases. The dogs are trained for specific disciplines like explosive or drug detection, tracking or apprehension at Shallow Creek Kennels.

“He’s trained the odor of cocaine, heroin and methamphetamine,” Hall said about Jagger. “He also does tracking for missing persona or wanted suspects.”

Palmer said K-9 officers contribute to day-to-day operations, but also participate in special enforcement activities. Palmer said the K-9 also give the deputy handler a partner that most deputies don’t have.

“Interdiction on the interstates and major roadways,” Palmer said. “They’ll work overtime to try to slow down the drug trade.”

Both, Hall and King are grateful for the opportunity and look forward to serving the citizens of Monongalia County.