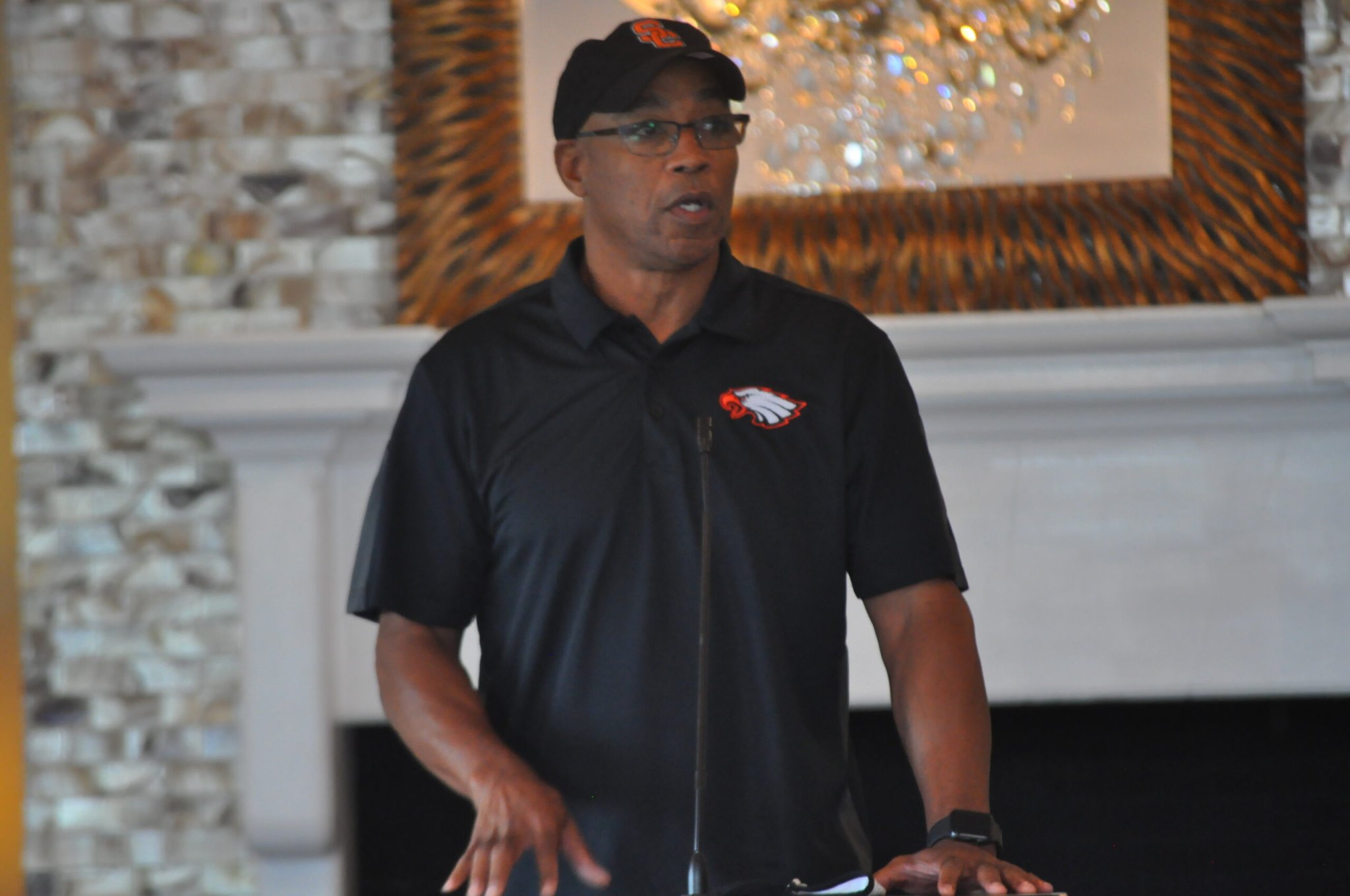 SOUTH CHARLESTON, W.Va. — As Carl Lee prepares for his first season as head coach of South Charleston’s football program, he does so with a reshaped roster that will be forced to navigate one of the state’s more challenging schedules.

Yet Lee, a Marshall Hall of Famer who went on to play a decade-plus in the National Football League, says wins and losses aren’t necessarily the top priority in his initial season guiding his alma mater.

“Anybody can look at our schedule and know it’s tough. It doesn’t matter to me,” Lee said. “We’ll play you as hard as we can. We will shake your hand at the end of the game and wish you luck afterwards, because we’re happy to compete and we will give you everything we have. However the score ends up, that’ll be South Charleston. I’ll be responsible and take credit and blame.”

The Black Eagles list only six seniors to go with 11 juniors on what’ll be a new-look team.

In addition to former head coach Donnie Mays moving on to Hurricane after a nine-year tenure that included one state championship and runner-up finish at SCHS, the Black Eagles lost several all-state caliber players in experienced quarterback Trey Dunn, who moved to Myrtle Beach, wide receiver/defensive back Wayne Harris and linebacker/running back Mondrell Dean. The latter two are now at Huntington and Hurricane, respectively — a pair of six Class AAA playoff teams from 2021 on South Charleston’s schedule, which includs five straight to start the season.

“Everybody’s role is different,” Lee said. “We have to find a way to take everybody’s goals and best and bring it together for every game. Then everybody’s success will be found after that. I buy into that. I don’t know anything else.”

The first test for Lee and company comes Thursday, August 25 against Morgantown when high school football season starts with the Kickoff Classic presented by The Health Plan. The matchup will start at 7 p.m., and be carried live by the MetroNews channel at www.wvmetronews.com and AT&T SportsNet.

Lee will have a much better idea of where his team stands after the contest against the Mohigans, one of five teams the Black Eagles beat last season during a 5-1 start, before dropping each of their final five contests.

Yet that team will hardly look like this one, taking on a new identity with Lee and featuring a different cast of characters largely looking to make a name for themselves. Lee hopes the team prides itself on its work ethic.

“In most cases, we don’t know how hard we can work until we find a reason to push ourselves or to allow somebody to push you that far,” Lee said. “I had a 17-week workout program for four weeks of camp in the pros and 16 weeks of a season. I spent more time working out than I did playing the game. These kids have to understand success is found in that ratio. If you want to win a championship or be a doctor, take the love of both of those and put them in trying to be the best that you can be.”

Outside of defensive lineman Mari Lawton and two-way lineman Jayden Barnett, the Black Eagles are largely inexperienced and out to prove they belong.

Lawton, the younger brother of former SC standout and current West Virginia defensive lineman Zeiqui Lawton, wreaks havoc defensively and will certainly be a focal point of the opposition’s offensive game plan. He has several Division I offers, including one from Cincinnati, where his older brother redshirted in 2021 before transferring. He also holds a Coastal Carolina offer.

“As I walked in, we had players walking out. Trying to figure out who would actually be there August 1st was a challenge,” Lee said. “When I went to look for a staff, I wanted coaches that had played the game, coaches who had potentially played college ball, because the ultimate goal for most high school players is to play in college. So I wanted them to hear from coaches who had coached in college or played in college.

“We have a host of young players, and that’s not saying freshmen — it’s just young players that have not played. What I have found in those young players is the excitement that most of us who have played or coached football find in ourselves.”

Lee himself has a wealth of coaching experience, including a decade-long stint as the head coach at West Virginia State two years after his playing career ended.

A 1979 graduate of South Charleston who garnered three Pro Bowl selections as defensive back on the the Minnesota Vikings, Lee says he couldn’t pass up the opportunity to lead the Black Eagles.

“Taking the South Charleston job was nowhere on my radar. When coach Mays decided to leave, I started getting calls about coming,” Lee recalled. “I got a few calls that made me think, ‘Well OK, I owe the city of South Charleston, because it’s been good to me.’ There were enough people in the city who wanted me there and people who matter that wanted me there. I could not pass that up.”