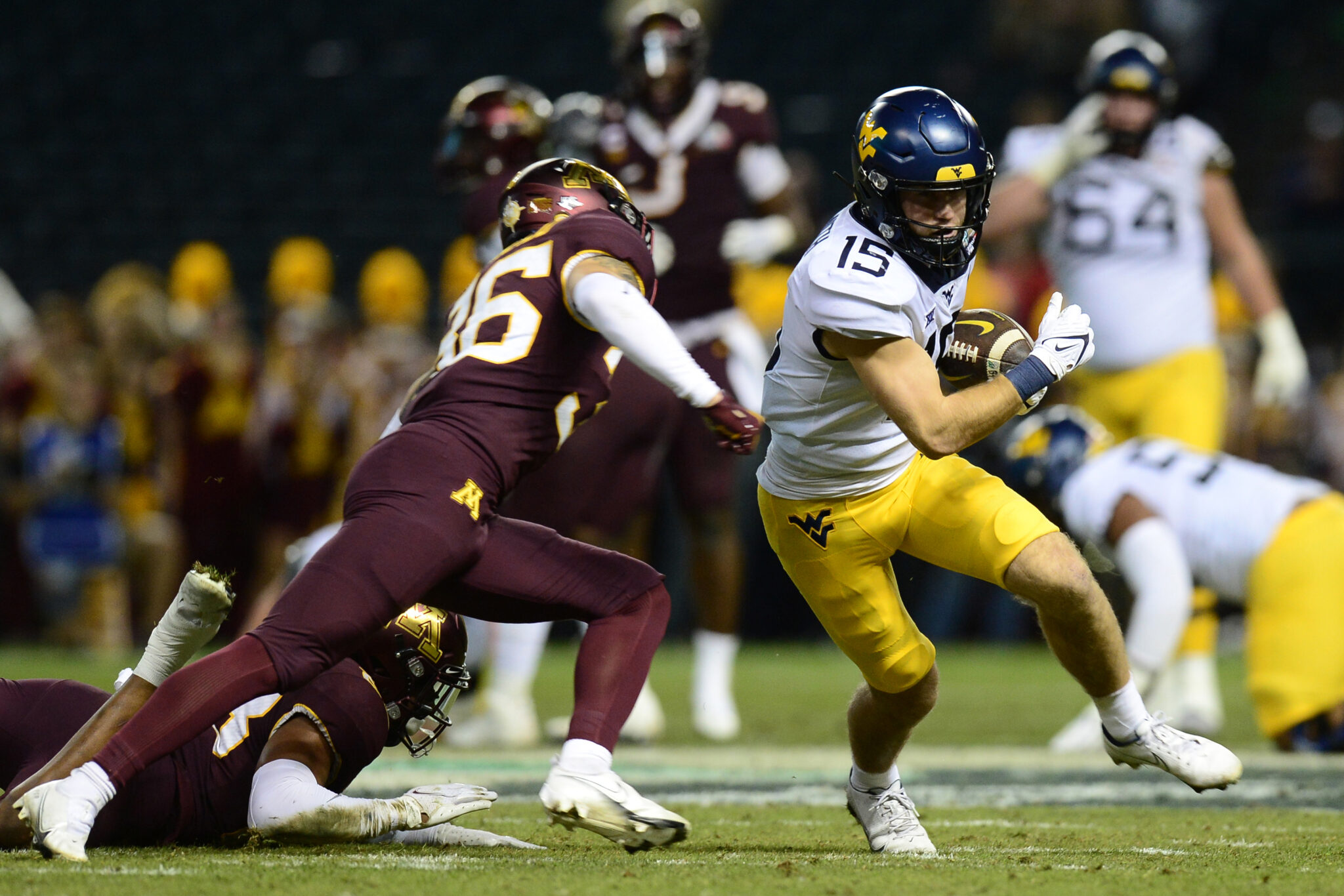 MORGANTOWN, W.Va. — Over his first two seasons at West Virginia, wide receiver Reese Smith showed flashes that he belonged and could be a steady contributor.

Smith’s statistics were nearly identical in 2020 and 2021, when he caught a total of 25 passes for 252 yards and one touchdown, which came last season in a loss at Kansas State.

Yet after catching 11 passes for 128 yards over 10 games of a COVID-19 impacted true freshman season, Smith didn’t make the leap he was hoping to in 2021 when he surpassed his reception total by one but for 4 fewer yards than what he had accumulated the previous year.

The Danville, Ky., native is hopeful significant improvement will be on display this season.

“Going into the offseason, I knew I had to improve on a lot of things,” Smith said. “I knew where I stood and me and coach [Neal] Brown had one of those sit down heart-to-hearts. I knew I had to get better at several things. I attacked winter workouts with [head coach for football strength and conditioning Mike Joseph] and his staff.

“In the spring, I got unlucky and pulled my hamstring, but then got to play in the spring game. I have gotten a lot faster and stronger and I knew I had to do that in order to play. Building and stacking days has definitely helped.”

In large part because of his familiarity and long-standing relationship with Brown, Smith had no reservations meeting with the head coach that had just completed his third season in Morgantown.

Smith starred at Boyle County High School, where Brown was also once a standout receiver before going on to play at Kentucky and Massachusetts.

“I went in there with a mindset of how can I be better on the field and he’s going to tell me straight up,” Smith recalled. “He recruited me ever since I was a sophomore in high school. We had one of those conversations where it was, ‘Coach I need to play more. I’m playing a lot of special teams, but I want to play a lot more offense.’ He told me what I had to do and was straightforward. Coach Mike was in there and told me what I had to do as well. I attacked every day and kept in the back of my mind what I had to get done.”

The 5-foot-10, 187-pound Smith felt he was making significant progress in the offseason, but then suffered a hamstring injury that caused him to miss much of spring football drills.

“It knocked me down. I was really frustrated at first,” Smith said. “I’m not one of those guys that’s going to feel sorry for myself and lay down. I went right back to work the next day. I was getting treatment two or three times a day and doing everything I could to get back. It was a day by day feel. I eased back into it and was fortunate enough to practice the last week and play in the spring game.”

Getting some work in during the spring also afforded Smith the opportunity to work with first-year WVU offensive coordinator, as well as newly hired receivers coach Tony Washington.

After feeling healthy again, Smith was able to learn and work on Harrell’s concepts, while also gaining valuable repetitions in April.

“I knew it was an Air Raid offense and he liked to throw it a lot,” Smith said. ‘Coach Brown pulled me aside and told me he was going to hire Graham Harrell and told me a little bit about him. I actually knew him from when he played at Texas Tech, because I watched him growing up a little bit. I feel like I fit in the offense very well. He likes to throw it and go four wide, which is good for me.”

While Smith is hoping to see his role grow offensively as a sophomore, he has played extensively on special teams each of his first two seasons at West Virginia.

It was a major adjustment out of high school for Smith, who because of his offensive and defensive prowess, rarely played special teams at the prep level.

Smith, the Mountaineers’ first commit in the 2020 recruiting class, hopes to continue making a mark on special teams in 2022, while assuming an expanded role as one of two primary slot receivers along with Sam James.

Early indications put him on track to do just that.

“Reese is having a phenomenal camp,” Washington said. “He’s been stacking up days repeatedly and playing fast. He’s repeatedly been one of the highest GPS guys in terms of speed. He’s playing really well and Reese is definitely going to see a lot of early action.”