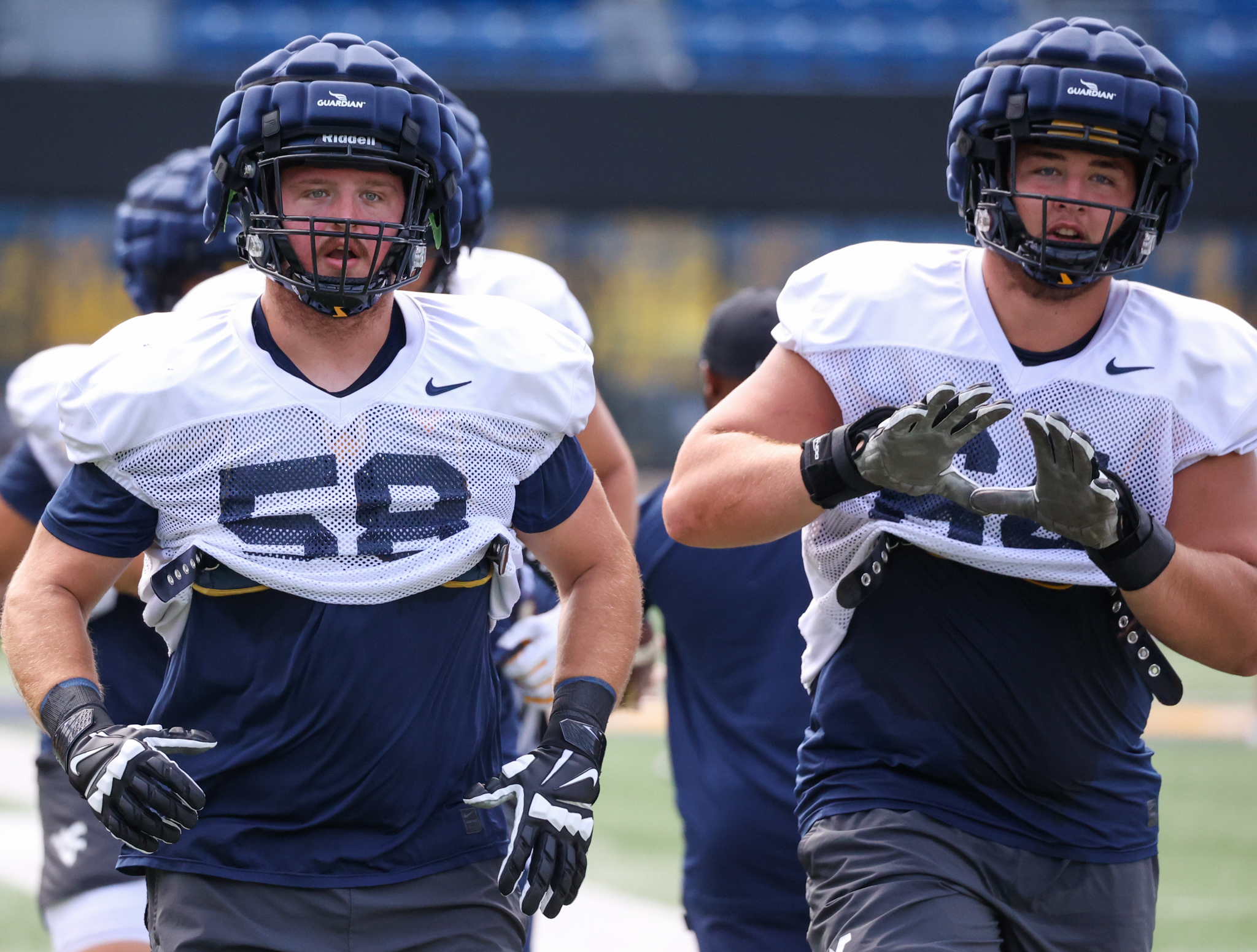 MORGANTOWN, W.Va. — A common theme centered around West Virginia’s football program throughout the offseason was change.

The Mountaineers wasted no time hiring a new offensive coordinator in Graham Harrell, and one month later, brought in Tony Washington to assume the role of wide receivers coach.

They’re assured to have a new starting quarterback as well, with former USC and Georgia signal-caller JT Daniels the assumed frontrunner.

Yet for all of the outside additions, there has also been change within the program, including moving Wyatt Milum from left tackle to right tackle ahead of his second collegiate season.

“Better on the left side, because he’s left-handed,” WVU offensive line coach Matt Moore said. “He feels more comfortable on the left side, so it’s really nice to move him over there and see him take to it the way he’s done in the offseason, spring and summer.”

Milum started eight of the 12 games he appeared in as a true freshman while splitting time with Parker Moorer before Moorer entered the NCAA Transfer Portal at the conclusion of the regular season.

“It’s always been a dream of mine to play college football, so when I got here, I wanted to start,” said Milum, a Kenova native and graduate of Spring Valley High School. “The hardest thing transitioning to college was definitely the technique you have to use. It’s a lot different from high school. You can’t use the wrong technique and block somebody in college.”

Milum, who missed last season’s loss at Baylor with an injury, took on an expanded role on the right side as his true freshman campaign progressed.

Milum was named West Virginia’s offensive lineman of the week for his performance in a late October victory against Iowa State and was in for 90 plays in the Mountaineers’ win over Texas.

“There were some reality checks,” he said. “I definitely made some mistakes and I still make mistakes today. I was growing as an offensive lineman and I had to learn a lot.”

After playing last season at what he estimated was between 295 and 300 pounds, Milum has added weight. He’s listed at 6-foot-6, 308 pounds, although during his first media session as a WVU player, Milum said Saturday he’s at 311 pounds.

“I can definitely tell that I’ve gotten stronger on the field this year,” Milum said.

Milum will now see how he measures up at left tackle and likely assume responsibility for the quarterback’s blind side, so long as it’s a right-hander, which each Mountaineer at that position is save for true freshman Nicco Marchiol.

Milum’s had all offseason to grasp the concepts that come with being on the left side, though he will enter the September 1 season opener at Pitt without ever having played a snap at the position.

“I would definitely say I’m more comfortable. The game has definitely slowed down for me,” he said. “I understand what’s going on more. Transitioning to left tackle wasn’t that hard. I’ve never played on the left side before. Learning the kick step and pass pro were the only difficult things to do really.”

As Milum has increased his strength and grown familiar with what it takes to be successful at this level, more is expected of him in his second season.

“He’s really making a lot of progress. The offseason was big,” Moore said. “He came in as a true freshman last year, played in and out early and took over the job halfway through the year, but still physically, he wasn’t where we wanted him to be.

“He has a great motor and plays really hard. He’s matured, better and stronger. He’s a super competitive kid and totally different kid on the field than he is when he’s sitting here talking to you guys. That’s one thing I really like about him. When he crosses that line, he’s out for blood and he plays really hard.”

A standout baseball player in high school between his days at both Wayne and Spring Valley, Milum says he hasn’t done anything baseball related for several years.

However, Moore believes Milum’s best attribute is his athleticism.

“He can stay on his feet. He does a phenomenal job with his hands,” Moore said. “Huge baseball background, so really good eye-hand coordination.”

Now Moore hopes to see Milum take the next step in his development, which won’t come easily as he settles into his new spot.

“That’s the thing with those guys that are good early — what you’ve been is not good enough,” Moore said. “You have to keep pushing them and finding things they have to fix and continue to work hard.”

With the added strength, Milum hopes to continue displaying improvement and the play one of the more decorated in-state recruits over the last decade will be pivotal to the offensive line’s success as a whole.

“I put pressure on myself because I don’t want to let my teammates or team down. I wouldn’t say the expectation has really changed,” Milum said. “I know what I have to do and I want to do it to my best ability.”