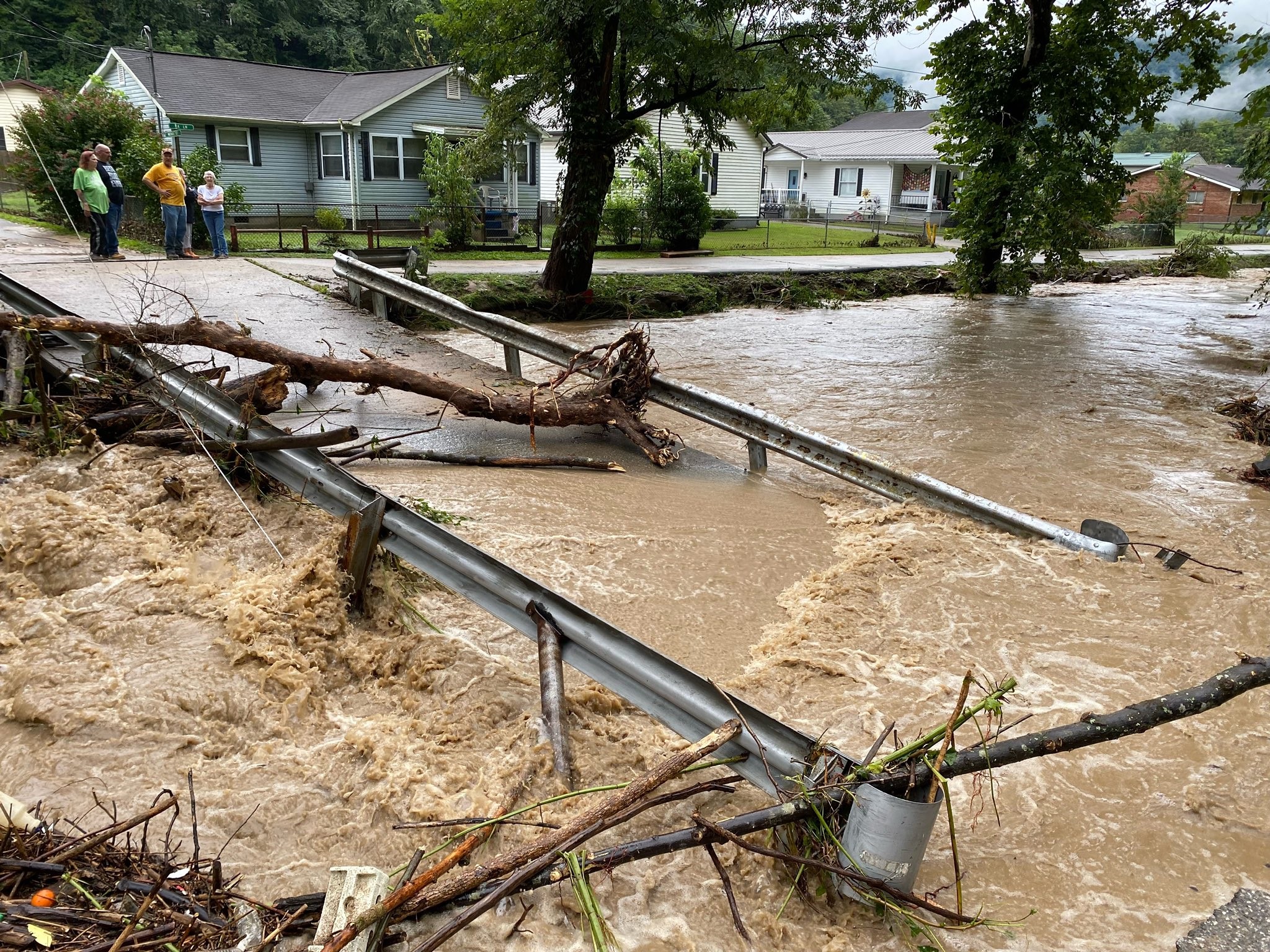 This bridge at Happy Town on Hughes Creek in Kanawha County took on lots of water in the Aug. 15 flood. (Photo by Jeff Jenkins)

KANAWHA COUNTY, W.Va. — In what resulted in Gov. Jim Justice declaring a State of Emergency for Kanawha and Fayette counties, some portions of those counties received up to five and six inches of rain overnight Sunday into Monday that resulted in flash flooding.

The Kanawha County Emergency Operations Center was opened overnight due to the record rainfall as residents in eastern Kanawha County near Campbells Creek and Hughes Creek, and in Fayette County in Smithers are cleaning up.

C.W. Sigman, the Kanawha County Director of Emergency Management told 580-WCHS in Charleston that the damage assessment is ongoing.

“We saw instances where water has been in homes. We were out on water rescue before 3:00 in the morning. Department of Highways has a lot of damage to culverts and bridges. We have some personal brides, where people get to their homes, out,” Sigman said.

Megan Kiebler, a NWS Charleston Meteorologist described the system to MetroNews as a thin ribbon of showers that traveled the Interstate-64 corridor overnight from southern Mason County into Putnam County before slowly making its way over Kanawha and Fayette counties.

“As it did, it brought heavier downpours from those showers and thunderstorms which resulted in the thin narrow band of higher precipitation amounts,” Kiebler said.

As of 9 a.m. Monday, Metro 911 of Kanawha County had answered more than 500 emergency calls and dispatched 130 calls for service, including 25 water rescue calls. Kanawha County’s water rescue teams from every volunteer department in the county and as far as Nitro and St. Albans responded to both Eastern Kanawha County and Fayette County to assist with water rescues, a release stated. Charleston Fire Department responded to numerous water-related calls inside and outside of city limits.

Sigman said the best news is that no injuries or fatalities have been reported. The Red Cross is out with Kanawha emergency first responders assisting residents. Sigman said emergency officials are waiting on a shipment of cleanup kits to offer residents.

Kanawha County Emergency Management has received preliminary reports that 100 or more houses have received flood damage in Campbells Creek, and at least two bridges have been washed out in the Hughes Creek area.

“Some of them just got water in their basement, which is bad enough. Some received water 18 inches in their house, above all sockets and things, you have considerable damage there,” Sigman said.

She said many systems have been slow moving with disturbances parking over areas, like this week’s storm, setting up for flooding. She said soil conditions have not been able to recover.

For flood victims this week, Kiebler expects a break in rain later in the week but there are always chances of an afternoon thunderstorm through the summer days.

Kanawha County residents that received flood damage are asked to report damages to the Kanawha County Planning office at 304-357-0570. The Planning Office will take information that the County will use to seek Federal Flood Aid and Disaster Assistance.