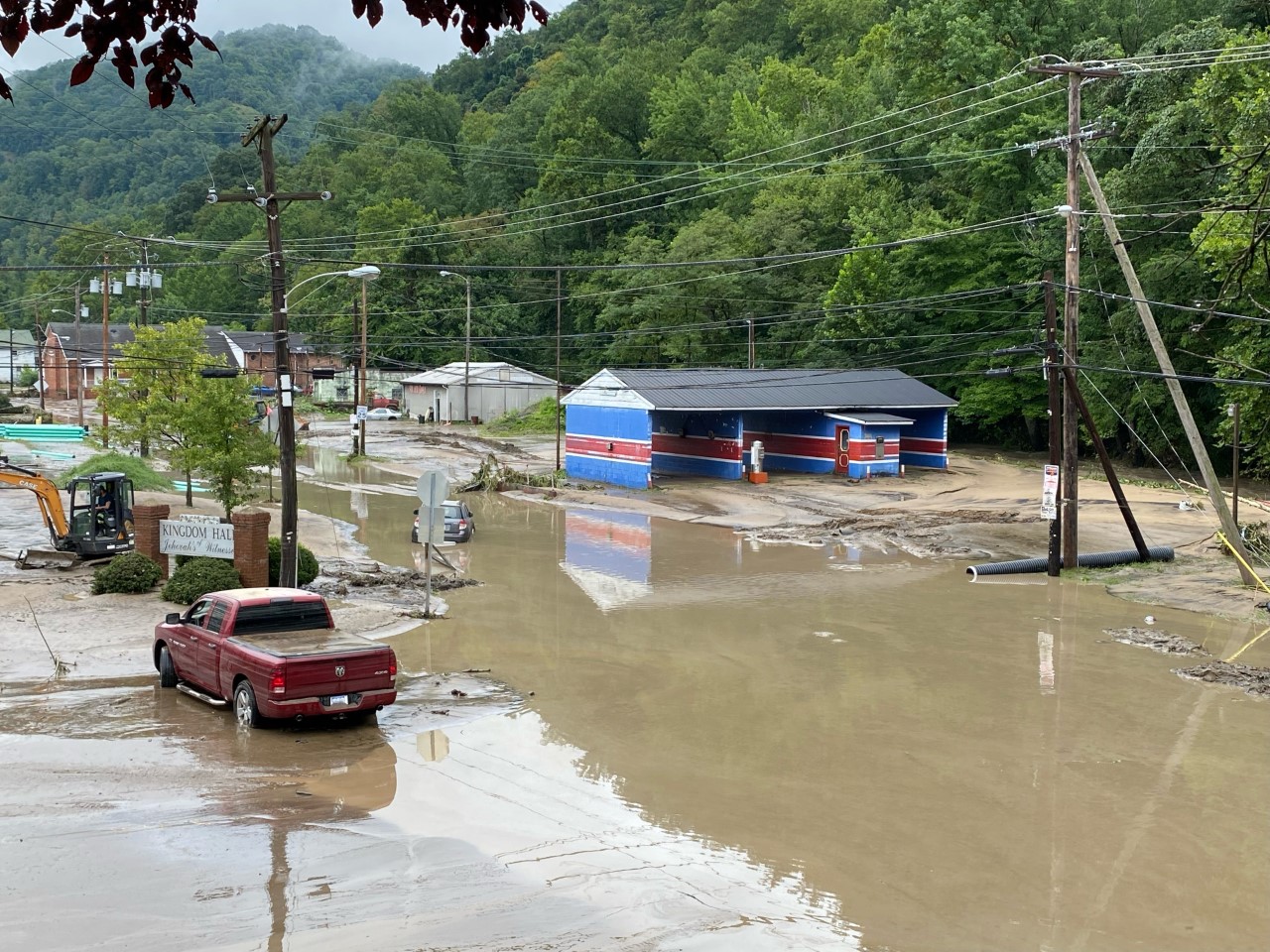 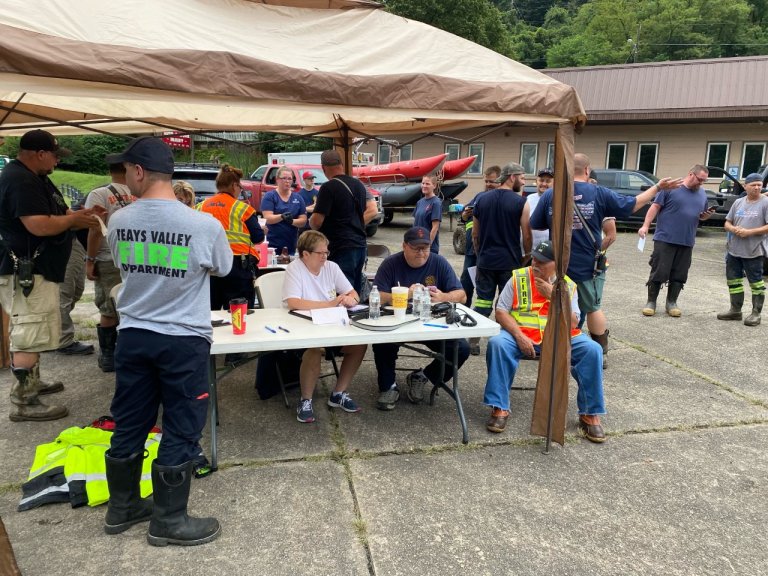 A command post in the community of Smithers prepares to strike out to various areas to survey damage and account for residents. 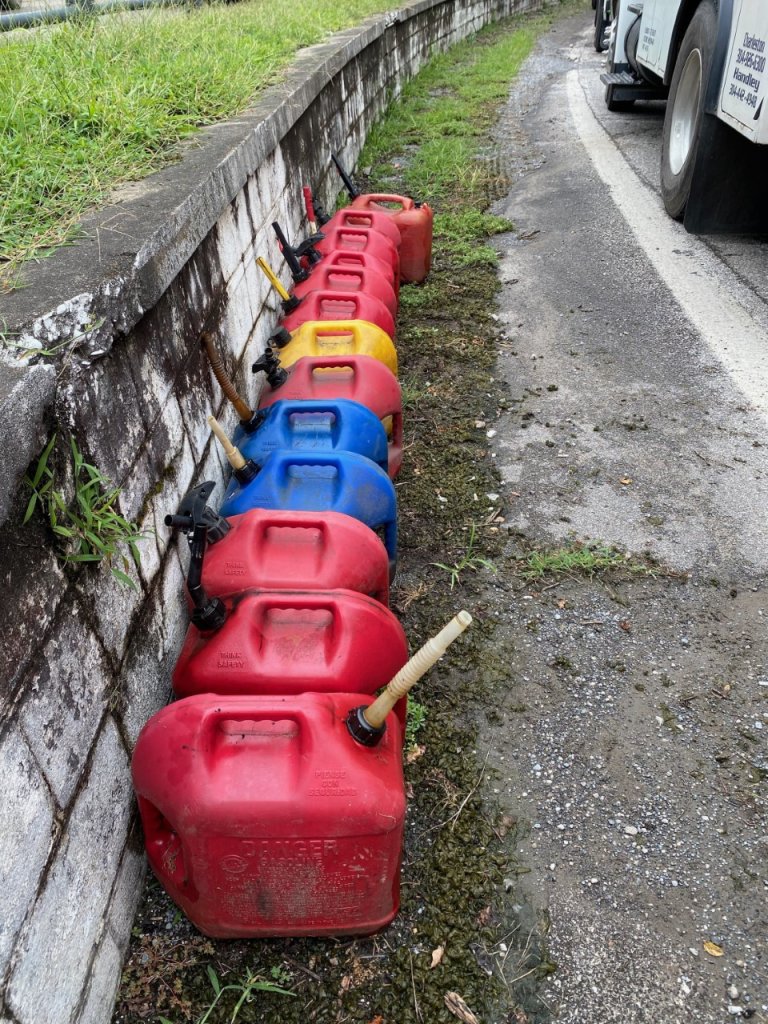 Widespread power outages have the recovery operation running on generators.

SMITHERS, W.Va. — Fayette County Chief Deputy Rod Perdue looked concerned as he gave a briefing to first responders in the Smithers area Monday morning. Water in several nearby hollows was still up and a lot of the area was in accessible. He prepared volunteer firemen, EMT’s and other volunteers for where they would need to do house to house checks to make sure everybody was okay and accounted for after a night of torrential flooding.

“There are some major bridges washed out, Route 39 outside of Gauley Bridge is going to be closed down for some time. We’re just starting to assess the situation,” Purdue said.

The region incurred much more significant rainfall and runoff than neighboring hollows downstream in Kanawha County. The further up the Kanawha River valley you travel, the worse the situation became. At Smithers, right at the mouth of Cannelton hollow an entire bottom area with cars, homes, and business was covered in mud. The tell-tale mudline on a nearby car wash looked to be about 8 feet off the ground. Another area showed a water line at least 12 feet up a wall. So far there’s no estimate on how many homes and businesses have incurred damages due to the flooding, but the number is expected to be significant.

“We’re setting up a shelter in Montgomery at the Alumni Center. The Red Cross is setting up that shelter and the Fayette County Health Department is setting up a clinic to give tetanus shots and things of that nature,” Purdue explained.

A look at Gauley Bridge – Cathedral Falls from earlier this morning.

So far there have been no reports of inquires or fatalities. Purdue hoped things would stay that way as emergency crews went through the communities doing wellness checks on residents. There were a number of homes inundated in the waters of a flash flood which came up quickly and went down just as fast.

“We do have a lot of people displaced. There are still a couple of areas we haven’t been able to gain access to due to the fact the roads and in some cases the bridges are washed out,” said Boomer Volunteer Fire Chief Mike Meyers.

One area in the Cannelton community where the bridge was lost was in Carbondale. Meyers estimated five to eight people were stranded in the area with the bridge out. Meyers and members of his department were pressed into service very early Monday morning.

“Just the amount of rain and how fast it came this morning. The creek came out of the banks, we had several people trapped in their vehicles, but we were able to get them out safely,” he said. “Back in 2001 when we had a flood it wasn’t up that high, but we had full sized pickup trucks here this morning that were fully submerged.”

.⁦@WVMetroNews⁩ trying to get the mud out of the road on Cannelton Hollow pic.twitter.com/1Zkm6SvEC0

Meyers also confirmed heavy damage to Route 39 outside of Gauley Bridge in the Brownsville area. The road is closed for the time being. Nearby Cathedral Falls, a popular tourist sop along Route 60, was a raging waterfowl at the height of the storm runoff early Monday morning.

Jeff Jenkins contributed to this story.