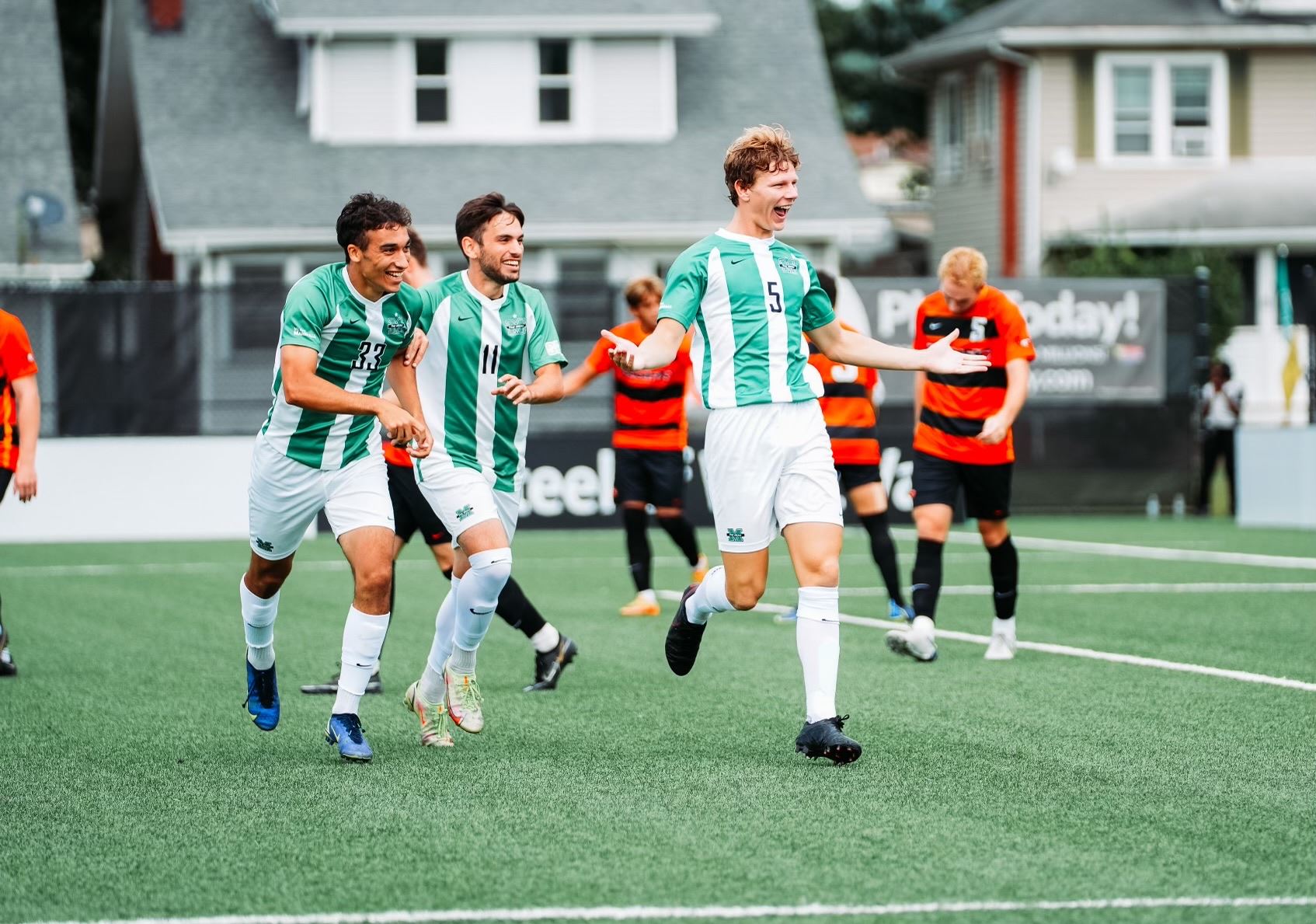 Marshall's Ryan Holmes celebrates one of his two goals against Pacific. Photo by Austin O'Connor/Marshall Athletics

The No. 8 Thundering Herd’s previous high for goals was five in the season-opening win over VCU at Hoops Family Field.

Marshall’s scoring had a local flavor early as Ryan Holmes, a freshman from Cabell Midland High School, found the net for the Herd’s first two goals. He got the first at 2:17 with assists to Vinicius Fernandes and Joao Souza. His second came at 18:21 and put the home team ahead to stay at 2-1.

“As you could tell from the celebration, you could tell I was really surprised,” Holmes said. “I didn’t think I was going to score, but it was a team-effort, a team-win today.”

Souza had an unassisted goal at 29:38 and Kenzo Briton tallied off an assist from Adam Lubell to give Marshall (3-1) at 4-1 lead at halftime.

Herd coach Chris Grassie was delighted to see his team pick up a victory on the warm, sunny day. The win was No. 60 for him at Marshall.

“It was a very impressive response after halftime. We challenged the guys to step up their intensity. It was a hot and humid day today, and I felt we were too comfortable with clearly being the better team,” Grassie said. “No disrespect to Pacific, they play a lovely possession game, but they played on Friday (at Xavier) and might not have had enough subs today to keep going. In the second half, our intensity was through the roof. That’s what we need to do to be champions.”

Agustin Iusem got the first goal of the second half for the Herd at 52:09 with help from Ibrahima Diop and Alexander Adjetey.

Matthew Bell, the team’s goal leader, got in the scoring act late with a pair. Adam Aoumaich got the assist at 69:34 and Lubell the helper at 73:15 to round out the scoring. Bell’s output gives him six goals for the season.

“I didn’t score in the first half. I was disappointed in myself, but to come back in the second half (and score two goals), I’m proud of myself,” Bell said.

Herd goalkeeper Oliver Semmle allowed one goal and got the win. The Tigers (1-4-1) had just two shots on goal.

Marshall kept Pacific keepers Eric Cotton and Brian Lanier busy with a 12-5 edge on shots on goal. Cotton played the first half and Lanier in the second.

“Full credit to Marshall,” Tigers coach Adam Reeves said. “They are as talented a team as I’ve played against. We would have liked to have had a full roster to match up, but that’s the season thur far.”

Marshall, a Sun Belt Conference member, prepares for league play and must encounter a tough stretch before September ends.

The Herd starts with a contest against Kentucky at 7 p.m. Friday in Lexington. The No. 5 Wildcats (4-0) played at Tulsa on Sunday night and then are off until the Herd visit. UK was picked third in the Sun Belt preseason poll.

“I love going there (to Lexington). We’re two different teams in terms of style, but they’re a very good team,” Grassie said. “It’s going to be a heck of a game.”

West Virginia, the preseason pick to win the Sun Belt, comes to Hoops Family Field on Saturday, September 24. Game time is 7:15 p.m.. The Mountaineers currently are 2-3.