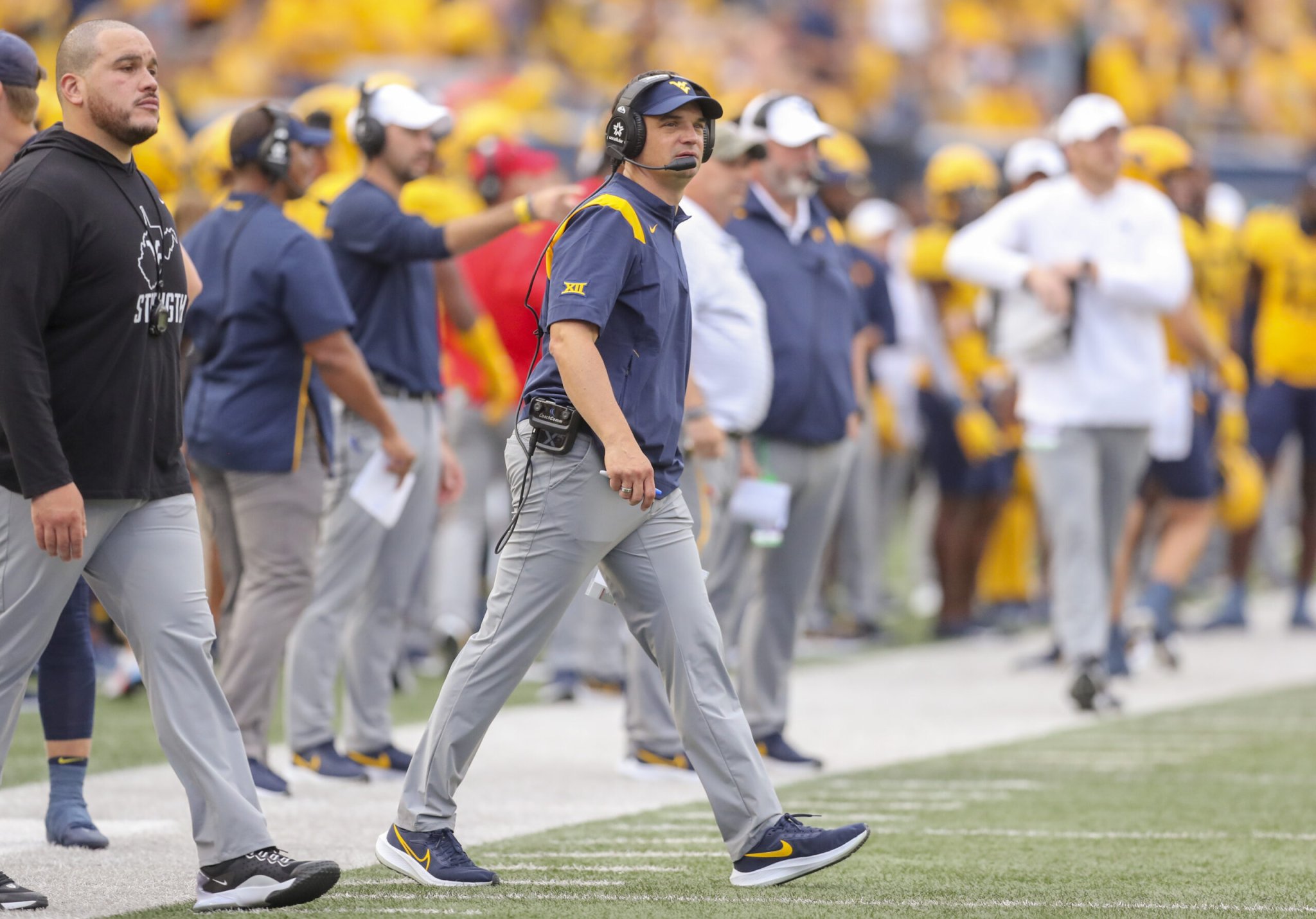 MORGANTOWN, W.Va. — No matter how much they try to avoid it, West Virginia coaches and players alike hear the outside noise.

Having lost their first two games for the first time since 1979, the Mountaineers have squandered an opportunity to start strong in Neal Brown’s fourth season as head coach.

A frustrated WVU fan base is left wondering if for the third time in Brown’s four seasons, the Mountaineers will finish with a losing record, while recognizing they have to finish no worse than 6-4 over the remaining 10 contests to qualify for a bowl game.

“Negativity is never good, but this is big-time football,” Brown said. “There’s pros and cons to it. If you’re affected by outside noise now, you’re going to be affected your whole life.”

Brown is, however, plenty understanding of the fans’ frustrations and believes he can at least relate to their feelings to an extent.

“I get the fans’ frustrations,” he said. “Both of my parents are teachers. We had season tickets at the University of Kentucky in the upper deck. They’ve changed fortunes since then, but they weren’t winning a whole lot then. I can remember a lot of rides home in an old, beat up van with my uncle and some of their friends and them [complaining] about how they played and being frustrated because they spent money on tickets and concessions, and it didn’t go the way they wanted it to go. I don’t need to be explained that. I lived that, so I get it.”

A strong case can be made that changing two plays to this point would have the Mountaineers 2-0 as opposed to 0-2. Yet that’s not something Brown wants to hear after his team faltered down the stretch in a season-opening 38-31 loss at Pitt, before struggling defensively throughout a 55-42 overtime setback to Kansas in the home opener.

“You don’t sugarcoat these things,” Brown said. “The brutal reality is we’re 0-2. Here’s what happens, and this comes from a really good spot, and it even happens to me — the people that you’re around the most and really care for you the most, they want to protect you and they want you to know that everything is going to be OK. They’ll say, ‘It’s OK’ or ‘You did the best you could’, or ‘Maybe it’s not your fault. It’s the coaches fault or somebody else.’ That’s B.S. That’s not accurate.

“The bottom line is it’s not OK. We’re 0-2 and haven’t done the things we need to do to win football games.”

Brown doesn’t want his players focused on negativity, but also doesn’t want them honing in on what if scenarios as a result of being winless entering Saturday’s Week 3 matchup with Towson.

“The noise that hurts is, ‘Man you all are so close. You could be 2-0.’ Yeah, we could be, but we’re not and let’s focus on why we’re not, getting that corrected and how we get better moving forward. We could be sitting here 2-0. I also could be an NFL player if I was a little faster.”

That message appears to have gotten across to center Zach Frazier, a Fairmont native starting for the third straight season.

“People will tell you, ‘Oh, you’re so close. You almost had it.’ But almost and it’s OK are really not OK,” Frazier said. “It’s not the result you want, but we have a chance to fix it and we have to do that.”

The process of fixing the issues began Sunday for WVU hours after losing to the Jayhawks, who although appearing to be much-improved, are a program with eight Big 12 Conference wins since 2010.

“You can’t change it. It’s over,” Frazier said. “When you’re looking back watching the film, it’s kind of what could I have done to change that? The game’s over, but hopefully you look at those things, learn from it and then it doesn’t happen again.”

That’s at least part of Brown’s message to his team as it seeks a turnaround and its first victory against the Tigers.

“The only people that are going to fix it are inside this building and the only way to fix it is through work,” Brown said. “Nobody feels sorry for us. We don’t feel sorry for ourselves. We’re not throwing in the towel. We’re going back to work and it’s about learning from your failures.“

As for the results themselves, a myriad of issues have plagued the Mountaineers, though Brown believes a disparity in turnovers has plagued his team as much as anything.

The only turnover West Virginia has forced came in the second quarter during its loss to Pitt when linebacker Lee Kpogba recovered a fumble, and it was canceled out two plays later when wideout Kaden Prather lost a fumble. That was the first of WVU’s four turnovers through two games. Both interceptions thrown by JT Daniels have been returned for touchdowns.

“Why are we sitting here 0-2? There’s three primary reasons and some underlying things,” Brown said. “The first one is it’s 27-0 points off turnovers. We’ve created one takeaway and turned the ball over four times. We’ve had inopportune penalties and missed opportunities. There’s three fumbles on the ground Saturday night and we didn’t get them. We dropped passes in the Pitt game.

“We have to learn from those failures and clean up the inopportune penalties. We have to get some takeaways. We can’t turn the football over. We have to take advantage of opportunities when they arise.”

Along the way, Brown wants to see players focus on what they can do individually for the greater good of the team to produce desired results.

Part of that process includes keeping the focus in-house and avoiding distractions.

“I remember coach Brown told us a couple weeks ago, ‘Don’t accept criticism from anybody you wouldn’t take advice from,’” Prather said. “I’ve been living by that for the past couple weeks.”

Sports
Independence & Herbert Hoover each in third seasons of ascents in Class AA
MetroNews will broadcast all three Super Six contests at wvmetronews.com.
By Joe Brocato
Sports
Setting the stage for Saturday's Class A championship game
MetroNews will have broadcast coverage of all three state championship games.
By Joe Brocato
Sports
West Virginia discovers offense in 89-58 victory over North Carolina Central
The Mountaineers shot 54 percent and had four players score in double figures as they responded well from their first loss this season.
By Greg Carey
Sports
Marshall slows Akron for sixth straight win
The Thundering Herd started fast in a 68-57 win over the Zips.
By MetroNews Staff