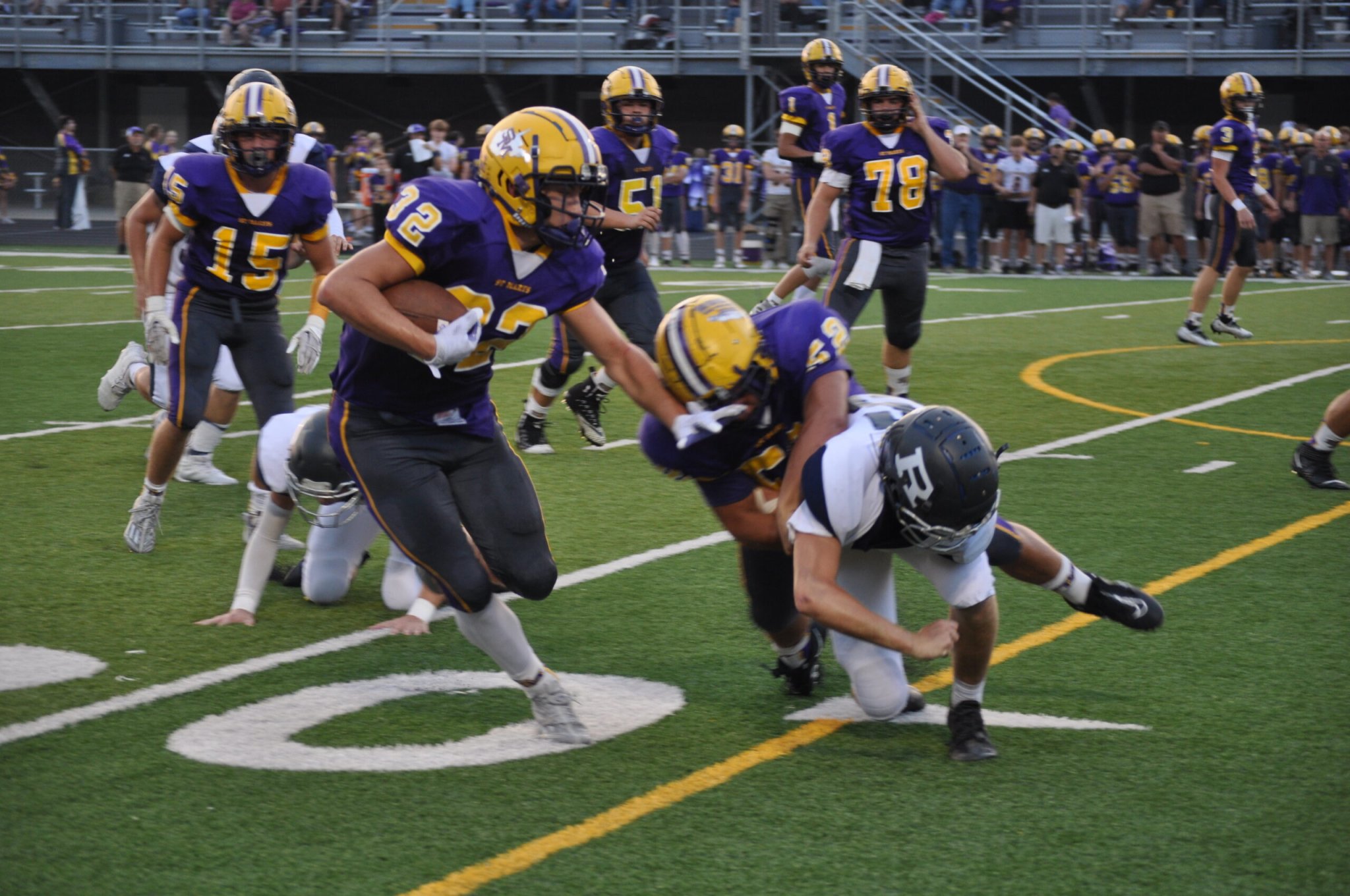 ST. MARYS, W.Va. — In large part because of its experience and size, St. Marys overwhelmed Ritchie County for a 67-18 victory Thursday at Bill Hanlin Stadium.

The Blue Devils dominated the line of scrimmage on both sides of the ball, paving the way to a 41-6 halftime lead in a game St. Marys had well in hand from early in the second quarter on.

“That’s where it starts as far as being able to move the ball on offense and the defense being able to stop teams from moving the ball,” St. Marys coach Jodi Mote said. I feel like our guys did the job up front. Credit our coaches working with them and credit to the guys for getting the job done.”

Although St. Marys (3-1) turned it over on downs just outside the red zone on the game’s opening sequence, it proved not to be a sign of things to come.

After forcing a three-and-out, the Blue Devils covered 49 yards in three plays, scoring on Noah Wince’s 9-yard run for a 7-0 lead.

Later in the opening quarter, St. Marys converted on fourth-and-4 with Joey Ramsey’s 8-yard run, before Ramsey reached pay dirt on a 6-yard scamper that left the Blue Devils with a 14-0 lead at the 1:03 mark.

The 6-foot-3, 210-pound Ramsey has the makeup to handle his role as a primary ball carrier, a role he stepped into following the loss of Josh Roush, the Blue Devils’ leading rusher last season who was injured in the preseason, played in the opener, but is now sidelined for the season.

“We had to rework what we were doing so we had to move guys around and settle on some stuff,” Mote said. “The guys have gotten the rhythm of that and done a nice job with that. I’m proud of our staff and the guys for coming out here and making the plays.“

Ramsey’s 11-yard touchdown run 1:01 into the second quarter upped the advantage to 21-0.

It looked as though the lead would grow again moments later following an exchange issue on a Rebels’ punt, but Josiah DeMoss was stripped just before crossing the goal line, and Ritchie County’s Ethan Haught took the recovery 99 yards for the Rebels’ first points.

Any thought of the Rebels garnering momentum was put to rest when St. Marys’ Logan Eddy returned the ensuing kickoff 63 yards for a touchdown, leaving the Blue Devils with a 28-6 lead 9:27 before halftime.

Ramsey’s 8-yard touchdown run and a 6-yard TD run from DeMoss enabled the Blue Devils to lead by 35 points at the intermission, which the Rebels entered without having picked up a first down.

“We have a big task ahead of us, because we are so young and inexperienced up front,” Ritchie County coach Rick Haught said. “We can throw the ball, but we don’t have time. Against a very physical defense like St. Marys throws at you, it causes us problems.”

On the other hand, Mote was pleased with his defense’s ability to work together and gang tackle.

St. Marys’ 6-foot-7 quarterback Luke Powell threw a 33-yard touchdown to Wince for the first points of the second half, and after recovering a fumble on the next play from scrimmage, the Blue Devils gained a 53-6 lead on an Ashton Boron 5-yard TD run.

Haught threw a 2-yard touchdown pass to Tristen Ginanni on Ritchie’s ensuing series that left the Rebels with a 53-12 deficit.

“Stay healthy and humble. I’ve always believed that way and one you can control,” Mote said. “If you stay humble, you’ll keep working to try and improve each week and that has to be our goal.”

Ritchie County, last season’s Class A state champion, fell to 0-3 and failed to record its first victory in a matchup of the two most recent Class A champs.

“You go back next week and just try to improve,” coach Haught said. “You can’t sugarcoat this. We took a step back tonight and we did not play as well as we did last week for whatever reason. We have seven games left and you just work on getting better every day.”