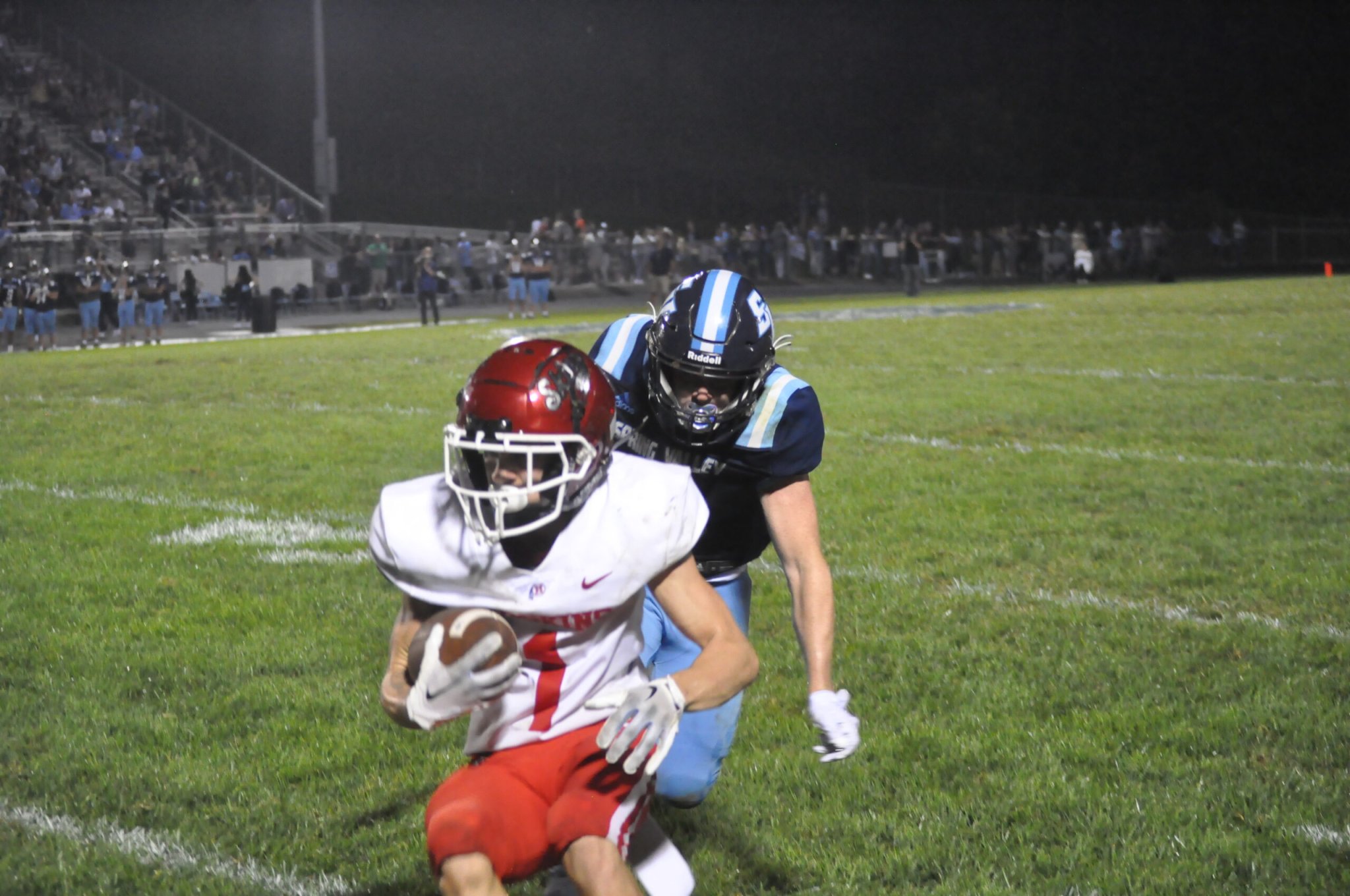 HUNTINGTON, W.Va. — The way Spring Valley coach Brad Dingess saw it, Friday’s matchup between the Class AAA No. 8 Timberwolves and No. 5 Hurricane was something like a throwback boxing match.

“It was like a heavyweight fight where we were just slugging each other,” Dingess said.

Playing on its home field, Spring Valley landed the last blow, and as a result, the Timberwolves remained unbeaten with a 31-28 victory against the Redskins.

“We happened to make a couple more plays than they did at the end,” Dingess said.

Trailing 31-28, Hurricane (3-1) got its defense off the field when the Timberwolves’ Bruin Booth was stopped the distance of a football short on a fourth-and-2 run, enabling the Redskins to take over at their 39-yard line with 4:03 remaining.

A 23-yard pass from Noah Vellaithambi to Bryson Murrell put HHS on the SV 35, and Mondrell Dean’s 10-yard run three plays later allowed the Redskins to enter the red zone.

Before first-and-10 on the 16, Hurricane was whistled for a false start, though it got that yardage back and a little extra when Dean gained 7 yards on a run.

However, a low snap on second-and-8 resulted in a loss of 8 yards that forced third-and-long, and Vellaithambi’s pass to Dean was picked off by Booth, giving the Timberwolves the ball back with 1:23 left.

“We haven’t been put in that situation at all,” Hurricane coach Donnie Mays said. “I told the kids they’d face adversity at some point this year and you have to respond. We did a good job on this last drive of stopping them, but we didn’t finish offensively.”

Booth’s 17-yard run on the ensuing series sealed the verdict.

After struggling defensively early on, Spring Valley blanked Hurricane in the fourth quarter to prevail.

Cody Shy’s 2-yard touchdown run with 10:49 to play allowed the Timberwolves to lead, though a failed point-after try left the advantage at three points.

Spring Valley allowed Hurricane to pick up a pair of first downs on its ensuing series, before Sam Booth’s sack ultimately helped force a punt.

It was a strong ending for a Spring Valley defense that surrendered two touchdowns within the first 1:09 of play.

Vellaithambi’s 72-yard touchdown pass to Tyshawn Dues on the second play from scrimmage left the Redskins with a 7-0 lead, though it was answered 14 seconds later when the Wolves’ Jalyn Abercrombie returned the kickoff 94 yards for a score. A blocked extra point left Hurricane with the 7-6 advantage, and it grew to 14-6 when Jeremiah Riffle outraced the SVHS defense for a 50-yard touchdown, giving the Redskins a pair of touchdowns on four offensive plays to that point.

SVHS answered with a 14 play drive that was capped off by Booth’s 3-yard touchdown run, though Abercrombie was stopped short on the two-point attempt, allowing Hurricane to stay in front, 14-12.

Hurricane’s Lucas Rippetoe recovered a fumble following an issue with a Spring Valley exchange on the opening play of the second quarter, allowing the Redskins to start at the Wolves’ 32.

Following an exchange of punts, SVHS quarterback Dalton Fouch connected with Kyndon Keesee for a 72-yard touchdown pass, allowing the Timberwolves to trail 21-19.

The score stayed that way through the first half, though the Wolves nearly garnered their first lead, but Landon Mosser was unable to make a 37-yard field goal attempt.

Instead, Spring Valley started the second half with a drive that featured seven rushes for 70 yards, keyed by Fouch’s 36-yard dash and finished by Shy’s 4-yard TD plunge. Shy was stopped short on the two-point try and the Wolves settled for a 25-21 lead at the 8:28 mark of the third quarter.

“That’s a really good Hurricane team,” Shy said. “They have really good skill players all around and they’re going to make plays. You just have to conquer it and bounce back. We bounced back.”

Although Keesee intercepted Vellaithambi on the next series, Hurricane forced a three-and-out to get the ball back and got a go-ahead score when Riffle raced 49 yards for a touchdown, which combined with Caleb Johnson’s fourth point-after kick, allowed the Redskins to lead 28-25 with 3:50 left in the third.

Hurricane had only two possessions from that point forward, and ultimately fell short for the first time under Mays, with Booth’s interception preventing the Redskins from gaining a late lead.

“They kind of had us,” Dingess said. “We brought the mike backer [Shy] and left the middle of the field wide open. He jumped it, saw it and made a heck of a play.”

Paced by Riffle’s 187 rushing yards on 21 carries, the Redskins finished with 375 yards.

“We controlled the line of scrimmage up front on offense and we were able to just kind of grind it out,” Dingess said. “We were still able to throw the ball pretty effectively, but we kind of went back to our roots right there.”