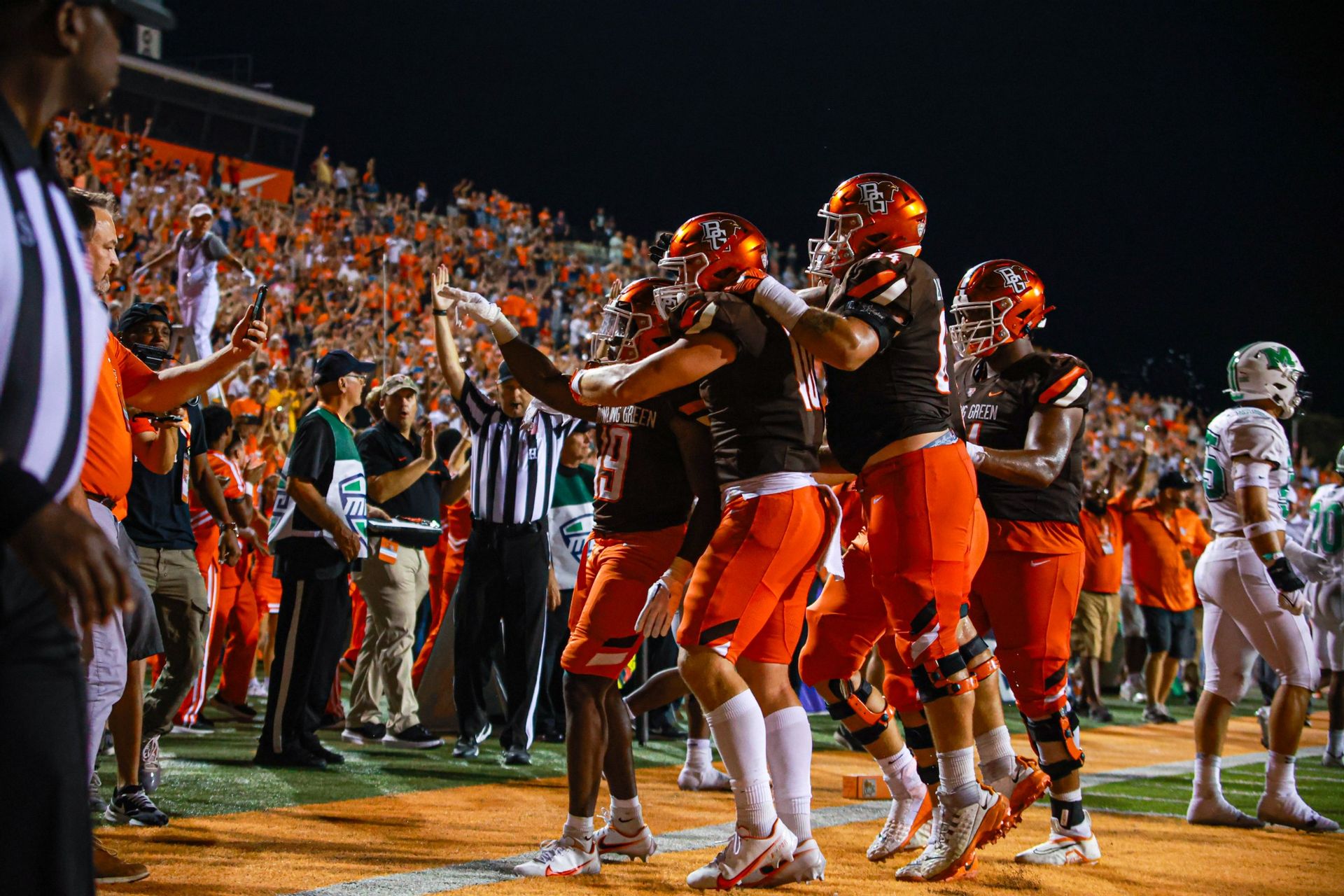 Bowling Green got past Marshall 34-31 in overtime. Photo by Luke Allen/BGSU Athletics

From the Shocker in South Bend a week ago to a Bummer in Bowling Green on Saturday.

Coming off a win at Notre Dame as a 20-point underdog last week, the heavily-favored Thundering Herd jumped to quick 14-0 lead, only to see the Falcons battle back in a big way and pull off their version of a shocker, 34-31 in overtime to continue Marshall’s futility at Doyt L. Perry Stadium in Bowling Green, Ohio.

Marshall is 2-15 all-time in games played on the home turf of the Mid-American Conference member. Bowling Green leads the overall series, 22-8.

Quarterback Matt McDonald, on a play-action fake, connected with Ta’ron Keith in the flat and he dove into the right pylon for the winning 2-yard touchdown pass to make the 100th Homecoming quite memorable. The many fans in the crowd of 21,158 stormed the field to celebrate and erase the pain of last week’s seven-overtime 59-57 loss to Eastern Kentucky at home.

On the opening play from the 25, the Falcons thought they had won when PaSean Wimberly took a jet sweep right and escaped down the sideline, appearing to record a walk-off TD. He got hit and about the 5 and dove into the end zone. But after a review, it was ruled his knee hit at the at the 2.

“We found a way to win, plain and simple. That’s what’s great for the kids. They found a way to win. But there’s some tenacious, no quit in this team, and I’m really proud of them,” Falcons coach Scot Loeffler said.

The Herd got the ball first in OT and Rece Verhoff connected on a 38-yard field goal to put the visitors ahead, 31-28.

“We didn’t do what we needed to do to win today,” Herd coach Charles Huff said on the Herd network’s post-game radio show. “We beat Marshall. Turn the ball over three times and you have a hard time winning. We’ll learn from this. I think this might be the best thing that could happen to this team.”

After the early Marshall burst, the Falcons settled down and charged back to tie the game at the half, 21-21. McDonald, who finished four scoring tosses, had two in the second quarter. Both came on fourth-down calls. The second was a 31-yarder to Cavon Croom off play action with Croom racing downfield wide open and hauling in the pass.

Bowling Green took its first lead when Harold Fannin, Jr. went over from a yard out to make it 28-21 with 13:08 left in the game. On the play, he went in motion left, took the handoff, found a hole and cut inside.

The Herd got back even when Khalan Laborn scored on an 8-yard run with 5:43 to play. Earlier, the former Florida State player who came to Marshall via the transfer portal, twice fumbled the ball away inside the home team’s five. The second came when he caught a pass in the flat, got popped at the Falcons’ 5 by J.B. Brown and the ball ended up sailing out of the end zone for a touchback. Herd quarterback Henry Colombi had a pass picked off.

“We started fast and missed some opportunities to go up a few more points,” Huff said. “It did catch up to us. Everybody has to look at themselves now.”

McDonald, son of former Paul McDonald, who played at Southern Cal and then Cleveland Browns in the NFL, now has 10 TD passes overall, tops in the MAC. He finished 27-of-45. Colombi completed 24-of-35 passes for a season-high 338 yards and two scores. Laborn totaled 157 yards on 24 rushes. Corey Gammage hauled in seven passes for 100 yards with 51 coming on his first catch for a score. He appeared to be down, but pushed up with his hand and come off the back of a Bowling Green player without touching the ground and turned and ran to the end zone with the stunned Falcons just watching.

Marshall racked up 545 total yards to 377 for the Falcons, who are 28-12 all-time against Sun Belt Conference opponents.

Marshall tries to bounce back next Saturday in its Sun Belt opener at Troy. Game time is 7 p.m. NFL Network will air the game.

The Trojans lost Saturday to Appalachian State 32-28 in heartbreaking fashion. Troy led 28-26 with 2 seconds left when Chase Brice lofted a Hail Mary pass to the end zone. The ball didn’t reach the goal line, but it deflected into the arms of Christian Horn at the 7-yard line and he sped into the end zone for a Mountaineers’ win as time expired.