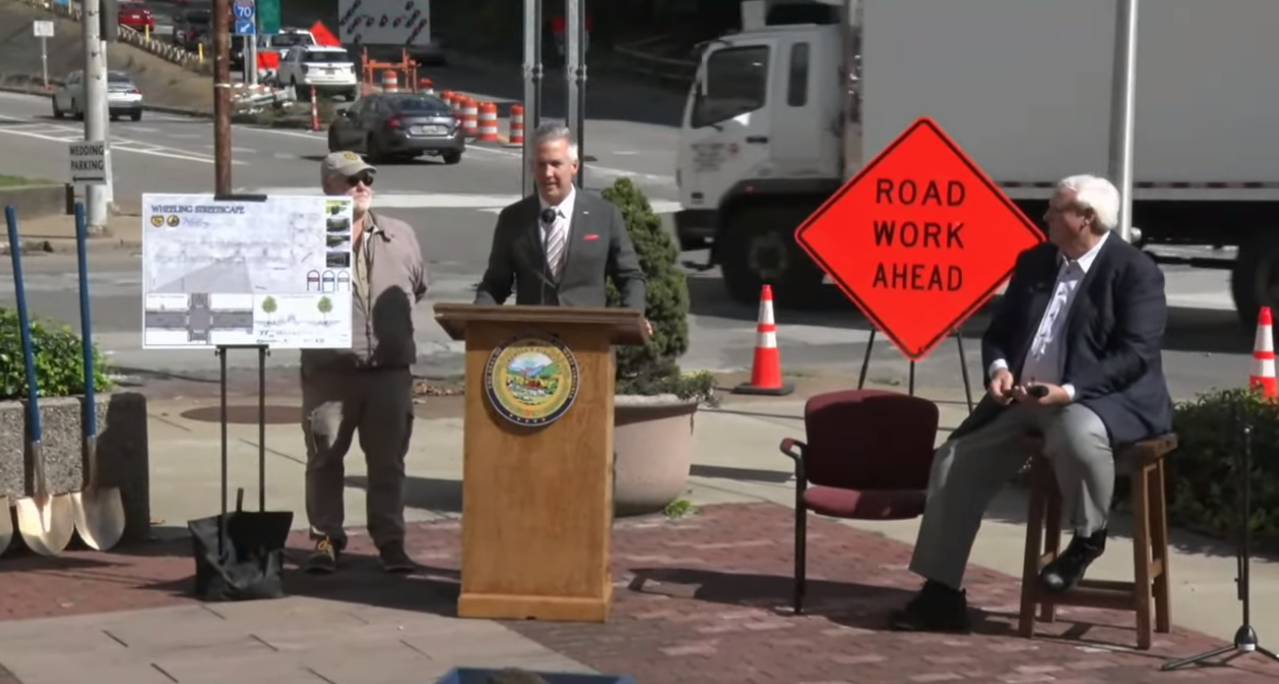 WHEELING, W.Va. — Calling it one of the most exciting things to happen in Wheeling in two decades, Wheeling Mayor Glenn Elliott stood proud and relieved to kick off a long-awaited roads project in downtown on Friday.

Elliott stood alongside Gov. Jim Justice, Secretary of the West Virginia Department of Transportation Jimmy Wriston and other local officials on Market Street for the groundbreaking for the $32 million Wheeling Streetscape Project.

The project is a partnership between the WVDOT and the City of Wheeling that will upgrade West Virginia Route 2 on both Main Street and Market Street in the city. It was first brought to the table in 2016 and Elliott told the crowd it’s finally coming to fruition because of its complexity.

“It’s grown in scope, it’s grown in complexity for reasons having to do with the design of the streets and the way they lay right now. When it’s done, it’s going to be the most pedestrian-friendly downtown in the state, I am convinced of that,” Elliott said.

Elliott previously told MetroNews he and Wheeling City Manager Robert Herron met with Justice in 2021 in Charleston to finalize the plans of the project. He said there were many hurdles including the redesign of the sidewalks. Elliott said most sidewalks in downtown Wheeling have underground vaults that were used to load coal into basements but most are not in use anymore.

The mayor also said that the last time the sidewalks were refurbished in downtown was 1980, before the Americans with Disabilities Act (ADA) of 1990. He said Wheeling’s current sidewalks offered a graded slope more than the requirement.

The City of Wheeling is contributing $1.9 million for construction work on the project and $100,000 toward design and engineering. Additionally, the West Virginia Department of Transportation (WVDOT) has also been awarded a $16.25 million federal RAISE grant for the project.

Justice said every penny towards the project is well worth it and the citizens of Wheeling deserve this.

“For God’s sake of living, this has been needed for way too long. This has had all kinds of issues and problems but it took a lot of expertise way above my paygrade to pull off,” the governor said.

He added, “From the first day that I drove in here I thought if we don’t get this fix who in the world would want to come to the town of Wheeling? It was a shame.”

Elliott also told MetroNews it’s no secret the conditions of the roads itself through downtown are not up to par. In 2016, the DOH was approached by city officials urging a repaving project and the potential to modify it into a streetscape project. Main Street in Wheeling is part of State Route 2 so Elliott said the city could not perform its own maintenance on the road.

Traffic interruptions are expected to be at a minimum with the project.

Construction, done by Triton Construction Inc. with a low bid of $31.9 million, is expected to be completed in 2024.