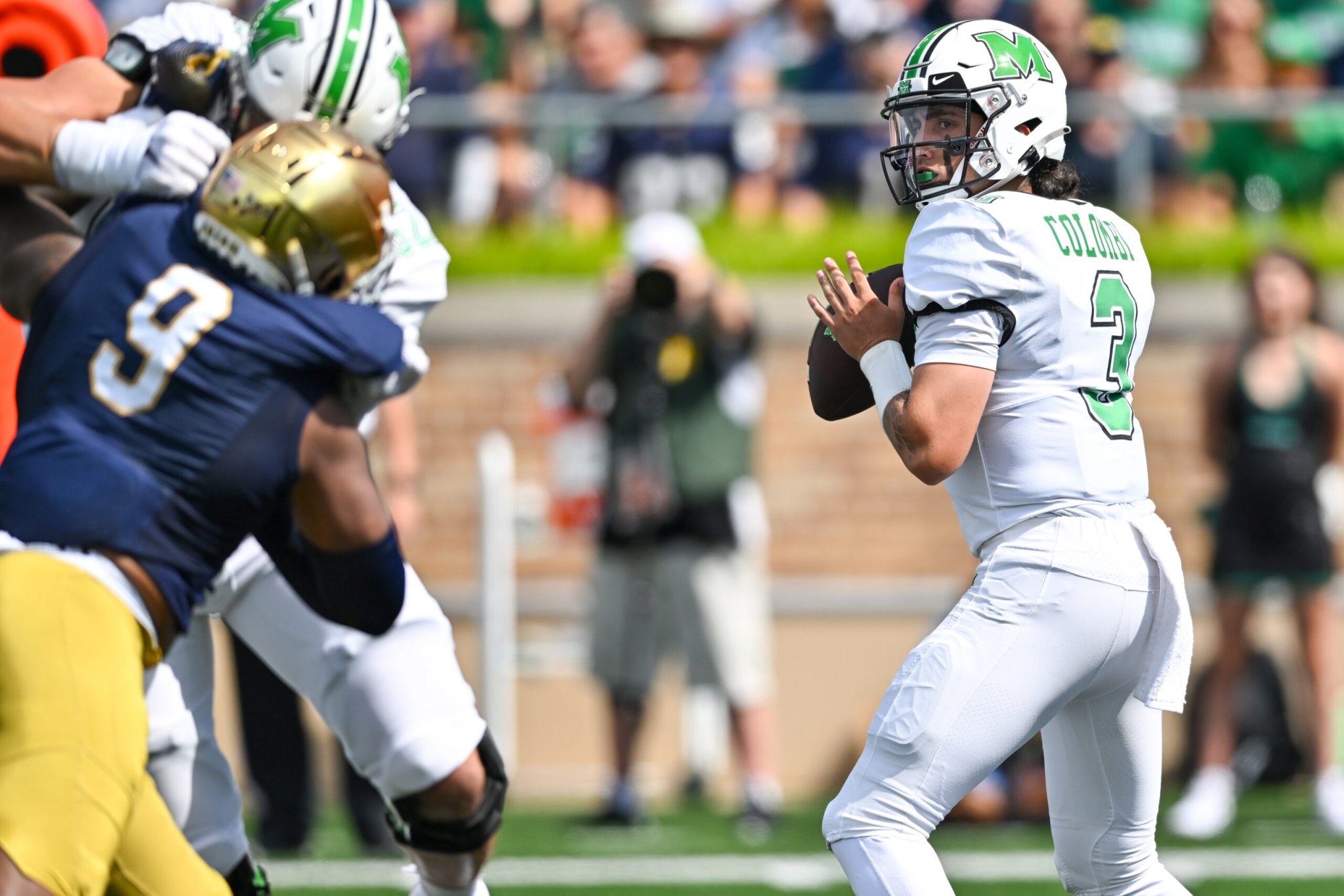 Marshall’s welcoming to the Sun Belt Conference takes place Saturday when the Herd play at Troy in a 7 p.m. contest that will be carried by the NFL Network.

Marshall (2-1) is hoping to rebound from last week’s 34-31 overtime loss at Bowling Green in the matchup with the Trojans at Troy’s Veterans Memorial Stadium.

The teams have met five times in the past, though four of the games were played in Huntington. Marshall has a 3-2 series advantage.

Troy is coached by Jon Sumrall, who is in his first season. Sumrall was hired off of the Kentucky coaching staff, where he worked the last two seasons as the Wildcats’ co-defensive coordinator. Sumrall previously worked as an assistant under former Trojans and current WVU head coach Neal Brown.

A second-quarter interception thrown by Herd quarterback Henry Colombi was sandwiched by lost fumbles in the first and third quarter from running back Khalan Laborn, and all three occurred in Bowling Green territory.

Laborn’s fumbles were especially costly, as both occurred inside the red zone. Marshall’s five turnovers in three games aren’t especially high, but the timeliness of the miscues last week were troubling.

This week, Marshall faces a Troy team with even worse turnover numbers — two lost fumbles and four passes intercepted. Marshall needs to hang onto the ball and use its aggressive defense to force the Trojans into more miscues.

McDonald found ways to get the Falcons into the right plays in conversion situations, be it with a clutch run or crossing routes, which the Herd defense found hard to cover throughout the day.

Marshall faces an even better passing game this week in Troy, which features four receivers with more than 100 yards to this point. Jabre Barber and Deshon Stoudemire each have 16 catches to go with a combined 364 yards and two touchdowns.

Troy quarterback Gunnar Watson is only 72 yards away from 1,000 passing yards on the season as he’s averaged better than 309 yards a game. He’s thrown five touchdown passes and is completing 68 percent of his passes.

Former WVU quarterback Jarret Doege is the backup and has 124 passing yards and a touchdown in limited playing time.

Marshall’s defense was disappointed with its performance against Bowling Green, and hopes to be ready for the challenge at Troy.

“We had a different message from the players after the loss as leaders spoke up,” Huff said. “The culture is different and a lot of guys on the team owned the poor performance, and they know that they need to be a lot more focused.”

STAY SOUND IN COVERAGE: Balance is certainly not the word to describe Troy’s offense. The Trojans have run 86 times for a mere 175 yards, while throwing 129 times for 1,052 yards.

Troy’s offense is going to put plenty of pressure on Marshall’s defense, and is the best pass attack the Herd has seen so far this season.

Marshall must find ways to put pressure on Watson, while limiting his ability scramble and not losing track in coverage after the Falcons had several instances with free-running wideouts a week ago.

With Troy’s defense surrendering 415 yards a game and 5.6 yards per play, Marshall’s offense figures to have a chance to move the ball and produce points. It will be up to MU’s defense to ensure the Herd gets back on track.