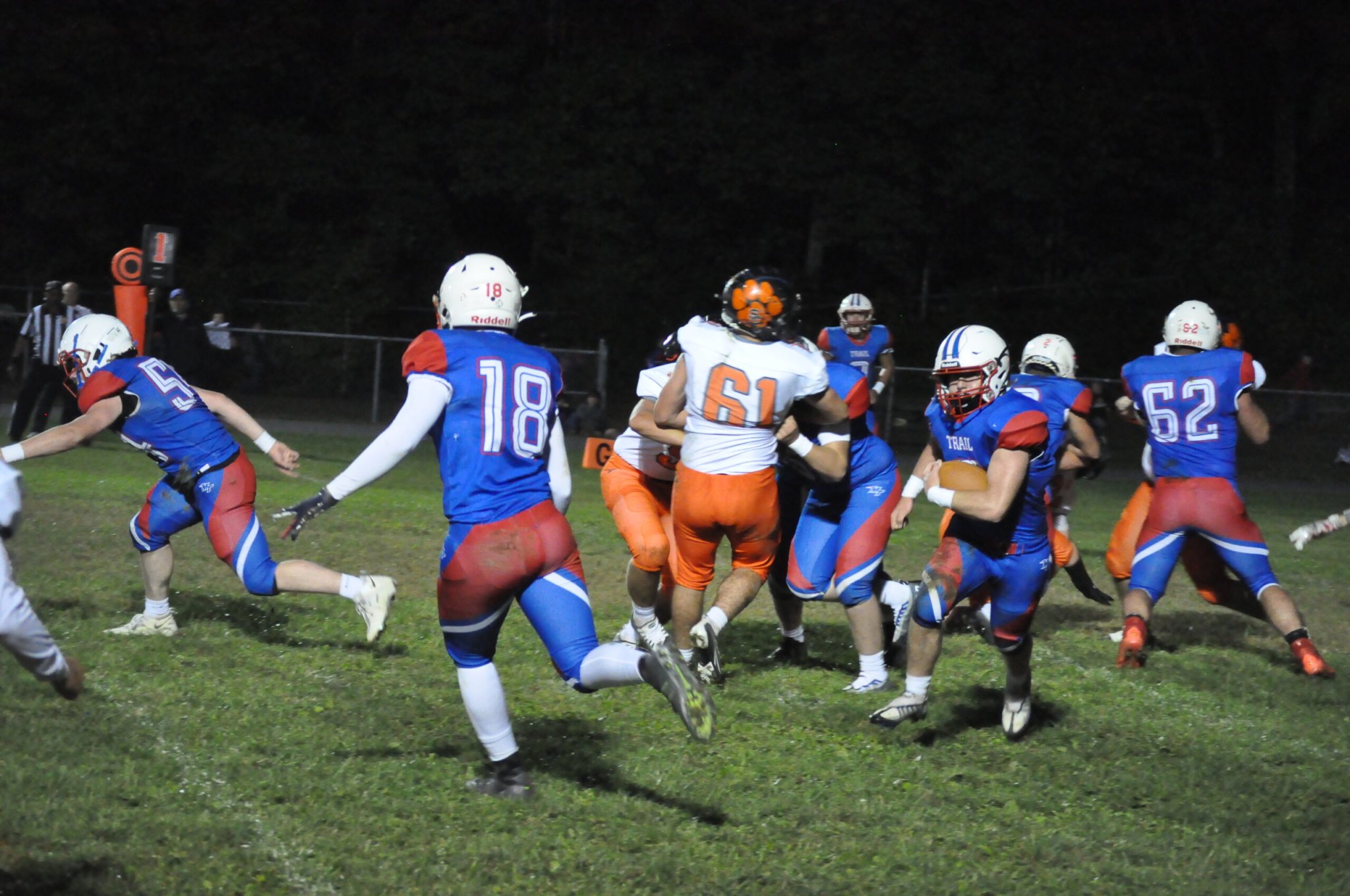 For one half, Moore’s team didn’t prove much as it struggled to stop the Bobcats’ ground game and couldn’t maintain consistent offensive play while falling behind 12-0.

But Midland Trail did just enough to hang around, and then made big strides on both sides of the ball in the second half to rally for a thrilling 13-12 victory on a chilly Friday evening.

“The teams we’d beaten to this point haven’t won a ton of games, so we knew if we want to make a playoff push, we had to win this game,” Moore said. “Maybe that’s my fault for putting too much pressure on them, but I’m blatantly honest with these kids. They’re going to know where they stand in the grand scheme of things.”

The Patriots’ winning score came with 8:51 remaining when quarterback Jaden Gladwell connected with Cody Harrell on a fourth-and-goal slant pass from the 1-yard line. On the previous three plays, each of which were runs, Midland Trail (4-1) mustered only 1 yard. Moore elected for his team to pass, and Gladwell wisely found his top target for the go-ahead score.

“We had success moving the ball, and I knew their linebackers were very aggressive, and we knew there’d be more windows there than trying to chuck the ball down the field,” Moore said. “We knew those underneath and intermediate routes would be there and we were trying to exploit that.”

After a failed two-point pass, Trail was left with a one-point lead and needed another defensive stop to stay in front.

On the ensuing series, Summers County (2-3) got to midfield courtesy of a Patriots’ personal foul penalty, but faced with fourth-and-12 soon after, they elected to punt with 6:33 remaining.

Harrrell’s 45-yard punt return allowed the Patriots to start at the Bobcats’ 40, and they gained a pair of first downs soon after to move into the red zone. However, the Bobcats came up with a fourth down stop to regain possession at their 13 with 1:47 remaining.

SCHS was unable to move the ball as a Landon Syner sack of Ryan Oliveros results in a 10-yard loss on the second play. Faced with fourth-and-21, Oliveros hit Kaden Nephew on a pass play, but it went for only 9 yards, sealing the outcome with 28 seconds remaining.

“We got satisfied,” Bobcats’ head coach Josh Evans said. “That’s all there is to it. We’re close, but we’re just not there yet. We have three seniors on the field right now. I know he has a bunch of young kids, but we’re trying to get over the hump. We’ll eventually get there. We have to learn how to finish. We had our foot on the gas and we have to learn how to finish.”

Trailing 12-0, MTHS put together its first scoring drive on its second series of the third quarter. The Patriots began at the Bobcats’ 37 and benefitted from an unsportsmanlike conduct penalty before Gladwell tossed a 20-yard touchdown pass to Syner, who made a strong individual effort to provide Trail with its first points.

Soon after, Summers’ Tyson Adkins lost a fumble that Trail’s Cade Ooten recovered just past midfield, giving the Patriots the ball back at their 47 at the 2:38 mark of the third.

Trail needed 15 plays to cover the necessary 53 yards, converting a fourth-and-1 on Gladwell’s 9-yard pass to Harrell, and then getting a bounce in its favor when Gladwell’s pass hit off Harrell and fell into the hands of Zane Burford for a 28-yard gain on third-and-27.

The TD pass to Harrell came six plays later and proved to be enough for the Patriots to overcome a forgetful first half.

“He is a ridiculous athlete,” Moore said of Harrell, “and any college would be lucky to have him.”

Drake Cole’s 55-yard run on the second play from scrimmage was immediately followed by Willie Dodson’s 28-yard touchdown run that allowed the visitors to lead 6-0 52 seconds into the contest. The point-after try was no good, keeping Trail’s deficit at six.

Although Gladwell lost a fumble on the Patriots’ third play that Cruz Testerman recovered to set up Summers at the Trail 8 on its second possession, the Patriots bogged down and came up with a stop on fourth-and-goal at the 3.

“When we have opportunities, we have to score,” Evans said. “That’s the difference.”

Summers, however, made the most of its third possession when 10 consecutive running plays netted 55 yards, the last of which was Coen McClaugherty’s 1-yard plunge into the end zone with 43 seconds left in the first quarter. Summers elected to go for two, but McClaugherty was stopped short on a run, keeping the Bobcats’ lead at 12-0.

“We had nine on the offensive line and that’s hard to stop. We’ve been working on it a few weeks and we thought we could move the ball pretty well on them,” Evans said. “We did in the first half, but we didn’t make of our opportunities.”

Dodson lost a fumble inside Trail’s 30 that the Patriots’ TC Perry recovered in the second quarter. There were three additional second-quarter turnovers, though none that led to points, with Oliveros first intercepting Gladwell, before the Bobcats’ quarterback returned the favor when he was picked by Harrell.

Caden Rhodes also intercepted a Gladwell pass with 14 seconds to play in the opening half, marking the Patriots’ third turnover, compared to the Bobcats’ two, over the first two quarters.

“We didn’t have any energy or do the things we normally do. I don’t know if we were trying too hard or what,” Moore said of the opening half. “I put a lot of pressure on this game and wanted to beat Josh. He’s a good friend of mine and this is one of those games you circle just for personal reasons. That might’ve been on me, but I’m very proud of how resilient they were. Like I told them, ‘an ugly win is better than a pretty loss.’ We can’t turn the ball over that many times and expect to win, but I’m very proud of them.”