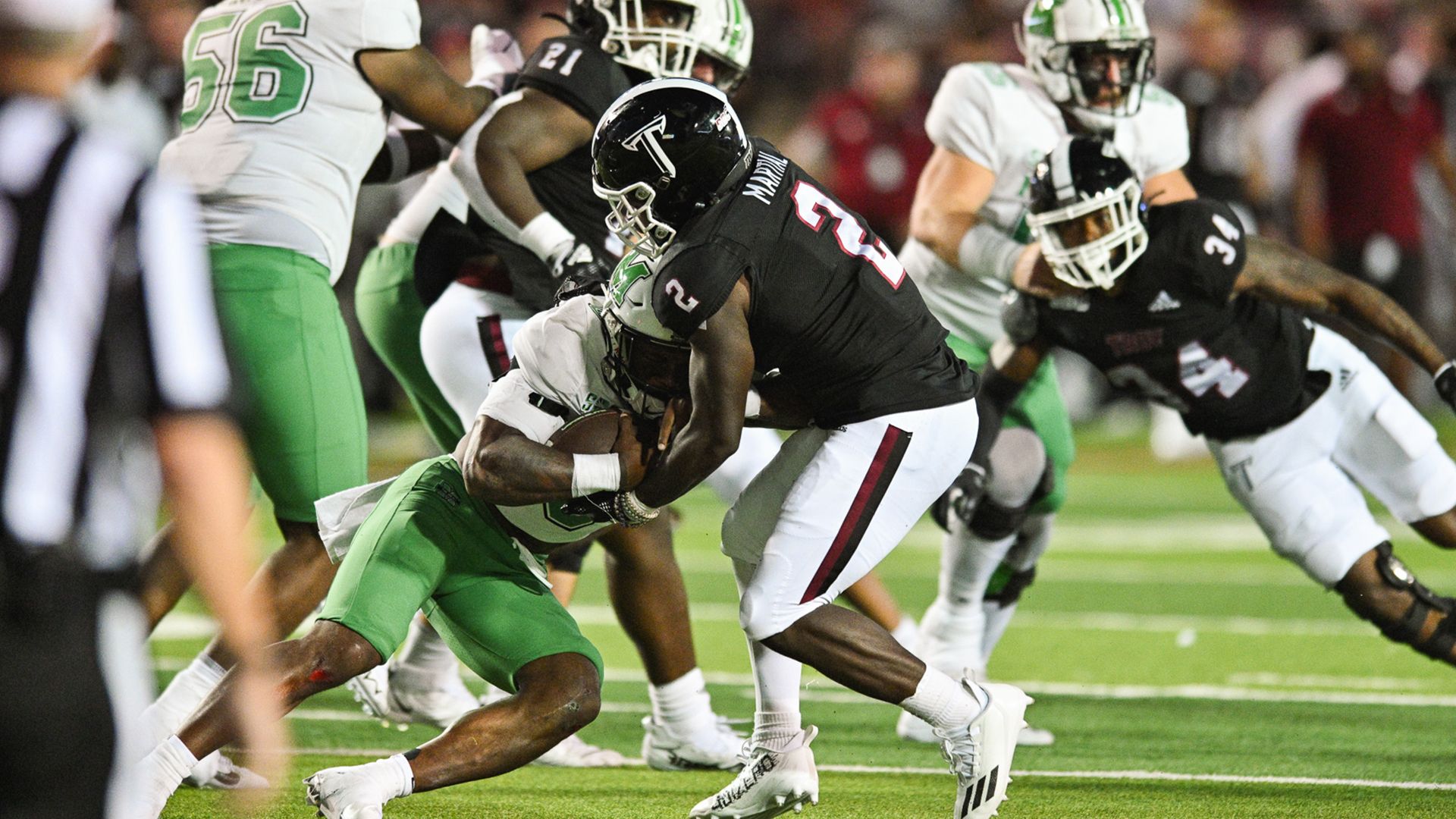 Marshall struggled to muster offense in a 16-7 loss at Troy. Photo courtesy of Troy Athletics

Troy’s defense put the clamps on Marshall’s attack and even got into the scoring act.

Not to be outdone, the Trojans got a big game from their quarterback, two receivers and kicker and spoiled the Thundering Herd’s debut in the Sun Belt Conference with a 16-7 win Saturday night in front of 27,514 fans in Veterans Memorial Stadium in Troy, Ala., and the viewers who watched the NFL Network’s live telecast.

Marshall coach Charles Huff knows his team has to find its offense as soon as possible. The Herd didn’t muster more than 100 yards passing or rushing and the home team had a decisive edge in total offense, 418-169. Marshall entered with the nation’s sixth-ranked rushing offense at 263.3 per game.

“We battled on defense,” said Huff, aware a third-quarter pick by Micah Abraham created the Herd’s only TD, a 14-yard run by Khalan Laborn. “On offense, we’re spinning our wheels in the mud. Partially, it’s because how Troy played. We have things we have to fix. It’s costing us opportunities.”

Troy’s Gunnar Watson threw for 321 yards to go over 5,000 for his career. Tez Johnson and Jabre Barber both had over 100 yards receiving with each setting up fourth-quarter field goals with big gains after receptions.

Jones’ touchdown came after T.J. Jackson strip-sacked Henry Colombi for a 7-0 lead and Buce added a field goal in the first quarter which came on a drive that included a 63-yard Johnson reception, 51 yards coming after the catch.

And Troy’s special teams got into the act with a blocked field goal just before halftime.

“We got into this together; we’ll get out together,” Huff said. “We’ve got to move the ball on offense to help the defense out. Laborn did run, but it’s like you’re one dimensional. We’ve got to complete passes.”

Marshall (2-2, 0-1 Sun Belt) hopes to iron out the shortcomings by this Saturday when Gardner-Webb visits Joan C. Edwards Stadium at 3:30 p.m. It’s the Herd’s first home game after a 1-2 road trip.

The overall series with Troy is now tied at 3-3 as the Trojans have won three in a row. Before Saturday, the last meeting was in 2004. Marshall is 30-31 all-time against current Sun Belt opponents.

Troy obviously bounced back after last week’s stunning loss at Appalachian State when the Mountaineers scored on a 53-yard Hail Mary pass on the last play of the game.

“I think we came back after the heartbreak of last week and competed,” Trojans coach Jon Sumrall said. “We would also like to thank our fans for showing up tonight.”

The scoop and score by Jones was Troy’s first fumble return for a TD since 2020 at Arkansas State.

Martial became the all-time Sun Belt tackle lead with his third stop of the game.

“I give all the credit to my coaches and my defense line,” Martial said. “Those guys are awesome, and I could go on talking about the work they put in. We’re just 11 guys playing the game with incredible detail, and those are the results.”

The crowd size was the fourth-largest at The Vet.