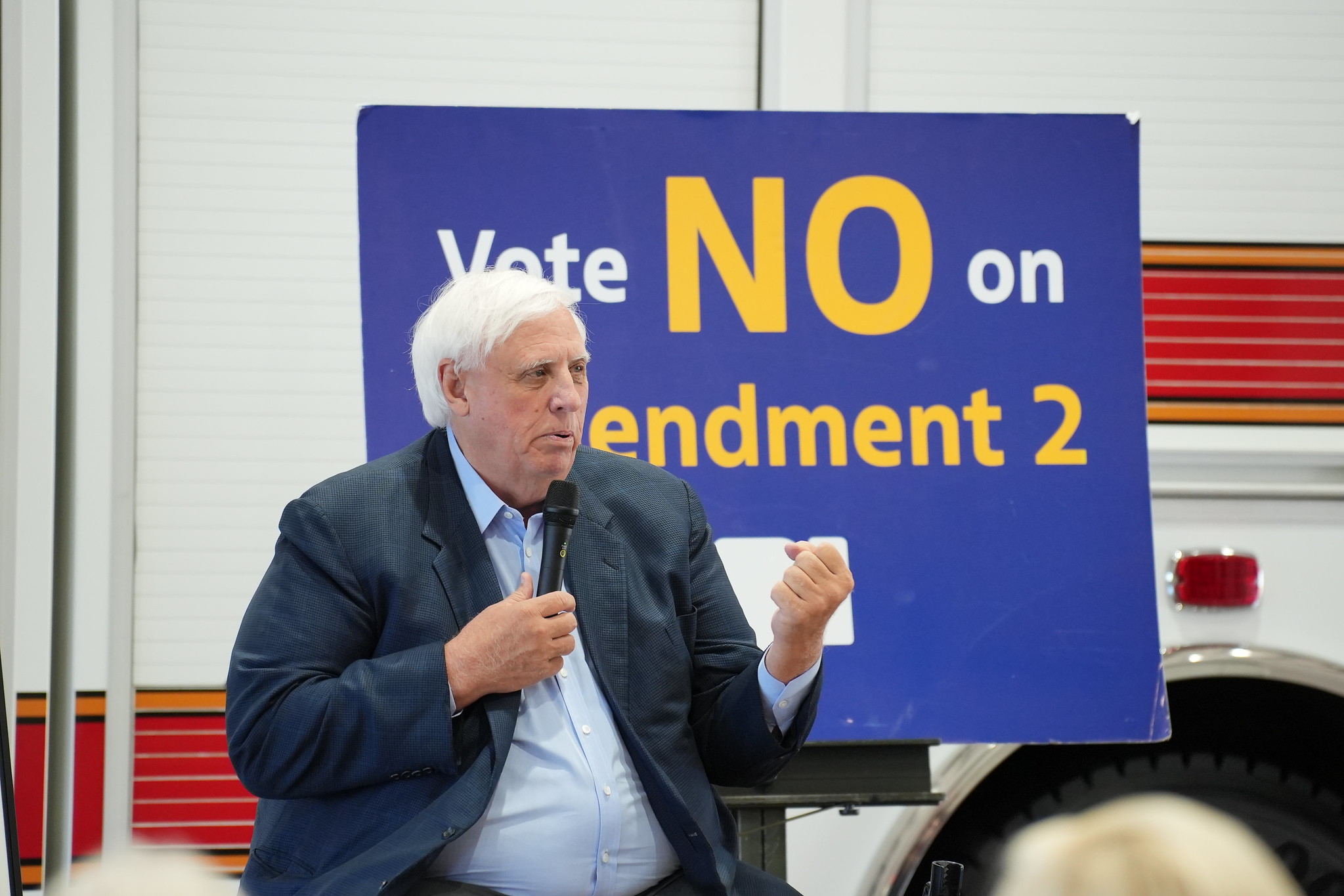 Gov. Jim Justice appears at an event to campaign against Amendment Two.

West Virginia voters hoping to be relieved of personal property tax payments on their vehicles have a couple of options, neither of them certain.

One is to vote in favor of Amendment Two, which would give legislators constitutional authority to change personal property taxes, including the annual ones on vehicles. There is no guarantee that lawmakers would take that second step, but legislative leaders have described it as a priority.

The second option is to count on the governor, although his path toward car tax relief isn’t yet clear.

Gov. Jim Justice has said he would support elimination of the tax, even as he has barnstormed the state in a campaign against the amendment that would allow it to happen. The governor has also been thinking about another possibility, a rebate, but that’s not concrete either.

“Am I for getting rid of the car tax? Absolutely,” Justice said in a Thursday briefing in response to a MetroNews question. But he went on to suggest, as he regularly does, that relief from the tax is being used as an incentive to vote for Amendment Two, which he opposes because it also could open up property tax cuts for businesses and affect finances of local governments.

So Justice described working on an alternative, but he said it’s not ready.

“We may move forward on this, and we may find we can’t do it,” he said. “From the standpoint of just arbitrarily saying, let’s just get rid of the car tax — we can’t really do that. We do need a vote, I guess, to be able to remedy that.

The West Virginia Association of Counties, which has opposed Amendment Two, put out a statement today in support of the governor’s possible rebate on vehicle taxes.

“The counties strongly support giving taxpayers their dollars back as soon as possible,” stated Matt president of the association. Harvey, the Jefferson County prosecutor, went on to say the association does support tax breaks — “especially in these times of large budget surpluses. But it needs to be done in a sustainable manner that ensures stability of our vital local services when times get tough.”

The Association of Counties has opposed Amendment Two because local governments derive such significant financial support from property taxes. The county leaders contend the amendment creates too much uncertainty about how to sustain schools, libraries, emergency services and more.

West Virginia Senate leaders, in particular, have tried to counter that by saying they’re ready to provide more funding to counties than they’re already receiving from the property taxes. The Senate leaders want the property tax amendment to pass so they can move on a bill to cut taxes on vehicles and on what businesses pay for their equipment, machinery and inventory.

Senate Finance Chairman Eric Tarr, R-Putnam, has objected to the way the governor has approached the car tax issue.

Senate President Craig Blair, R-Berkeley, recently put out a statement poking fun at the governor’s support for a tax cut on vehicles and his simultaneous opposition to the amendment that would allow it.

At the time, Justice had said: “Now from the standpoint of getting rid of the car tax, I would a million to one be in favor of that if there’s a mechanism to be able to move into the legislative session that’s coming up and get rid of that, I am a thousand percent behind that.”

Blair said there is a mechanism — the constitutional amendment.