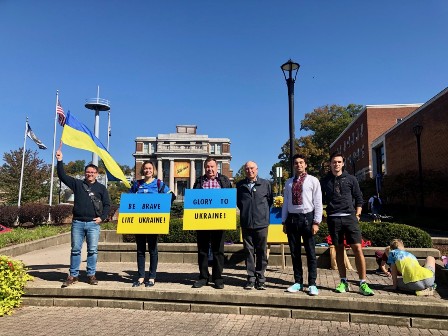 MORGANTOWN, W.Va. – Members of the Ukrainian community rallied Friday on WVU’s downtown campus in support of their country as the war with Russia rages on.

WVU Associate Professor of Health Sciences Sergiy Yakovenko said they are supporting the civilian and military members fighting for their lives.

“There are many people, young and old fighting on the front line in Ukraine,” Yakovenko said. “Protecting the values we hold dear like democracy and freedom.”

Yakovenko said with the help of munitions from the west the Russians have been squeezed out of some recently annexed territory but those gains have been met with a new level of brutality.

“Their successes on the battlefield are unfortunately met with attacks on civilian population in Ukraine,” Yakovenko said. “Our main goal is to defend civilians and a peaceful life.”

These events keep the war top of mind and generate awareness generally, but for the Ukrainian community it’s important to support each other as well as those in the battle area.

“Our support is imperative for Ukrainians,” Yakovenko said. “Truth be told, Russia has destroyed most of the infrastructure in Ukraine and without our help they will not be able to stand the line.”

Yakovenko said he is not hopeful there will be an acceptable negotiated end to the war. He believes Putin will continue the fight despite unrest at home.

“You cannot negotiate with somebody who wants to kill you and you just want to survive,” Yakovenko said. “There is just no negotiation possible.”