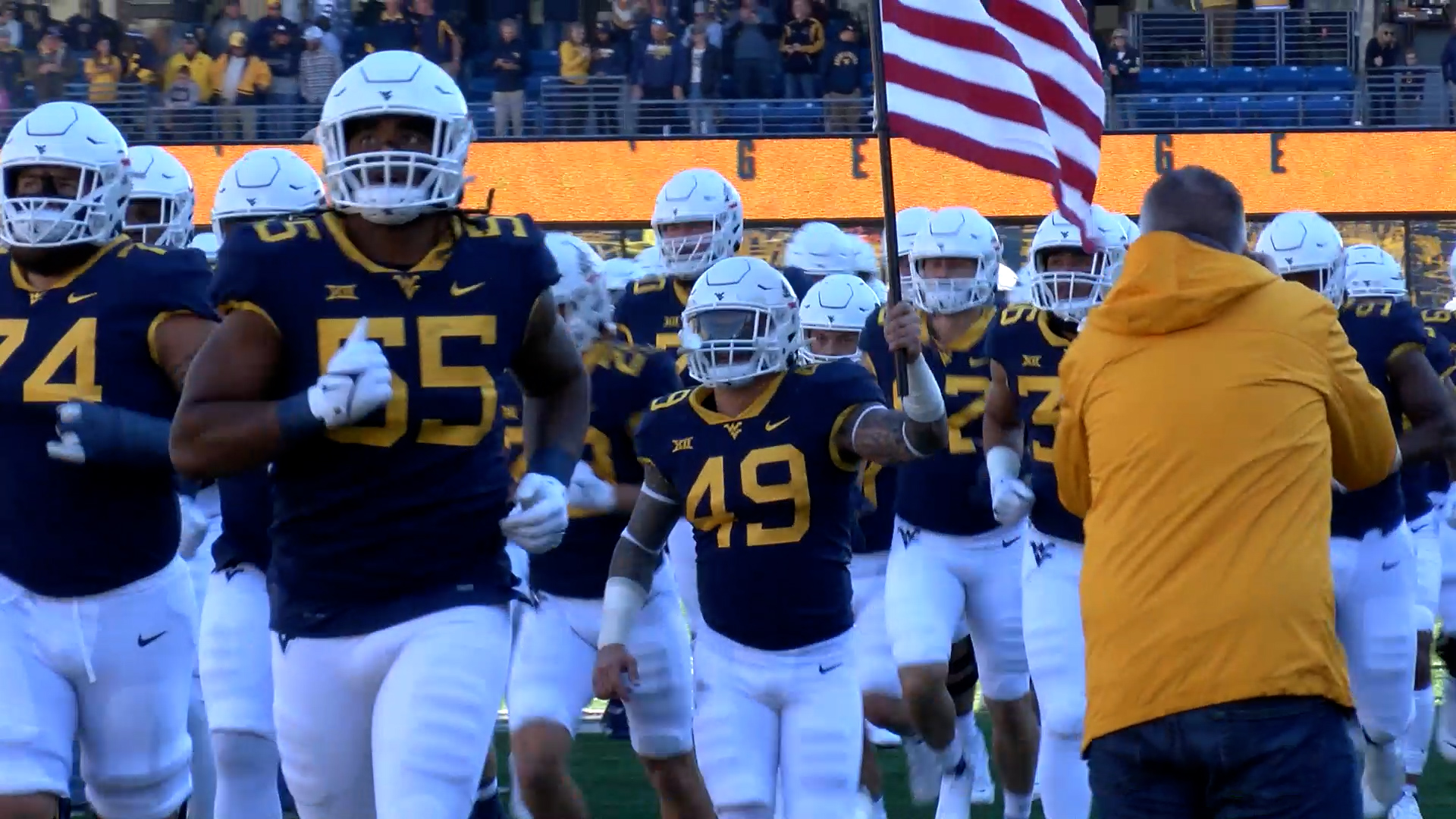 MORGANTOWN, W.Va. — Over a hundred players make up the WVU football roster and all have a unique story about how their football journeys began and how they arrived in Morgantown. Wil Schoonover’s path to realizing a life-long dream had twists and turns. But a year ago, he successfully reached his destination.

Schoonover graduated from Moorefield High School in 2016. He was a decorated three-sport standout in football, wrestling and baseball. Schoonover excelled as a running back and a linebacker. He amassed over five thousand yards from scrimmage in his career with the Yellow Jackets. Schoonover’s teams won four playoff games from 2013 to 2015, falling to eventual state champion Magnolia in the semifinals in his senior season.

He enrolled at Glenville State for the fall semester of 2016 and joined the Pioneer football program. When an NCAA Clearinghouse issue arose from a class during his sophomore year at MHS, Schoonover was ruled ineligible to play that semester.

Looking at other options to help pay for his education, Schoonover returned home and later enrolled in the United States Army.

“I wanted to serve my country. I was very patriotic all growing up. I left Glenville mid-December and I was flying to Fort Benning [in Georgia] in February, on Valentine’s Day. My mom was not very happy on that,” Schoonover said.

“I grew up real fast, especially when you have six-to-eight drill sergeants yelling at you. That was a big learning experience. The structure and organization in the United States Army molded me into the guy I am today. It gave me a big perspective on life, how to lead people and how to treat people.”

Following basic training, Schoonover served in the role of Specialist in the 4/25 Brigade 3-509th Airborne Infantry in Afghanistan. They were also known as ‘3 Geronimo’ – Charlie Company 3-509th as part of a reconnaissance and sniper platoon. Schoonover served overseas until May of 2018.

Schoonover’s military service ended in June of 2020 and he returned home to Moorefield.

“I worked for the Region VII workforce. I was supervisor of a youth development group. I had kids from 14-to-24 years old. Some of them were good kids who were looking for a good working environment. Some of them were not as good and maybe didn’t go to school or had a bad home life or had drug issues. I got to teach these kids career skills.

“We would go to rivers or wildlife areas and pick up trash. I would give them PowerPoint presentations on how to save money and the difference between what you want and what you need. I really take pride in that now. They probably learned a lot from me but I really learned a lot about myself from teaching these kids as their role model.”

While adjusting back to civilian life, Schoonover took steps towards enrolling at WVU with the hopes of walking on to the football team. He needed to complete some coursework and did so at Potomac State. Schoonover joined the baseball team at PSC. He batted .350 in 12 games.

“I played behind [Morgantown High School graduate] Caleb Taylor. The dude was a hell of a catcher. He was a really good guy. I would catch the second game [of doubleheaders]. And we were good.”

With his academic requirements met, Schoonover enrolled at WVU for the 2021 fall semester and he joined the football team on the first day of classes. Schoonover credits former WVU linebacker and Moorefield native Reed Williams for getting him back into football shape prior to joining the Mountaineers.

“He’s a great dude and a great role model. He has been like a big brother to me, a lot of mentoring and a lot of talks outside of football.

“I probably couldn’t have done this without him.”

Schoonover did not see game action in 2021 but worked his way back into football shape throughout the course of the year.

“I would say a full year under Mike Joseph. He’s the best strength coach I know of and a great guy. When I got back, I thought that I was ready just working out on my own. That was kind of hard to always stay ready and not have to get ready.”

Schoonover broke into the lineup this year on special teams and he has been on the travel roster. He also serves as the defensive signal caller.

“It is me and Lee Kpogba, usually. I’ll hear it through the mic through Coach [Jordan] Lesley and then I give them the signal.

“This past week, I actually got to play on kickoff return. I am more of a utility guy on all special teams.”

Schoonover says that while skill sets necessary for success in football and the armed forces are similar, there are differences as well.

“There’s a lot of long-distance in the army. How far can you go and how much can you carry, especially as a grunt? You are carrying a lot of food, water and the basics, radios, batteries.

“Here it is a sprint. A play lasts usually about eight seconds. It is a lot of power here in this world.”

Schoonover will complete studies towards a degree in coaching and performance science this year.

“I plan on interning under Mike Joseph and the strength and conditioning staff downstairs and then work for the Department of Defense either at Fort Bragg or Fort Campbell training military personnel. It doesn’t matter what branch. I kind of want to give back. I love working out. I love the sport science side of it. What can you do to the human body? How far can you push them? For those guys, there’s always room for improvement in athletics or military.”

During last year’s Military Appreciation Day ceremonies at WVU, Schoonover carried the Stars and Stripes into Milan Puskar Stadium. While a return to football after a five-year absence remained a goal, Schoonover says no other destination would have fit except for West Virginia.

“It was a dream come true and it kind of felt like a relief of finally getting to live a childhood dream. I was working hard to get to this point and it finally all came together.”