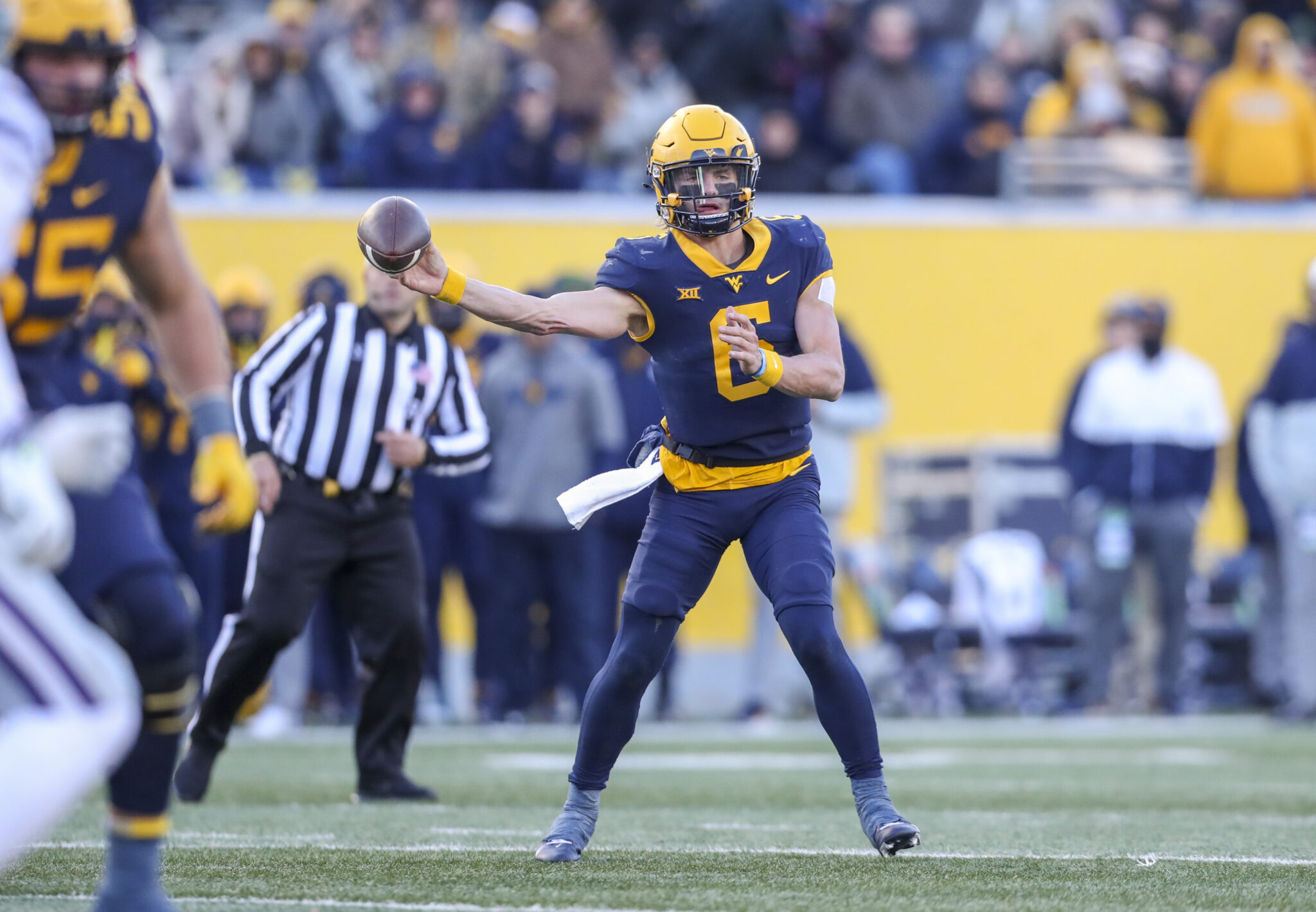 MORGANTOWN, W.Va. — On his third play of his first career start, West Virginia quarterback Garrett Greene threw a pass in the direction of wideout Sam James on third-and-8.

The first pass in Greene’s first start couldn’t have produced a worse result. Greene’s ill-advised throw was intercepted by Kansas State’s Cincere Mason, who returned the pick 37 yards for a score to put the Wildcats up 14-0 in a game they went on to win 48-31.

“The first one was a poor decision,” WVU offensive coordinator Graham Harrell said of Greene’s two interceptions. “It’s man coverage and the guy is underneath the route and he threw it straight to him. That was just a bad read.”

Greene responded by leading West Virginia on an eight play, 75-yard touchdown drive in which he threw to Cortez Braham for 15 yards on fourth-and-4 and James for a 26-yard touchdown on successive plays.

The opening two series provided somewhat of a strong synopsis of what Greene’s first start was like in that his talent, potential, decision-making and inexperience all played a part in a 15 of 27 performance with 204 yards, three touchdowns and the two turnovers.

“You have to be disciplined over and over and over,” Harrell said. “You can’t get bored with doing your job. That’s for anyone and Garrett probably more than most, because his natural personality is to kind of go rogue on you. You can’t get bored taking the easy things. There were some easy things out there we could’ve taken and didn’t. But at the same time, he made some plays scrambling around and he brings the athleticism element. He ran around and made a couple plays.“

Greene displayed his arm talent late in the first quarter when he hit James for a 71-yard scoring strike on a pass he completed with two defensive backs nearby.

“He threw a vertical route to Sam versus one high, which I promise you that’s not what we teach,” WVU head coach Neal Brown said. “But it was a phenomenal throw and it went for 70 yards.”

Brown felt Greene had thoughts of pulling it off again later in the game and noted that as a result, he missed out on a completion to wideout Bryce Ford-Wheaton that could’ve prevented a costly three-and-out on the Mountaineers’ final first-half series.

“We called a similar play and he’s just assuming he’s going to get that same look. Well they leave Bryce uncovered and he doesn’t throw it to Bryce,” Brown said.
“Some of it is, as coaches, Graham and I have to be comfortable with a little bit of unknown. There’s going to be a little bit of unknown and some times where he makes some really good plays and there’s going to be some where he makes some bad decisions. What we have to do is continue to coach him where he has fewer and fewer bad decisions.”

Greene’s second interception came on his first pass of the fourth quarter when Julius Brents picked off a pass that directly led to a K-State touchdown pass and 48-25 Wildcats’ lead.

“The second one was a good decision. We had what we wanted and had the guy open and he just missed the throw,” Harrell said.

Both costly mistakes, but also teaching points. There’s no better tool than experience, which Greene will get more of Saturday at Oklahoma State when he makes his second straight start in the season finale.

The expectation is for improvement from the 5-foot-11, 200-pound sophomore.

“The biggest learning point for him is every play is not going to be a 70-yard touchdown or a 40-yard run,” Brown said. “It’s OK to throw the hitch and let Bryce get 15 or 12. Those are good plays. You stack those and you have a chance to go score touchdowns. Sometimes it’s better just to throw the ball away or dive. You’re going to lose those battles versus linebackers in our league. You’re not going to run them over very often. It’s like I tell my 14-year-old daughter, ‘Some lessons are hard.’”

Greene’s mobility is unquestionably one of his best assets and provides a different element to West Virginia’s offense than when JT Daniels started at quarterback and operated mostly from within the pocket over the first 10 games.

Still, the Wildcats held Greene in check with 17 rushing yards on 12 attempts, though that factors in a loss of 23 yards on three sacks.

“With Garrett, the hardest part is you don’t know when the good things are going to come off the scramble or whatever the case may be,” Harrell said. “College football in general, a lot of times some of the best plays come when it’s not just how you draw it up and things move around and you make a play. The hard part in coaching is you can’t game plan that and you don’t know when that’s coming, but there is some advantage to being able to move around and make plays. He does a good job of that. He has to be disciplined enough to take the easy stuff, too.”

Now Greene prepares for his first start away from home against Oklahoma State, which has beaten the Mountaineers seven straight seasons and eight of 10 since West Virginia joined the Big 12.

Bowl eligibility is no longer at stake for West Virginia, but the opportunity for Greene to end the season on a positive note is.

“At this point in the season, it obviously hasn’t gone the way we wanted it to, but just playing for each other, continuing to love each other and having these great relationships that no matter how the season or game goes, you’re always going to fight for each other,” Greene said. “That’s one thing this team has.”