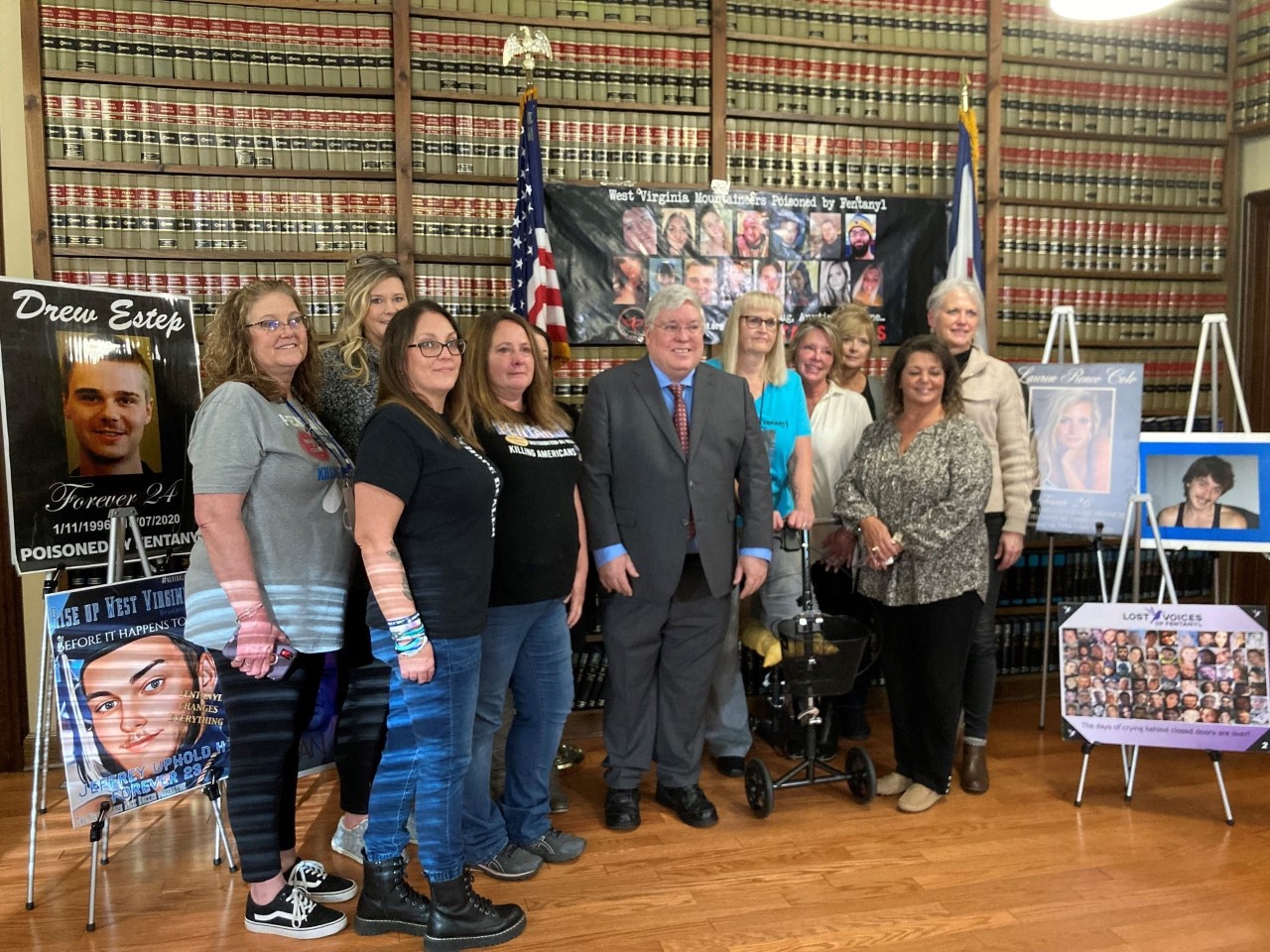 A group of women who lost loved ones to fentanyl shared their stories alongside A-G Patrick Morrisey in Charleston Monday. PHOTO: WVAG

CHARLESTON, W.Va. — Those who have lost loved ones to fentanyl refuse to consider their loved one’s death an overdose. Several appeared alongside West Virginia Attorney General Patrick Morrisey Monday and explained what happened to their family members was not an overdose, but was a criminal act of poisoning.

“I remember the judge saying to the one from Detroit, ‘Are you an addict and he said no. Are you an alcoholic and he said no. Do you have a job? He said no. So you came to Morgantown, West Virginia to sell drugs? He sold pure fentanyl,” said Cherie Cole the mother of Lauren Cole.

Lauren, a standout athlete in high school and a former WVU cheerleader, had completed her degree and was a social worker.  She was found in her car dead after taking fentanyl, not realizing what she had obtained. According to her mother, she had battled addiction for a long time and the battle was still raging when she was introduced to heroin.

“She told me, ‘Mom, you can’t do this for me and if I hear these voices over and over in my head telling me to use, I’d rather die.’ I want people to know this is a disease, it completely changes the frontal cortex of your brain and you need long term rehab,” she added.

Lauren’s death is just one which was spotlighted by Morrisey as he called individuals to the podium to talk about their experiences and the horrors their family has been forced to endure after a loved one died using fentanyl, thinking it was another drug.

JoEllen Uphold of Bruceton Mills, W.Va. lost her son Jeffrey Uphold II in 2021. Authorities could not pinpoint a time of death because his body was found floating in the Monongahela River. An autopsy showed he was dead before he was thrown in the water and toxicology reports showed a high level of fentanyl in his system.

Tracy McNees lost her son Beau Patterson in 2017 only seven days after he got out of rehab.

“I don’t know why, but I know his drug of choice was heroin, but his toxicology report said he had died of fentanyl intoxication,” she explained.

Christina Nuce lost her son Daniel in similar circumstances. Only hours after he was released from the hospital into his own custody, he was dead.

“He was at his girlfriend’s house in Westover and was given what he thought was heroin. It turned out to be 170 nanograms of fentanyl. He was poisoned,” she said.

Morrisey said he would call on the new leadership in Congress to make the fight against fentanyl priority one. According to Morrisey the federal government can and should do more. He said the key components are coming from China and are assembled in Mexico before being smuggled into the United States and sold disguised as other drugs.

“Let’s start by getting fentanyl named as a weapon of mass destruction and let’s make sure the oversight is being done with the new Congress. That’s clearly important,” said Morrisey.

Fentanyl is now the number one killer of those between the ages of 18 and 46. Morrisey said the statistic was hard to believe and completely unacceptable.

“When you have the number one rated overdose deaths in the nation and the entire increase we saw this past year is from Fentanyl, it deserves broader action, both here in the state and nationally,” he said.