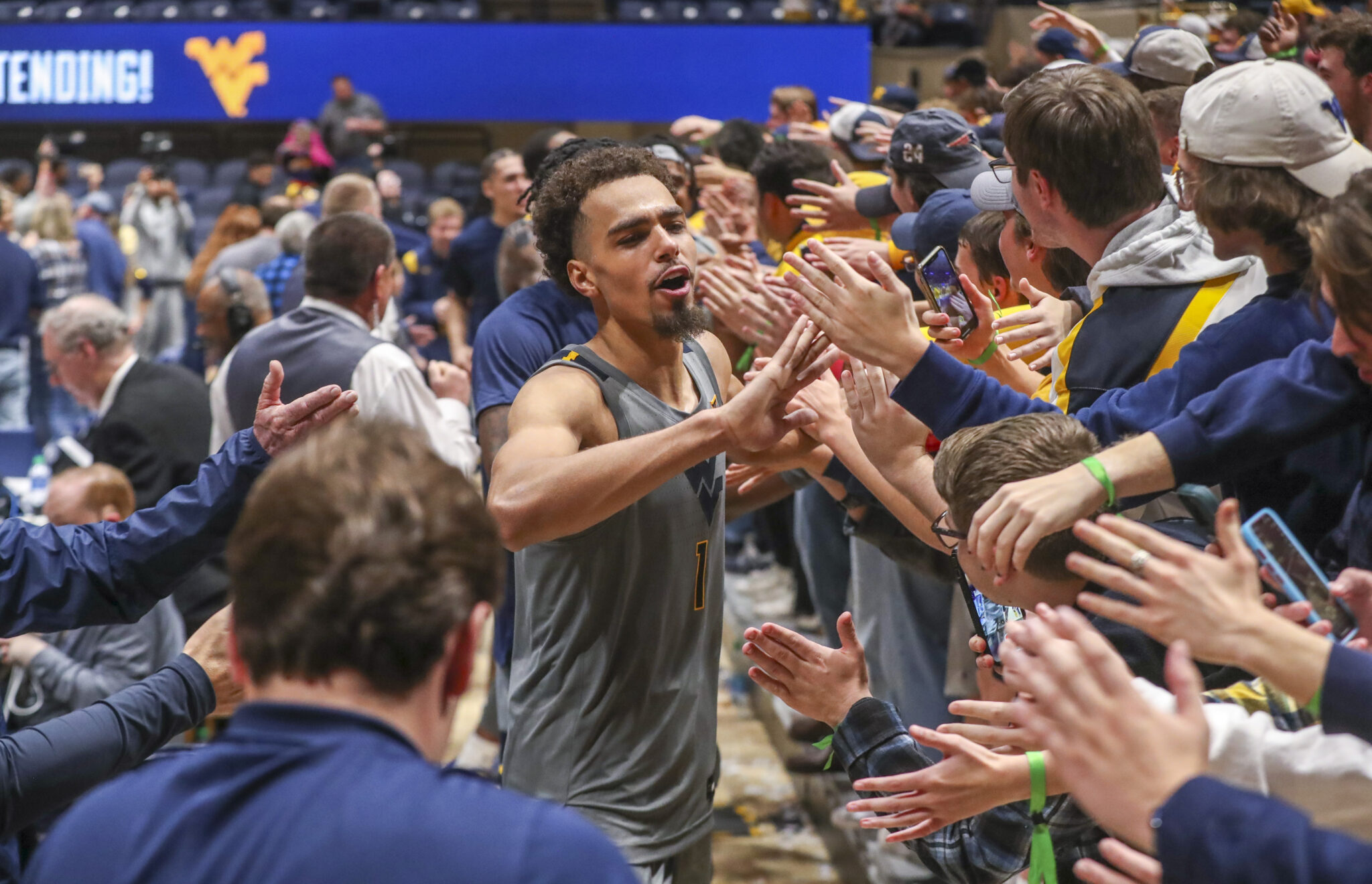 MORGANTOWN, W.Va. — In Saturday’s 81-70 win over UAB, West Virginia forward Emmitt Matthews Jr. made his 77th career start in his 102nd appearance as a Mountaineer.

Over the previous 101 games, Matthews surpassed the 16 points he scored against the Blazers only four times. He also made four 3-pointers in the victory, something he had never done in a West Virginia uniform, though Matthews accomplished it twice last season at Washington between his two stints in Morgantown.

“I got in the lab as the young people say,” said Matthews, as experienced a player on a WVU team not lacking in that regard. “I had a lot of work and touched on it a little bit in summertime. There’s countless hours in the gym and not giving up on yourself.”

The belief in his jump-shooting wasn’t necessarily always there for Matthews, a Tacoma, Wash., native who played extensively over each of his first three seasons at West Virginia before opting to be far closer to home and play one season in the Pac-12.

“It’s a confidence thing and a mental thing. It’s one thing to get in the gym and shoot jumpers by yourself or with a trainer or whoever, but getting out there in the game and having the confidence to shoot is a whole other thing,” Matthews said. “It’s my fifth year in college. I feel like I’ve been around the world and back playing basketball and I don’t feel like there’s anything that’s going to get in the way of me playing for my game.”

Matthews made 4-of-5 attempts from long range against UAB and finished with a team-high nine rebounds. On a team with several veterans that have consistently provided steady play through the season’s first 10 games, Matthews has been vital to the Mountaineers’ 8-2 start.

He is averaging 10.8 points on better than 47 percent field-goal shooting and has made 15-of-31 triples and 19-of-21 free throws. Matthews is also adding 3.8 rebounds and has only eight turnovers in 306 minutes — 57 more than the closest teammate.

“He wants to be here and certainly wants to be a part of what we get done here,” WVU head coach Bob Huggins said. “He’s really shot the ball well and he’s shot the ball much better than what he shot it before. He spent a lot of time fixing things with it. When it looked like they were about ready to make a run, he’s the guy who made big shots for us.”

Matthews exited the matchup with the Blazers 31 seconds into play when he left his feet to catch an inbound pass and was fouled by Eric Gaines, causing him to land awkwardly and tweak his knee. The injury initially looked as though it could be something serious, but Matthews returned to the hardwood less than 6 minutes later.

Matthews went on to make his first shot — a 3-pointer that left the Mountaineers with a 13-9 lead. He made two more from long range in the opening half, along with a dunk that gave him 11 points and helped WVU lead 40-31 through 20 minutes.

“It’s all dependent on time and score,” Matthews said of the perimeter shooting. “The first one I had was a little too open. After that, once you see one go in the basket, especially after being out for a minute, you’re feeling fresh. Even though I might have been feeling weird, I saw the hoop, shot it and I felt good. That’s really all there was to it.”

Huggins both spoke of Matthews’ improved perimeter shooting ahead of the 6-foot-7 forward’s fifth season of college basketball, and thus far, Matthews has done nothing to dispel that notion.

“Our versatility is really good,” Huggins said. “Emmitt was very good when he was here the first time, and he’s just shooting the ball so much better now and he’s so much more mature now that he’s a different guy.”

Matthews has followed a unique path back to Morgantown, allowing him to reunite with Huggins and point guard Kedrian Johnson, the only holdover from the 2020-2021 version of the Mountaineers that remains on the current roster.

His versatility, defense and leadership were expected to be important to the Mountaineers. Through 10 games, it appears Matthews’ perimeter shooting will be as well.

“He sincerely wanted to play for West Virginia, which is really neat when you think about it,” Huggins said. “A guy from all the way out in Washington to think that much about coming back here and making a run. It’s kind of like you feel unfulfilled. We were good when he was here, but we weren’t great. He wanted to be able to play on as a team that was great.”

Sports
West Virginia falls short at No. 15 TCU, 76-72
The Mountaineers missed out on a golden opportunity, trailing for the final 35-plus minutes as the Horned Frogs evened the season series despite playing without their leading scorer.
By Greg Carey
Sports
Poca posts wire-to-wire win over Ravenswood, 53-39
The Dots were led by Kambel Meeks' 16-point effort in one of their best performances of the season.
By Joe Brocato
Sports
With Smith set to return, Mountaineers brace for matchup with No. 24 Texas
West Virginia will get starting point guard Madisen Smith back from a one-game absence, but a tough test awaits in the Longhorns, who arrive in Morgantown atop the Big 12 standings.
By Greg Carey
Sports
WVU to face all four Big 12 newcomers in 2023
The Big 12 Conference released the 2023 football schedule for all 14 teams on Tuesday.
By Joe Brocato