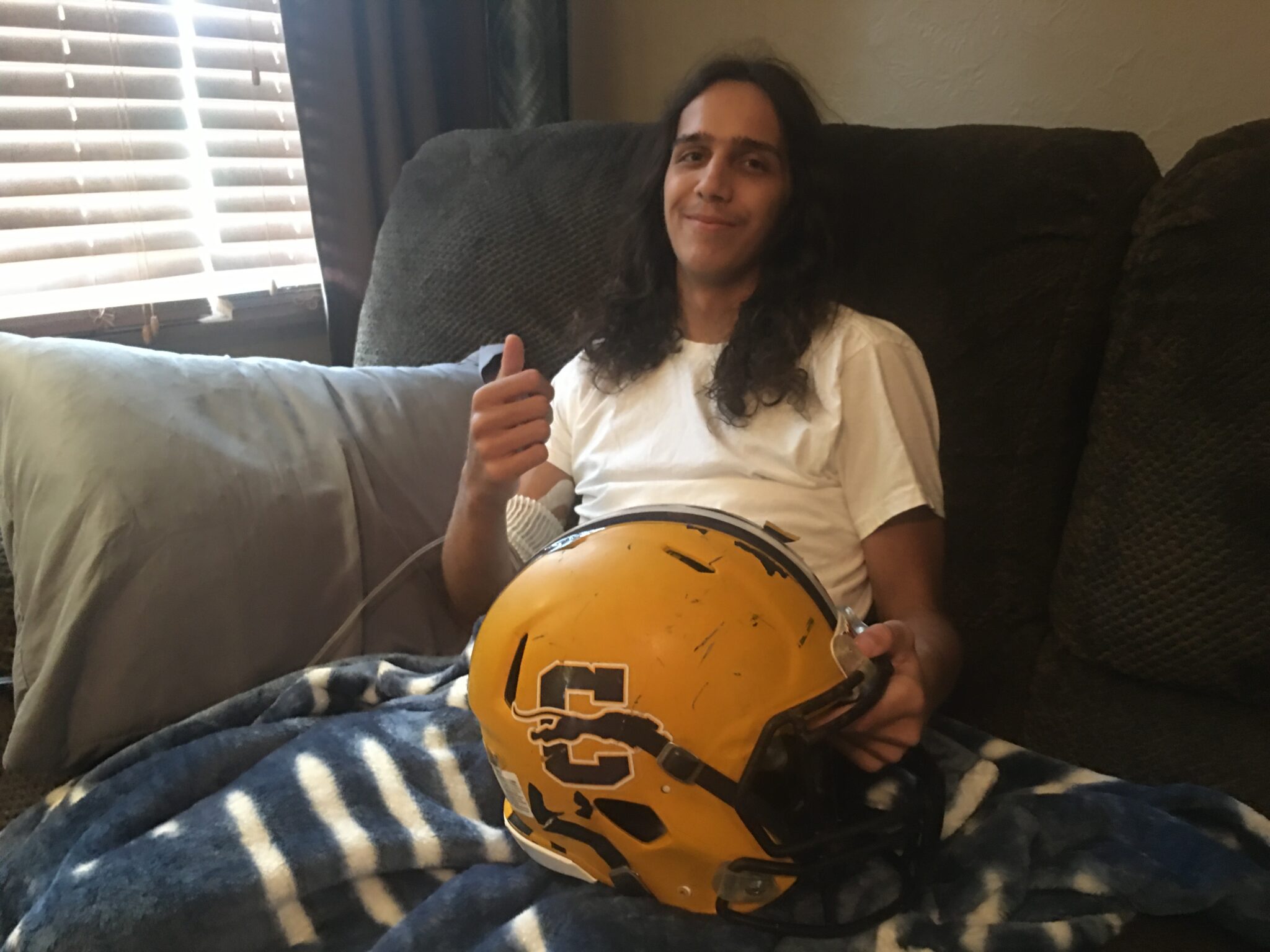 Clay County defensive lineman Jacob "Salty" Morton at home and on the mend less than two months after his life nearly ended in a car wreck.

BELVA, W.Va. — Adam Morton pulled a syringe of saline solution and injected it into one of the three I-V ports on his son’s right arm.

“I’m hoping soon, they’ll be able to get his PICC line out and then I can go on oral anti-biotics,” said Jacob Morton.

The Clay County High School Senior with his long flowing locks laid on the couch and teased his dad who had become quite a hand at administering I-V drugs. He didn’t have a choice. Adam didn’t mind the teasing, he was elated to see his son smiling, happy , and feeling better. Only a few short weeks ago, it appeared Jacob, known to most as “Salty”, wouldn’t be around to enjoy the Christmas holiday. Most didn’t realize just how close he was to not even being around to enjoy the end of the high school football season.

Salty, for a second straight year, was a first-team All State defensive lineman for the Clay County Panthers. He was described as a one man wrecking crew on the defensive line and in his three years became the all time sack leader in school history. But he was forced to miss his last two games of his career due to a freak accident which nearly killed him, but also gave hope to an entire community and state.

The Clay County Panthers earned a home playoff game in the 2022 season. The team hoped for the first time in school history they would get to play the home game at their home in Clay. On Halloween afternoon, a torrential downpour soaked the field next to the high school in Clay, W.Va.  While awaiting an inspection from the West Virginia SSAC, Head Coach Jason Nichols worried practice or games on the field amid those conditions might ruin the chance of hosting.  To protect the field, he cancelled a J.V game that day and called off  the varsity practice.

The decision meant his star senior defender would get a rare day off.

“He asked me two or three times if we weren’t going to lift or have practice. Finally he said, ‘If we’re not having practice, I’m heading home. Twenty-five minutes later, I got a phone call,” said Nichols.

Adam got a similar phone call with a very sinking feeling.

“My niece called and told me he had wrecked and I need to hurry. It was a pretty traumatic moment. It was something no parent ever wants to see in their life, I’ll tell you that,” he explained.

“It was about 11:00 and I was headed home. The road was wet and there was a bunch of leaves on the road as I went around the curve and the wreck just happened,” said Salty.

The car rolled over the embankment, then took a second turn end over end and landed upside down in a creek over the bank from Route 16 only a few miles from the Morton home in Belva. Quickly people were on the scene including Salty’s aunt and his dad. But ahead of that, he was able to free himself from the wreckage and crawl out into the creek.

“My shoulder was pinned by the windshield and I managed to free myself and crawl out into the creek,” he said.

The position where he wound up put his mid-section under the extremely cold water for an extended period of time as he waited for help. According to doctors, looking back on the incident, the cold water acted as an ice pack and constricted blood vessels, slowed swelling, and in all likelihood saved the young man’s life.

Adam and others were able to quickly get to Salty and get him up the embankment and into the ambulance on the way to the Charleston Area Medical Center. During the ride, Salty had been talkative and even indicated he was hungry. The attitude gave Adam and Nichols some hope he wasn’t seriously hurt. However, as time progressed, it became more and more clear that wasn’t the case.

“As they got in there and started looking around they realized he lost a kidney, his spleen, his diaphragm was ripped in two, and a week later he lost his gallbladder,” said Adam.

“As the hours went by we learned additional information and it became very scary. Then when we found out the total extent of his injuries we were all completely devastated,” said Nichols.

The waiting room at CAMC General was filled with friends, teammates, and well wishers. Salty spent hours in surgery as a trauma team at CAMC put his broken body back together. Along with his missing organs he was nursing eight broken ribs and developed a massive internal infection. The prognosis for his recovery wasn’t good. It appeared the young man who had inspired so many and was one of the toughest fighters on the grid iron might not survive.

Across social media, the word started to spread about Salty’s accident. West Virginia’s football family came together like only they can. The Morton family was suddenly inundated with prayers, food, gifts and support. Neither Adam or Nichols was prepared for the outpouring of love.

“The amount of support and phone calls and texts that I personally received was so enormous,” said Nichols. “So many people reached out and sent cards, and prayers and well wishes. It was very moving how the football family and people in general would reach out,”

“It was unreal. The people that called, the prayers and just everything was unbelievable. We had people contacting us we’d never played in football. We had so much support from sports fans all across the state,” said Adam.

Adam struggled to name names of those who stood out. He recalled the head coach at East Fairmont who was the first to reach out and send Jacob a care package of al of his favorite foods. There were others like North Marion, Parkersburg South, Poca, Roane County, Braxton County,  and Summers County.

“I hate to keep saying names, because there were so many I couldn’t keep track of them all because they were coming in so fast,” Adam explained.

Salty had no idea.

As his son’s recovery developed, Adam and his wife made the decision to transfer Salty from CAMC to Baltimore and into the care of the medical team at Johns Hopkins University Medical Center. The recovery from the infection finally started to take shape and it came rapidly.

After multiple surgeries and rounds and rounds of powerful antibiotics, Salty was able to return to West Virginia and continue his recovery at home by the Christmas holiday. To his family, friends and teammates it was a true Christmas miracle.

Our man @JacobMorton54 will be home for Christmas. He is in the vehicle and on his way home right now. A true miracle. Blessings like this are days we will remember forever. Salty is coming home. #alarmsounded.

“I read that he had a three percent chance of living at one point. I never allowed myself to consider that,” said Nichols.

“Yes sir. It had to be an angel that placed him perfectly in that water. They said the way the water was flowing over this body actually saved his life. They said he was perfectly placed there and we know only certain people can do that stuff,” he explained.

It was a trying time for Nichols who in his six year stint as the head coach at Clay County has had to deal with a player dying on the field, a destroyed field house and facility from a major flood, Covid, and a myriad of other challenges. But taking his team to Braxton County for the final game of the regular season was his worst struggle.

“It was the hardest thing in my short time as a coach that we’ve dealt with,” he said. “Those last two games it was almost as if we didn’t want it to end, but it wouldn’t have been the worst thing had it ended.”

For Salty, the skinny lineman with a penchant for tackles, his playing days are over. It’s also unclear when he’ll be able to return to school, but he has his eye on the future.

“I plan to go to a trade school. I plan to be a lineman and work on power lines. That’s my future,” Salty explained.

I suggested he’d need to get enough strength back to climb a pole.

“Oh, I’ll be strong enough to climb a pole, don’t you worry,” he laughed.

“Salty is a very determined individual. That is evident by the way he played, but knowing him personally, the way he played is the way he attacks life. He just attacks everything that’s in front of him. That’s who he is. That’s why I never considered that he wouldn’t make it,” said Nichols.

Doctors now believe despite missing organs, the prognosis for a full recovery is very likely and Salty will be able to live a full and normal life.

Adam and his family wanted to use this story to reach out to the countless high school football coaches, fans, and others who offered up their support for Salty during his nearly two month ordeal.

“Thank you to everybody for their support and their prayers. There are too many to thank. So, I’m thanking them now. His mom thanks them. We thank them for what they sent, what they said, and especially what they prayed. Without them, this wouldn’t be possible,” said Adam.

He also wanted to ask people to consider donating blood, especially during the holidays.  According to Adam it took 22 units of blood to save his son’s life and if those hadn’t been donated it wouldn’t have been possible.

“I want everybody to know I’m doing a lot better than what I was and I’m hoping to make a speedy recovery. I want to also thank them for everything,” Salty said.