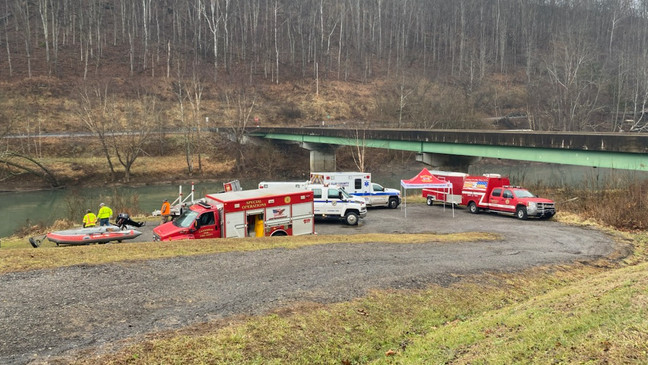 The scene along the Elk River near Duck. (Photo WCHS-TV)

DUCK, W.Va. — The bodies of two men were recovered in the Elk River Saturday near the Braxton-Clay county line.

The men went into the river Friday afternoon after State Police Clp. F.L. Raynor was trying to arrest one of them on outstanding warrants, according to state police.

Raynor had put Derek Lee Smith, 29, of Duck, in handcuffs close to the Villanova Ridge Road Bridge near Duck at about 4 p.m. Friday when Smith ran and jumped off the bridge into the river.

Troopers said Rwynor went into the river and tried to save Smith but couldn’t. The second man, Darrius James Nottingham Jr, 61, of Duck, continued in the water and also came up missing.

Several dozen first responders, including a number of dive teams from across the region, returned to the Elk River site Saturday morning after calling off the search due to darkness Friday.

Cpl. Raynor first spotted the men walking on state Route 4 and believed there was an arrest warrant outstanding for Smith. When he confirmed the warrant he attempted to take Smith into custody.