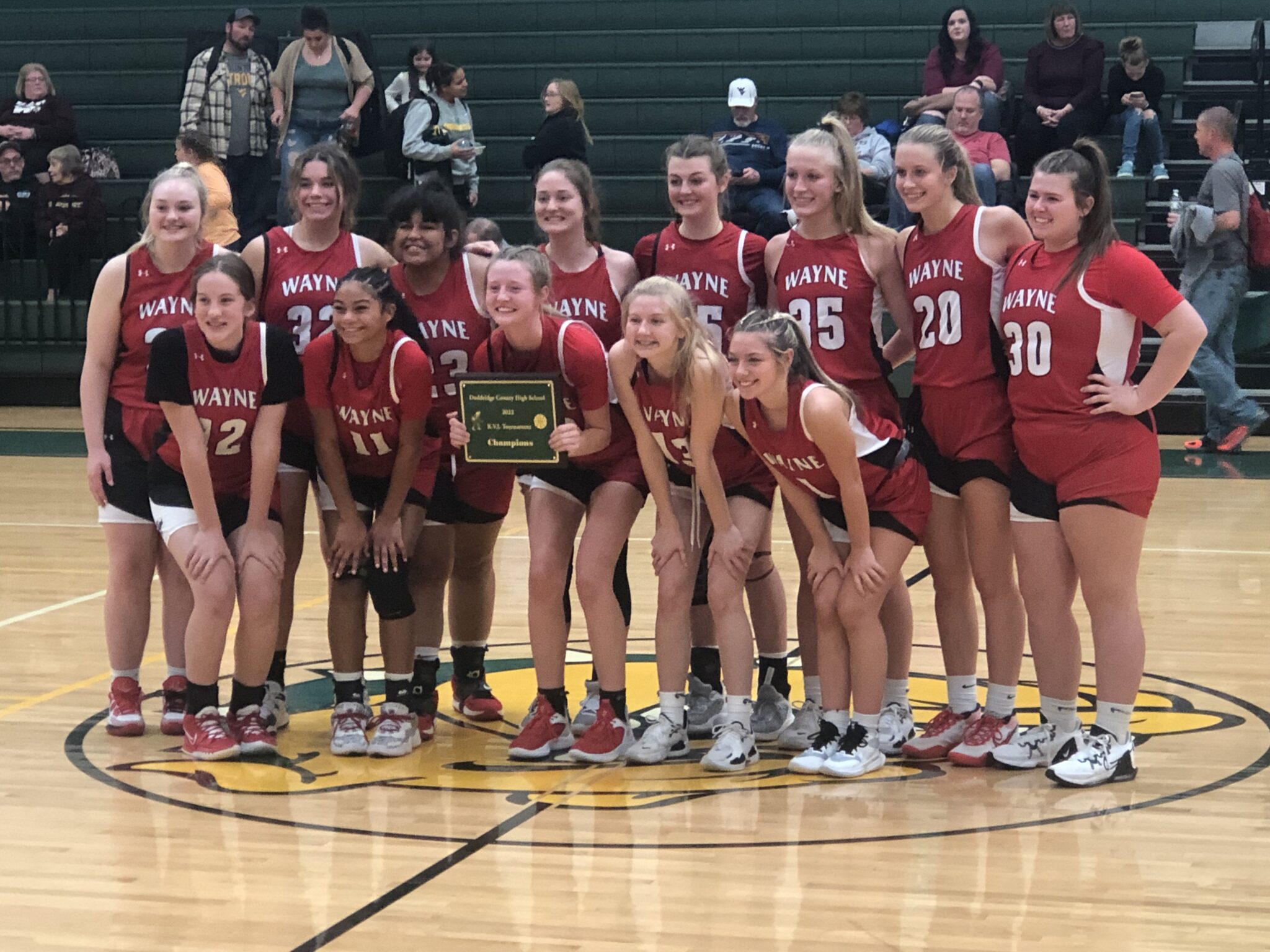 Wayne won the Kermit Vanscoy Invitational with a 44-33 victory against Williamstown. Photo by Greg Carey/WVMetroNews.com

Fortunately for the Pioneers, they could hardly be more stout defensively.

That proved to be the case again Friday night as Wayne utilized zone defense and pressured Williamstown into 28 turnovers, and the Pioneers pulled away from the Yellowjackets in the third quarter to win 44-33 in the the Kermit Vanscoy Invitational final at Doddridge County High School.

“We’ve held five teams under 35 points,” Williamson said. “That’s been kind of our M.O. We still haven’t shot the ball to near our capabilities and what I’ve seen in the past. We just haven’t done that and hopefully it’ll come. But we seem to score enough to get it done somehow or the other.”

Both teams struggled offensively for much of the first half, though the Pioneers (7-0) got 12 points from sophomore standout Brooke Adkins through the first two quarters. Wayne held a 16-5 lead at one point, before Riley Landis’ conventional three-point play 2:30 before halftime sparked a 7-0 Williamstown run that allowed the Yellowjackets to trail by four at halftime.

“It was a low-scoring game,” Adkins said. “What really got us working on defense was rotating. When they would rotate the ball, a lot of times it would be open on the backside, but we realized we needed to rotate and that we had to fill the gaps in.”

But as was the case for the first 13-plus minutes of play, Williamstown struggled offensively throughout the third quarter, creating a deficit that proved insurmountable.

Williamstown (7-2) didn’t score for the first 6:10 of the frame, and when Landis hit a leaner for what proved to be the Yellowjackets’ only points of the quarter, Wayne’s lead was 23-14.

The Pioneers hit only one field goal — a Chyenne Williams follow-up — during the 7-0 spurt to open the second half, which was keyed by Addie Adkins making 3-of-3 free throws after drawing a foul on an attempt from long range.

Wayne also closed the third on a 6-0 spurt that featured buckets from Brooke Adkins and Laneigh Brooks in addition to two more Addie Adkins free throws.

Williamstown had 10 of its 28 turnovers in the third quarter.

“We play the 1-2-2 and 1-3-1 so well,” Brooke Adkins said. “We just know our roles on defense and we all have our own spot and know what to do and what not to do. We have to trust each other and have each other’s backs on things and we’re good on defense.”

Wayne was hardly threatened throughout the fourth quarter and built its lead as large as 18 at 42-24, before Landis scored nine consecutive points that featured two triples and allowed the Yellowjackets to cut their deficit in half.

Addie Adkins finished the scoring with two free throws and made all nine of her attempts from the charity stripe in the victory.

“I was a little disappointed in the end because we didn’t take care of business the way we should’ve,” Williamson said. “Part of that is we’re still awfully young and start three sophomores.”

Wayne had only eight turnovers, but shot just 26 percent from the field, though the Pioneers made 13-of-16 foul shots.

“We’ve won games on the defensive and I don’t have any problem with that at all,” Williamson said.

The Yellowjackets got a game-high 24 points from Landis, who made nine of her team’s 12 field goals.