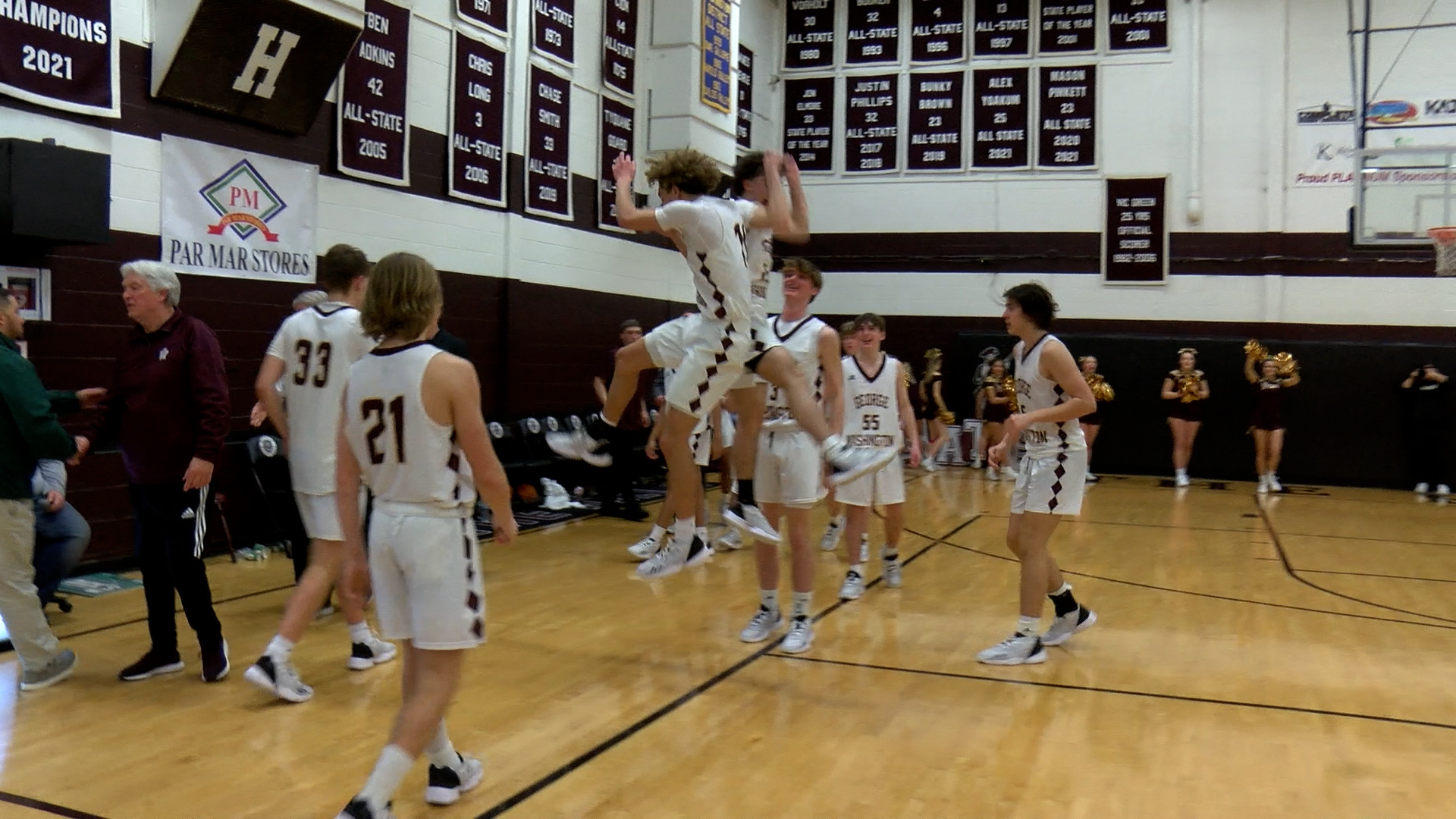 CHARLESTON, W.Va. — In 40 minutes of basketball, neither George Washington or Huntington led by more than seven points. The Patriots outscored the Highlanders 16-13 in the second overtime period to remain unbeaten with an 86-83 victory in a matchup between two of the state’s top teams.

“That’s why I love coaching high school basketball,” said George Washington head coach Rick Greene. “It was a great example of two very good teams and neither one was going to give in. If it goes longer, they very well could have won it. So I am just fortunate we got out of here.”

Neither team was able to build a lead larger than six points in regulation throughout the tightly-contested game. George Washington led 14-10 after the first quarter. The teams exchanged lengthy scoring runs in the second stanza. Huntington scored the first eight points in the frame to build an 18-14 lead. George Washington used a 10-0 run later in the quarter to take a 28-24 lead into intermission.

The Highlanders (7-2) used a 12-4 spurt to take a 46-43 lead at the end of the third quarter. The Patriots regained the advantage with an 8-2 run midway through the fourth quarter.

Trailing 63-61 with ten seconds left in regulation, Huntington’s Duane Harris hit a runner in the lane to tie the score at 63. GW was unable to answer the other way and the game went to overtime.

With the game tied at 70 entering double overtime, consecutive triples from Dawson Lunsford and Ben Nicol gave the Patriots an 76-71 cushion.

“It was huge because then we can defend a different way. You can go out a little bit further and if they drive, a two doesn’t hurt you as much. When you have a two-possession lead, I think it takes pressure off free throws if you go to the other end.”

GW built an 81-74 lead with a minute to play when Brendan Hoffman hit a 3-pointer as part of his game-high 31-point effort. Harris hit a triple of his own with three seconds left to pull the Highlanders within a point at 84-83. But GW hit a pair of free throws and a late Highlander shot missed at the buzzer.

“I think we got to their shooters. I think they hit tough threes. Harris’ three coming across the top, that’s like a video game. I feel we really made them work for those shots and I think that was crucial.”

George Washington (9-0) remains the only unbeaten Class AAAA team in the state.

“It is very significant but we have to back it up. It puts you in great shape in the conference but every conference game counts.”

Before the game, Greene was honored for earning his 500th career victory in last week’s win at Spring Valley.

Sports
Barr's basket with three seconds left lifts Clay-Battelle over East Hardy, 76-74
The Cee-Bees trailed by as many as a dozen points in the first half before rallying for their 11th win.
By Joe Brocato
Sports
Herd set to battle Louisiana in Sun Belt showdown
Marshall enters one game behind the Ragin’ Cajuns in the conference standings.
By MetroNews
Sports
MEC This Week - Episode 20
Travis Jones and Taylor Kennedy get you ready for this weekend in the MEC
By Taylor Kennedy
Sports
Highlights: Roane County defeats Braxton County, 62-33
By MetroNews Staff