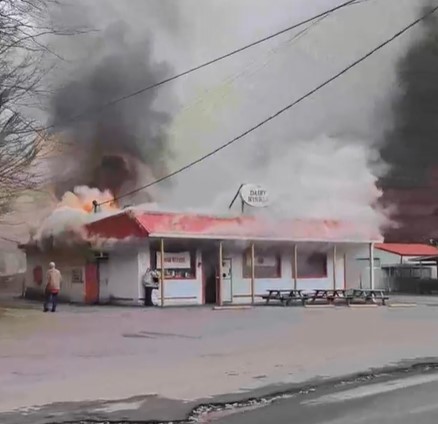 The blaze broke out at around 10 a.m. at the Dairy Winkle on Campbells Creek Road.

“It was a heavy fire when they got there,” Kanawha County Office of Emergency Services Director C.W. Sigman said. “It’s a big loss.”

Flames and heavy smoke were showing when firefighters arrived on the scene. Sigman said a local fire chief saw the smoke from the Yeager Bridge on the Turnpike.

“He reported it on the radio that there was heavy smoke as he was coming across the Turnpike. It was heavy fire already when the calls came in,” Sigman said.

It appears the fire began in the area of the kitchen where the deep fire was located. There were no injuries. Sigman credits the quick response of local firefighters.

“They fought that very aggressively, the crews inside and actually they got it under control pretty daggone fast,” Sigman said. “They were able to hold it to a one-alarm assignment.”

News
DeChristopher sworn-in as circuit judge in Monongalia County
Former prosecutor ready to take the bench.
By Mike Nolting
News
Regal fire: Cause undetermined; investigators say fire alarm wasn't working when firefighters arrived on scene
Investigators report alarm system was working 2 days before the blaze.
By Jeff Jenkins
News
State Police raid Logan coffee shop
Authorities are vague about what they're seeking, but indications are they search is tied to social media posts in recent days about inappropriate conduct surrounding the establishment.
By MetroNews Staff
News
Charities work to fulfill needs of fire victims in Charleston
Donations pour in and help dozens left homeless by a fire in Charleston to get back on their feet
By Chris Lawrence