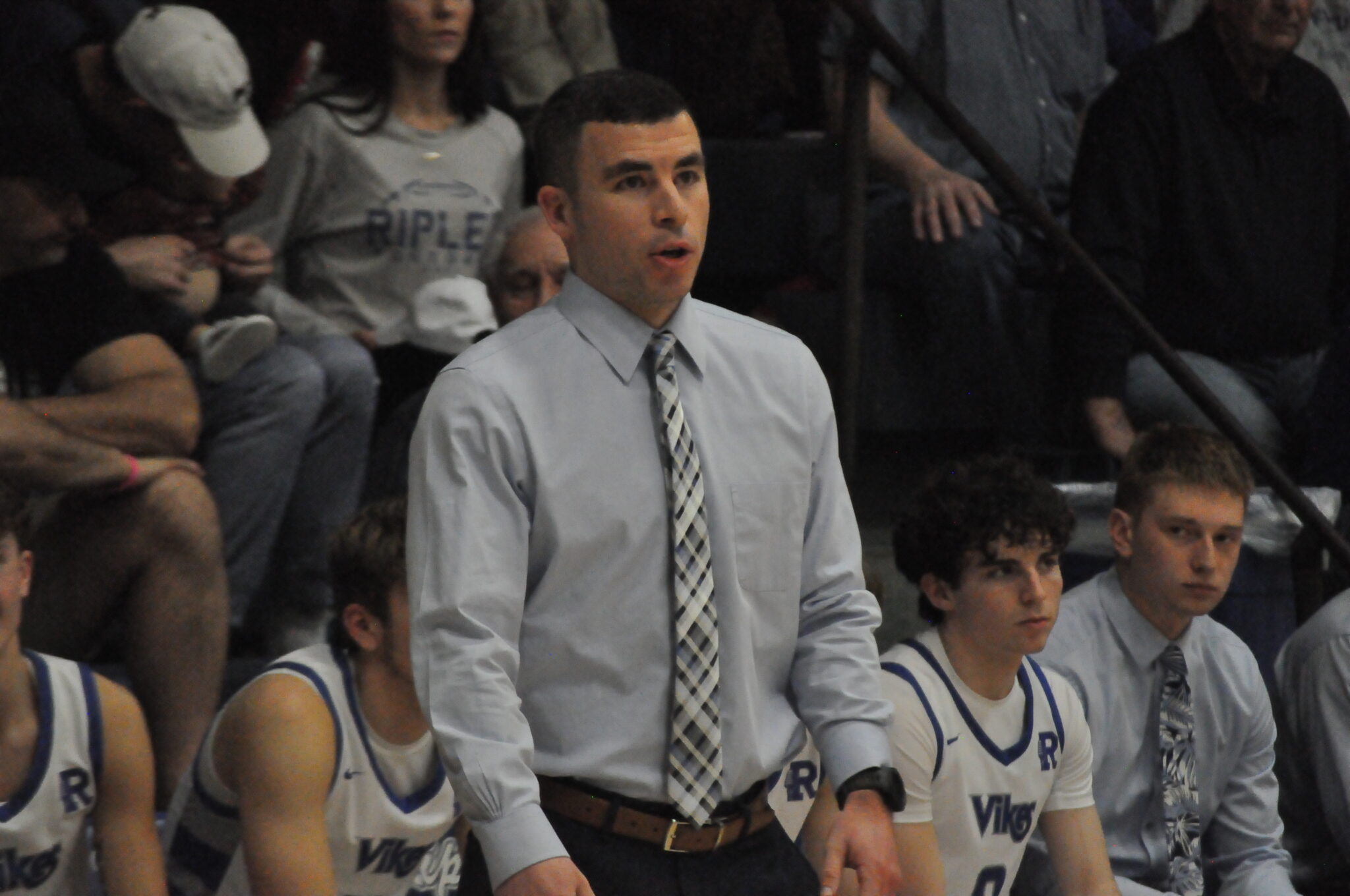 RIPLEY, W.Va. — There was no major celebration or massive sense of accomplishment from Ripley’s boys basketball program Tuesday in the aftermath of a 75-47 victory against Point Pleasant.

Rather, it was a more business-like approach from Vikings’ head coach Derek Mullins, who had just seen his team outscore the Big Blacks 28-9 over the final 8-plus minutes to pull away and win comfortably on a night when it often played in spurts.

“We didn’t play very hard in the first and third quarters,” Mullins would say. “We tend to play two really good quarters every game, but we need to try to find a way to play 32 minutes.”

The thought that Ripley hasn’t put it all together yet, and perhaps hasn’t come all that close to doing it, is a scary thought for future opponents.

For the first time since 1964, the Vikings (11-0) remain unbeaten this late into a season. For as impressive as the unbeaten mark is, there’s more reason for optimism than just that.

Reserve guard Dylan Casto hit six 3-pointers and scored 17 of his 22 points against PPHS in the opening half, while guard Carson Hedrick is a steady presence off the bench as one of the team’s three seniors with Johnson and Isaiah Casto.

Ten of Ripley’s 29 field goals in the victory over the Vikings came from long range.

“Last year, we didn’t shoot the ball well and a lot of guys lived in the gym in the offseason,” Mullins said. “When we can spread it out and have guys shooting it well from the outside, Luke’s a really hard guy to stop inside if it’s 1-on-1. He can do a lot of different things inside. It starts with a couple seniors in Luke and Isaiah Casto and it just builds from there. They did a good job of keeping calm, cool and collective, and whenever things weren’t going our way in the first quarter, they got it rolling in the second quarter.”

With his mixture of size and skill, Johnson is the focal point of an opposing team’s game plan. Point Pleasant had an adequate matchup for him with its own center in Eric Chapman, who was giving up only a few inches to Johnson and did his part to allow the Big Blacks to hang around by leading all players with 27 points and 12 rebounds.

Still, Johnson was effective working in the high post and low block areas and made 11-of-18 shots in a 24-point performance to go with a team-best nine boards. He also consistently found open teammates whether near the basket or on the perimeter.

“I know I can score the ball, but I’m trying to help us,” Johnson said. “When I catch it up top, I can see most of the court and I’m just trying to do whatever I can to help us.”

Johnson’s success hasn’t exactly come by surprise. As a sophomore, he was a Class AAA all-state honorable mention pick, and last season, worked his way up to second team all-state status with an average of 14.5 points.

As the younger brother of two former RHS standouts, Johnson plays with no shortage of expectations. His oldest brother Chase played college basketball at both Florida and Dayton, while middle brother Ty played at West Virginia Tech.

“The biggest thing I’ve learned from them is playing hard,” Johnson said. “Between the three of us, we are or were kind of used to playing 32 minutes a game here, and it’s been that way about the last 10 years.”

Mullins believes growing up in a basketball-crazed family has only been to Johnson’s benefit, as is the unique skill set he possesses for someone that size.

“His IQ is extremely high,” Mullins said. “He had two brothers that were extremely good basketball players and part of it is the bloodline and being it around it all his life. He’s very coachable now. His freshman year was iffy and sophomore, junior and senior years, he’s kept getting more and more coachable.

“He can really step out and make a jump shot and whenever he lets the ball come to him and down inside, he can do a little bit of everything. One of the biggest things he’s really improved on is not dribbling the basketball a whole lot when he’s inside. He realizes he’s 6-11 and needs to keep it high and go up with it. He does a good job of finding positioning whenever the ball is not being passed to him. He’s doing all his work ahead of time. We’ve tried to preach to our bigs, whenever it’s working around, do your job before the ball gets to you and then it makes your job so much easier.”

Still, Johnson is far from the only reason the Vikings have established themselves as a force to be reckoned with at the midway point of the season.

Point guard Isaiah Casto has experience and the ability to score and set teammates up to do the same, as evidenced by his nine points and seven assists in the most recent victory. Goode is a versatile player and can do damage with his shooting and penetration, while Myers contributed seven boards and five assists against Point.

Dylan Casto, who canned five first-half triples, forces defenses to stay honest on the perimeter and allows Johnson to operate with more space.

Mullins has instructed his team to focus on each game individually and win the day in an effort to prevent the Vikings from getting ahead of themselves.

“You have to find a way to win. It starts in practice with us and builds off of that,” Mullins said. “With our competitiveness and having ten guys that can get up and down in practice, that just makes our game-like situations so much better for us. We’re trying not to be complacent. This hasn’t happened at Ripley since 1964. It’s something we’re not used to, but we’re finding a way to win and we’ve been in some close games. We’re not going to be complacent about anything. We’re going to continue to get better each day.”

As that occurs, confidence grows and Ripley’s goal is to keep stacking wins in an effort to best position itself for a postseason run.

The Vikings have made the state tournament only once before when they lost to Fairmont Senior in a 1997 Class AAA quarterfinal.

“We’re not used to winning,” Johnson said. “Last year we went .500 and the year before it was less than that. This is a big change for us. But with us being older and having three seniors and eight juniors, we’re pretty mature. If we can keep our heads straight, we will be fine.”