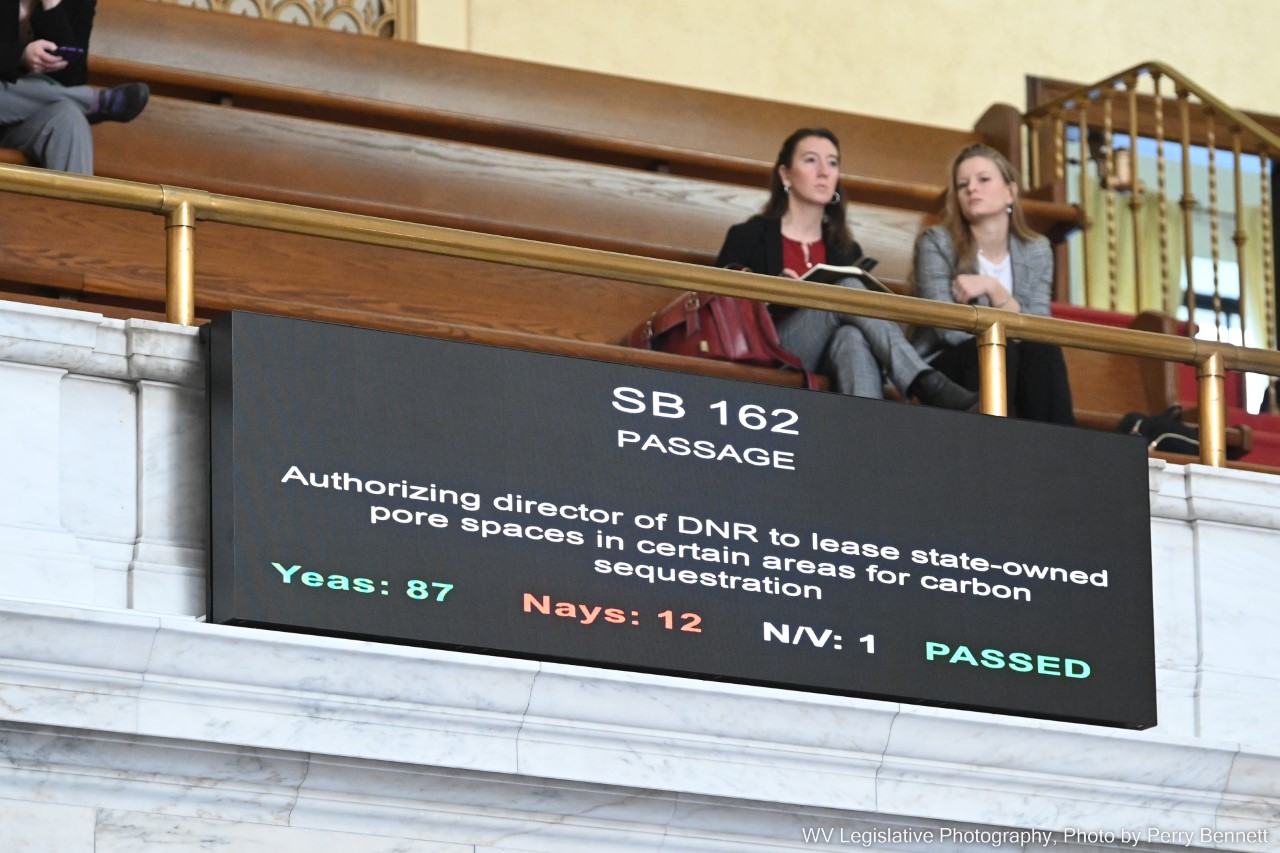 CHARLESTON, W.Va. — A Senate bill to allow for carbon sequestration under state lands cleared the House on Thursday and will return to the Senate.

SB 162 allows the Division of Natural Resources, with approval of the Commerce secretary, to lease state-owned pore spaces underlying state forests, natural and scenic areas, wildlife management areas and other lands under its jurisdiction for underground carbon sequestration.

Carbon sequestration will play a role in West Virginia’s energy future, state leaders and members of West Virginia’s Congressional delegation have said many times, particularly as hydrogen power production – still in its infancy – advances and the state is working to have a federal hydrogen hub located here.

The leases would be offered via sealed bids to the highest responsible bidder, with the proviso that DNR may reject all bids and re-advertise should the round of bidding prove unsatisfactory. It allows the secretaries of Commerce and Economic Development to jointly agree to bypass the bidding process and directly award a lease if it is a necessary component of an economic development project and would net a market value or greater royalty.

The bill prohibits such leases under state parks. All proceeds would go to the DNR.

Commerce Secretary James Bailey explained on Hoppy Kercheval’s Talkline on Wednesday that carbon is a byproduct of hydrogen production. It can be liquified and then piped to underground storage areas and injected into pore spaces – tiny open areas inside the rock strata for storage. It’s essentially the opposite of extracting gas and oil from the rocks.

Bailey told the House Judiciary Committee on Monday that among the bill’s benefits will be revenue and economic development opportunities should the state be chosen to house on of four regional hydrogen hubs to be established by the U.S. Department of Energy. West Virginia has made the short list in this competition and is preparing a more detailed proposal.

SB 162 would enable the state to make money from carbon sequestration projects. What does this mean? James Bailey, WV Commerce Secretary, provides the details to this bill to @HoppyKercheval. WATCH: https://t.co/yCFQ3nDJuy pic.twitter.com/6LgGKvwegx

But even if the state should not get a hub, he said, it paves the way for other future economic development projection.

Bailey said state leaders felt that DNR lacked clear statutory authority to undertake the leases, and this bill clarifies that. It follows last year’s passage of the Carbon Sequestration Act which says that the rights to underground pore space lie with the surface owner – as opposed to mineral rights where ownership can be severed.

The House adopted the amended version of the bill that came out of Judiciary. The little discussion there was focused on party politics and Green New Deal issues rather than the bill itself.

The vote was 87-12 with all the votes against it coming from Republicans. It goes back to the Senate for concurrence on the House amendments.

The House also passed a related bill, SB 161, which enables the DNR to sell, lease or otherwise dispose of property under its jurisdiction. It removes and updates some outdated code.

The vote on this one was 94-5, again with all the objections from Republicans. It also returns to the Senate for amendment concurrence.

News
Annual West Virginia Hunting and Fishing Show set for this weekend
The 2023 show will feature modifications to make seminars and stage demonstrations a larger part of the annual gathering.
By Chris Lawrence
News
New River CTC plans to buy jet plane for new aviation program
The AEP Foundation presented a $100,000 check to the school on Wednesday.
By Carrie Hodousek
News
In West Virginia's jails 'we're working our people to death' and they're quitting
Corrections officers at West Virginia jails are at a 33 percent vacancy rate with those remaining often working 12 or even 16 hour shifts.
By Brad McElhinny
News
Mannington police officer accused of malicious assault fired
Council says he was an at-will employee.
By Mike Nolting