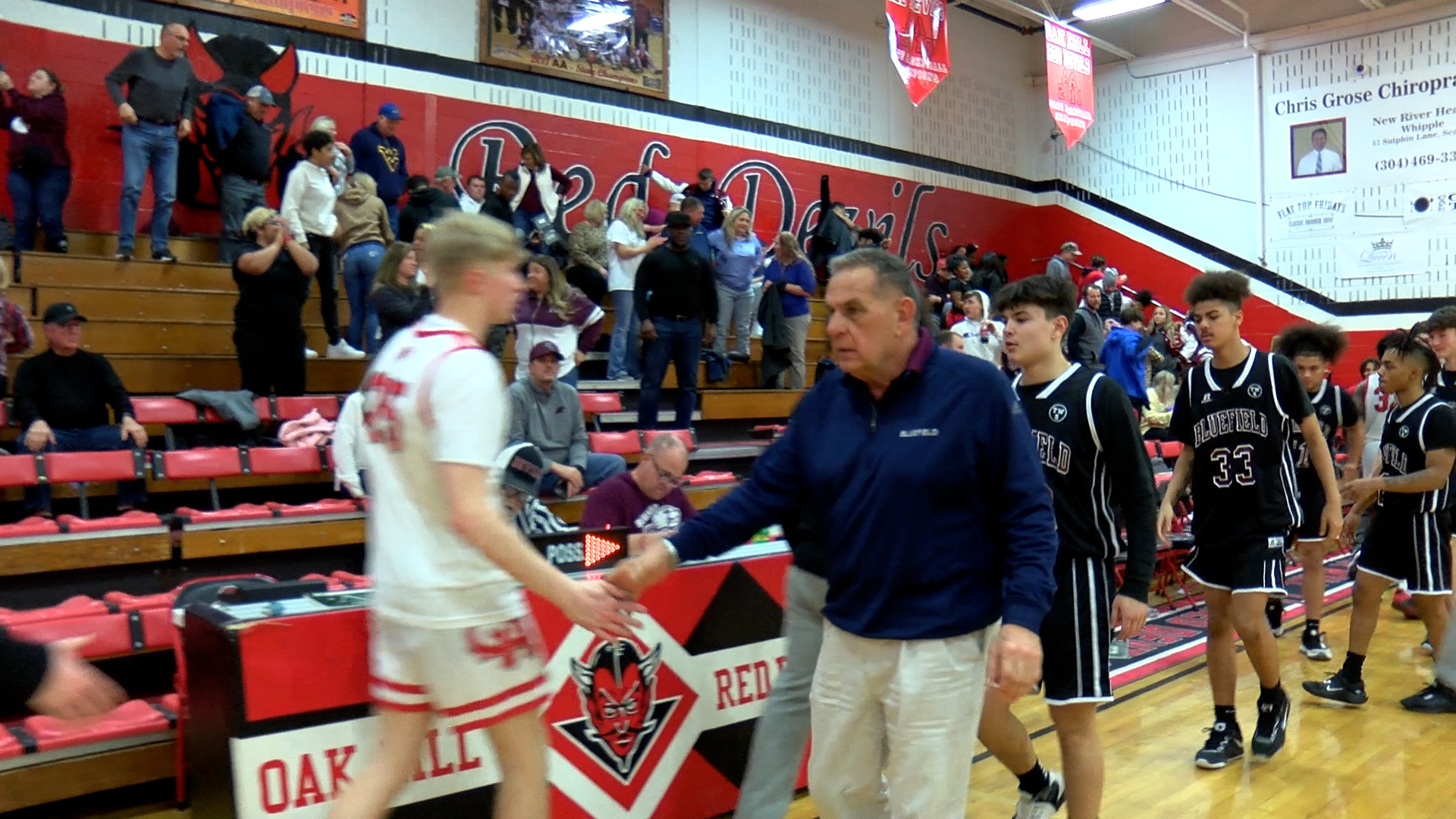 OAK HILL, W.Va. — Bluefield put together three impressive quarters to build a sizable lead at Oak Hill and the Beavers held off a late rally from the Red Devils to win 54-44 at the Lilly Center.

The Beavers (8-3) built a 21-point lead going into the final frame as they collected an impressive road victory despite scoring just four points in the first six minutes of the fourth quarter.

“This is a very difficult place to play. We were pretty well prepared and I am real proud of the kids in how they hung in there and did some things well at the end. We jumped out to a good-sized lead in the second quarter. You have to play hard for four quarters here,” said Bluefield head coach Buster Large.

The Beavers allowed seven, six and ten points respectively in the first three quarters to build a 44-23 cushion.

“We played well man-to-man and we really didn’t press a whole lot tonight. We’ve always been a good defensive team. I give Coach [Tony] Webster a tremendous amount of credit for that.”

Oak Hill chipped away at their deficit with a 12-2 run midway through the fourth quarter. The Red Devils eventually trimmed the deficit down to nine points before the Beavers scored six points in the final 1:30 to secure the win.

“We threw the ball away a couple times and they came down and hit a couple threes. But fortunately, we were able to get out of here with a win.”

“He has come a long way for us. He fits in well with Caleb Fuller, RJ Hairston, Sincere [Fields] and Kamron [Gore]. We’ve got a good nucleus.”

Hairston, Gore and Fuller each scored ten points for the visitors.

Now at the midway point of their regular season schedule, Bluefield will play two more teams in higher classes this week.

“We’ve got Greenbrier East (7-3) tomorrow night and Shady Spring (10-3) Friday. We’ll take it one step at a time. We’re going to work hard the next five weeks and see what happens. We’ll prepare ourselves for the sectional and regional.”

Sports
Brown taking measured approach to play-calling duties, but is 'keenly aware that we need to win'
Head coach Neal Brown says Chad Scott, West Virginia's recently-named offensive coordinator, will experiment with play-calling throughout spring practice before the Mountaineers decide who will handle that role.
By Greg Carey
WVU Sports
3 Guys Before The Game - Texas Recap - Texas Tech Preview (Episode 436)
The Mountaineers search for positive results in an important week.
By MetroNews Staff
Sports
As Johnson transitions quickly, Huggins hopeful new assistant can enhance recruiting around nation's capital
DerMarr Johnson is learning quickly during a midseason transition from Cincinnati to West Virginia. A native of basketball-crazed Prince George's County in Maryland, Johnson's ties could be beneficial to the Mountaineers toward their recruiting efforts in an area where Bob Huggins says they haven't done a good enough job landing players from in his tenure.
By Greg Carey
Sports
Stewart eager to lead his own position group at WVU
Blaine Stewart was hired Friday to lead the WVU tight ends.
By Joe Brocato