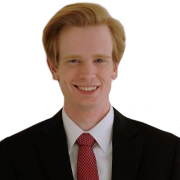 Alex Thomas joined MetroNews in January 2017 as a reporter/anchor.

He grew up in Weddington, North Carolina and graduated from the University of North Carolina at Chapel Hill, where he earned bachelor’s degrees in political science and broadcast journalism, as well as a minor in education.

From January 2014 to May 2016, he was a member of the Carolina Connection radio program, working as a reporter and later producer. While with the show, he was responsible for covering the University of North Carolina system and other higher education-related topics.

In addition to reporting as a student, Thomas also interned in the United States Congress for Rep. Robert Pittenger and Sen. Richard Burr. After graduating from UNC-Chapel Hill, he served as the Burton C. Gray Memorial Intern for Reason magazine.
​
In his free time, Thomas enjoys reading about American politics and country music. He is also an Eagle Scout.

US House passes infrastructure bill; McKinley one of 13 Republicans who supported legislation

After hours of debate among Democrats, the U.S. House of Representatives on Friday passed the $1.2 trillion infrastructure bill supporting road, utility and broadband projects.

The U.S. Supreme Court on Friday granted a review of a federal appellate court decision regarding the Environmental Protection Agency's authority to regulate air emissions.

Democrats in the U.S. Congress are working on passing two measures considered key parts of President Joe Biden's agenda after the president unveiled a slimmed-down framework on social programs.