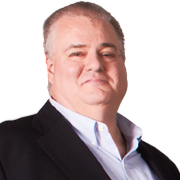 A Morgantown native and West Virginia University graduate, Greg Hunter has served as a co-host on the MetroNews Statewide Sportsline for over two decades.

Greg has covered Mountaineer athletics extensively for 30 years, the last 24 as the editor and publisher of the Blue & Gold News, a weekly magazine devoted to WVU sports.

After spending his freshman year at the University of Wisconsin-Oshkosh, where he played football for the Titans, Greg, a Morgantown High alum, transferred back to WVU, graduating in 1983 with a degree from the Perley Isaac Reed School of Journalism with an emphasis on news editorial. After his graduation from WVU, he spent the next five years working for the Preston County News/Journal, covering both news and sports for those publications. He won a dozen awards from the West Virginia Press Association for his sports stories and columns during that time.

In 1988, Greg, along with Bob Bucy, started publishing the Blue & Gold News, which now reaches 4,500 Mountaineer fans who live in every state in America.

In addition to his work with the Blue & Gold News, Greg serves as a co-host on the Statewide Sportsline. He also is part of the MetroNews team that provides postgame coverage of Mountaineer football.

Greg and his wife, Lori, who is a teacher in Monongalia County, have one daughter, Madison.

GOP picks up seats in Senate, stays same in House.

In an exit poll of West Virginia Democrats who voted in Tuesday’s primary: 54% of those polled are 50 of age or older 48% earn an income under 50K 33% identify themselves as independent/unaffiliated/other 48% claim they are very or somewhat liberal The No. 1 issue of those polled is the economy, with 57% saying that