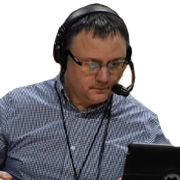 Travis Jones has extensive experience in sports broadcasting, having co-hosted the Statewide Sportsline on Sunday night since 1996. Jones is also the radio play-by-play voice of the Fairmont State University Fighting Falcons since 2013.

In addition, Jones has served as the Voice of Bridgeport High School football and basketball since 1993. Travis is also on the broadcast team for MetroNews coverage of the WVSSAC Super Six football championships and the boy’s and girl’s state basketball tournaments. Jones currently is the Program Director of 102 WVAQ in Morgantown. The Parkersburg, West Virginia native currently resides in Bridgeport, West Virginia.