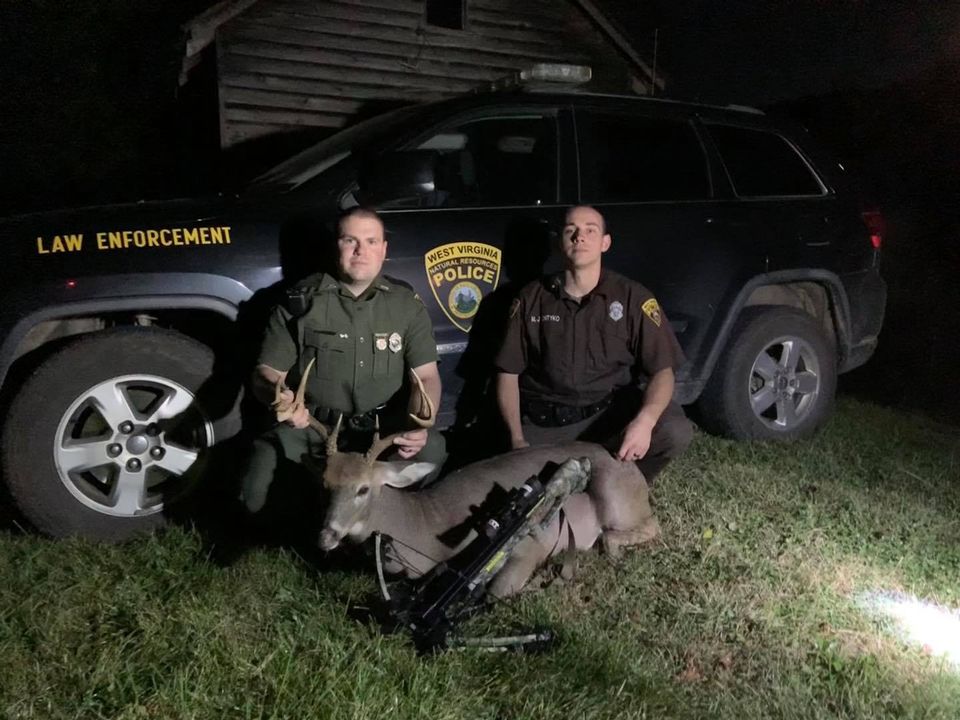 FRANKLIN, W.Va. — West Virginia Natural Resources Police Officer Matt Kontyko routinely patrols Pendleton County looking for information to help disrupt outlaws. He didn’t realize in September, the assistance on his most recent poaching case would be provided by his in-laws.

“Got a little bit luck and got some help from my wife. The guy apparently didn’t realize I was new to the county, but he parked on my wife’s family’s land,” Kontyko noted in a recent appearance on West Virginia Outdoors.

The vehicle had Virginia license plates. Officer Kontyko ran the tags and learned the owner had formerly lied in the area and over his life had gained a reputation for hunting where he wasn’t necessarily welcome.

“Turns out he posted a picture on Facebook of a deer he killed and I even recognized where the deer was laying when he took the picture. He was on my radar from that point forward.” Kontyko said.

The officer was able to locate the deer, a doe, and assembled ample evidence to prove the deer was taken on land where the hunter, now identified as Michael Bitzer, 48, of Virginia, did not have permission to hunt.

A few days later, Kontyko spotted Bitzer’s truck again in a different location and enlisted the help of State Trooper Trenton to aid in approaching the individual.

“I figured he’d be less spooked if he was approached by the State Police instead of the Natural Resources Police,” he explained.

Kontyko and the trooper were able to approach Bitzer and his daughter about to cross a fence on property where they were not supposed to be. During the conversation, Kontyko said Bitzer confessed to killing an eight point buck.

He was cited for two counts each of hunting from motor vehicle, illegal possession of game, and hunting without permission. He enter a guilty plea in Pendleton County Magistrate Court October 6th. Bitzer was ordered to pay $7,141.50 in fines, court costs, and replacement fees. His hunting license was also revoked for five years.

The substantial fine came because of the buck’s size. According to Officer Kontyko the buck had a 16.5 inch spread, which under a new set of trophy penalties established by the Legislature required a fine of $5,000. The new trophy fees went into effect for the first time this year.

Under the legislation any buck illegally killed in which the antler spread is 14-16 inches the fine is $2,500. A 16 to 18 inch spread mandates a $5,000 fine. Illegally killed bucks with a spread of 18 to 20 inches results in a $7,500 fine. A buck with more than a 20 inch spread on its rack commands a $10,000 fine. The changes which were enacted during the 2020 Regular Session of the Legislature took effect this year. The new rules also mandate the five year revocation of a convicted poachers hunting and fishing license.

Kontyko, since the incident on his family’s property in Pendleton County has cited another individual for killing a big buck.

“That was the following Sunday and we had information not too far away another buck was shot with a rifle. It was a little big different situation. It was a younger guy and his girlfriend,” he said.

The suspect in the case was cited and has confessed. The deer was confiscated in time for the meat to be donated. The individual involved will face an even steeper fine since the buck’s spread was more than 18 inches.

Republicans Close In On Democrats in WV Party Registration
Teachers Union Challenges Back-to-School Order
So, When is it a Good Time for Impeachment?