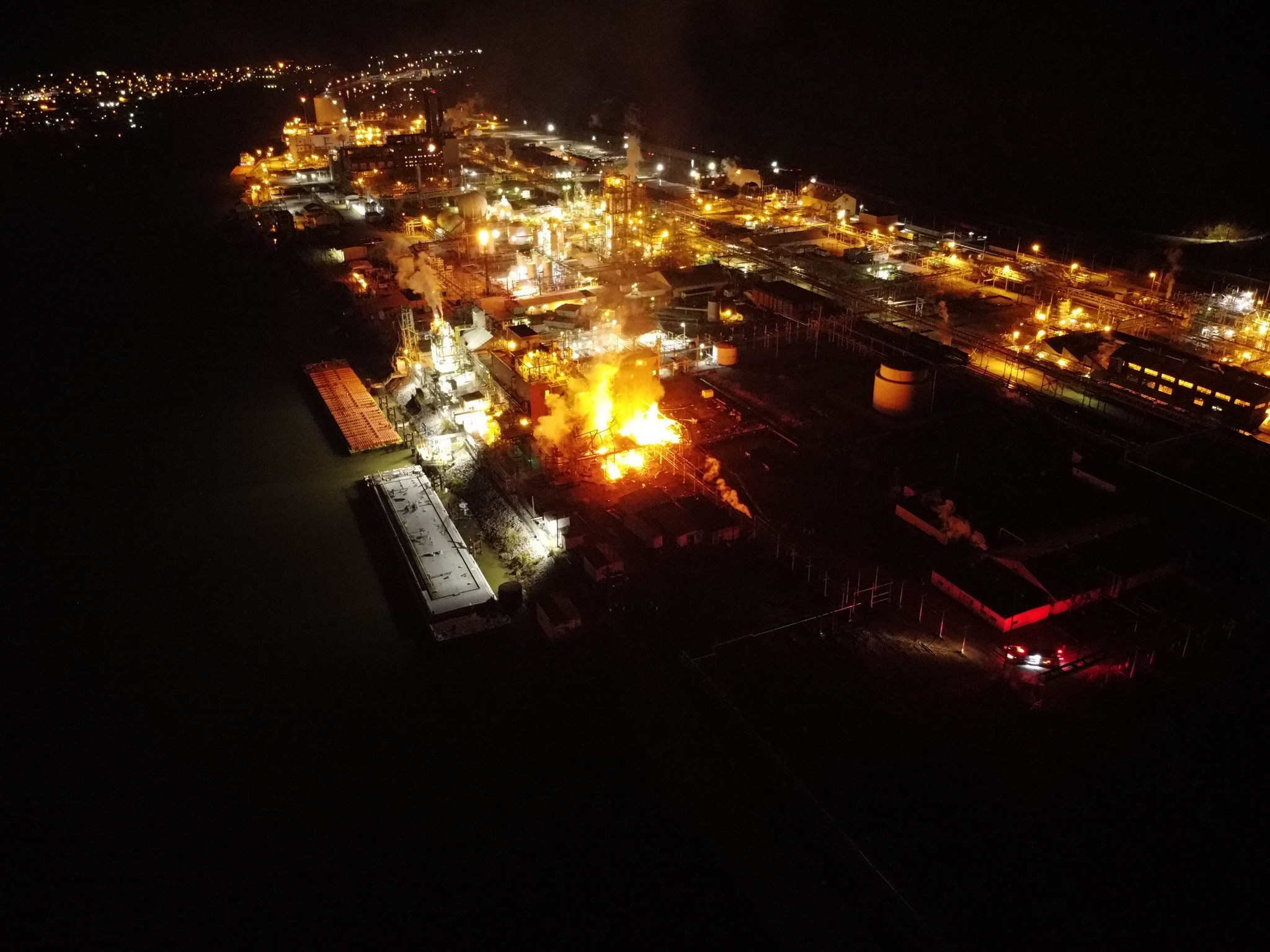 BELLE, W.Va. — The shelter-in-place Kanawha County officials ordered after a Tuesday night explosion and chemical incident in Belle was lifted around 2:30 a.m. Wednesday.

A fire was extinguished about two hours after the blast was first reported, with local emergency responders reporting that the scene had been stabilized.

Four injuries were reported, and area schools were closing Wednesday as a precaution.

As fire lit up the night sky, the Kanawha County Sheriff’s Department and State Police were controlling traffic at the roads around the plant. U.S. 60 was shut down from Campbells Creek to the Chelyan Bridge.

The explosion happened about 10 p.m. at an area along the Kanawha River about 10 miles east of Charleston.

“All we can tell you is if you live in that area shelter in place,” Kanawha County Commissioner Kent Carper told MetroNews a few minutes after the explosion was first reported.

Carper said the explosion and fire likely involved chlorinated dry bleach and methanol and started with a barge, possibly offloading.

“The fire was significant,” Carper said. “The explosion was massive. It shook people’s houses on both sides of the river.”

He added, “It shook homes and businesses clear over on the Marmet side of the river.”

The Belle Chemical Company that oversees the chemical operations at the site said in a 1:30 a.m. news release the explosion occurred at the site but was not related to chemical company operations.

Four people had confirmed injuries from the incident, Carper said about midnight. One was a driver who was injured by debris from the explosion that struck their vehicle.

Shelter in place up within two miles of Belle.

Please be careful everyone! pic.twitter.com/TtXX20bu6q

Chlorine itself is not flammable, but it can react explosively or form explosive compounds with other chemicals such as turpentine and ammonia, according to the Centers for Disease Control and Prevention.

Kanawha County’s Emergency Operations Center was activated, and Kanawha County emergency and homeland security responders were at the scene. The Belle Volunteer Fire Department was also at the scene “along with every volunteer fire department in the area.”

“We’ve contacted the state and the Governor’s Office for assistance,” Carper said.

Governor Justice stated a little after 11 p.m. that he has been monitoring the situation.

“I urge everyone in the area to follow the shelter-in-place order currently in effect,” he said. “Cathy and I are praying for the safety of all involved.”

The Kanawha County school board announced that all Riverside area feeder schools will be closed Wednesday because of the explosion.

⚠ Chemical incident at Chemours plant in Belle. Shelter in place ordered for 2 mile radius of the plant

The location was a DuPont facility for many years in an area commonly referred to as the Chemical Valley not far from West Virginia’s capital. Chemours was founded in July 2015 as a spin-off from DuPont. There are about 200 employees at the Belle location.

The 723-acre former DuPont site is situated along the Kanawha River and has manufactured various specialty and agricultural products since 1926.

Other tenants at the Belle site also include Kureha, Optima Chemical Group, and Sentinel Transportation.