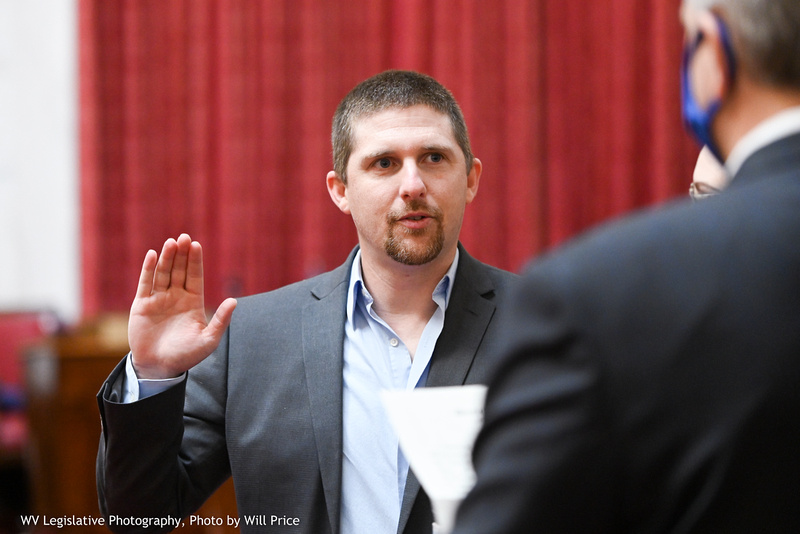 Derrick Evans was sworn in as a new member of the West Virginia House of Delegates. (Will Price/West Virginia Legislative Photography)

A newly-elected member of West Virginia’s House of Delegates was among the mob who stormed the U.S. Capitol today.

Derrick Evans, R-Wayne, livestreamed and then deleted videos from inside the Capitol, but others took screenshots and videos of the original videos.

In one, he is shoots cell phone video out into the Capitol interior while surging through a door. He says, “We’re in! We’re in! Derrick Evans is in the Capitol!”

A cell phone recording of a portion of now-deleted video. “We’re in! We’re in! Derrick Evans is in the Capitol!” https://t.co/IKQzeLoVFf pic.twitter.com/pacZiVN0Cp

In a Facebook post, Evans said he was on a bus traveling home to West Virginia this evening and described himself as “an independent member of the media to film history.”

Evans placed first in a two-member district in the most recent General Election, with 8,227 votes. He is a first-time officeholder.

House Speaker Roger Hanshaw, R-Clay, today said, “What occurred today is unpatriotic, un-American and I condemn it in the strongest terms possible.”

“Like most Americans, I am shocked, saddened, angered and disturbed by the images coming out of our nation’s Capitol today,” Hanshaw said. “The peaceful transfer of power is a bedrock principle of our republic, and is what has held the United States up as that shining city on a hill for nearly 250 years.

“I have not spoken to Delegate Evans about today’s events, I don’t know the specifics of his involvement, I have only seen what has been posted on social media so far, and I’m sure more details may come out soon. He will need to answer to his constituents and colleagues regarding his involvement in what has occurred today.”

“While free speech and peaceful protests are a core value of American society, storming government buildings and participating in a violent intentional disruption of one of our nation’s most fundamental political institutions is a crime that should be prosecuted to the fullest extent of the law.”

“This is unacceptable behavior and conduct unbecoming of an elected official,” Skaff said. “I am calling on Speaker Hanshaw to suspend Delegate Derrick Evans’ rights, privileges and access to West Virginia State Capitol Building, immediately and indefinitely, to allow for investigation into this incident.”

The governor’s powers in state code include the ability to jail those who engage in “hostile action” against the United States.

“He may also cause to be apprehended and imprisoned all who in time of war, insurrection or public danger shall willfully give aid, support or information to the enemy or insurgents, or who, he shall have just cause to believe, are conspiring or combining together to aid or support any hostile action against the United States or this state.”

The riots today inside the U.S. Capitol disrupted certification of Electoral College votes by the houses of Congress. Vice President Mike Pence, who was presiding in the Senate, was among those evacuated. Senators and representatives were rushed to safety.

What is normally a perfunctory exercise sparked heated debate this year after President Trump pushed unproven theories of election fraud.

The president addressed the crowd this morning and tweeted that Wednesday’s protests would be “wild.”

Evans, who already had a reputation for controversial statements, posted photos of a busload of protesters heading to the Capitol yesterday evening. And he kept up earlier videos of crowds outside the Capitol.

He deleted videos from inside the Capitol, but others made copies.

As the video ends, Evans shouts “Our house!” and then “I don’t know where we’re going, but I’m following the crowd.”