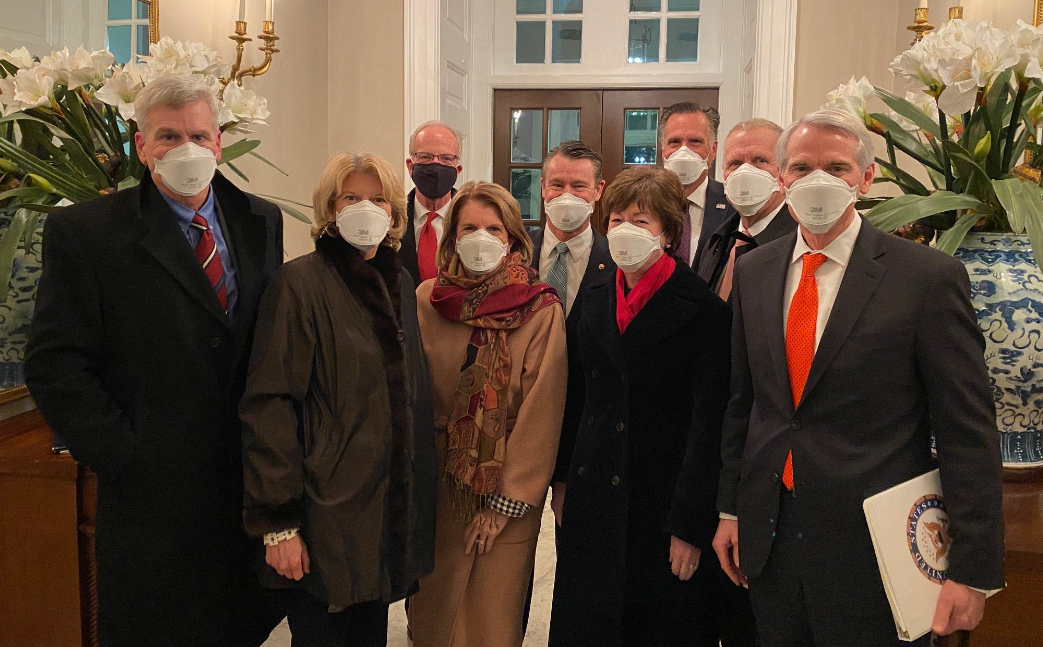 The Republican senators — which included West Virginia’s Shelley Moore Capito — requested the meeting to discuss their $618 billion framework and its similarities with Biden’s proposal.

“I wouldn’t say that we came together on a package tonight. No one expected that in a two-hour meeting,” Sen. Susan Collins, R-Maine, said. “What we did agree to do is to follow up and talk further at the staff level and amongst ourselves and with the president and vice president on how we can continue to work together on this very important issue.”

The senators on Sunday announced their plan, which matches Biden’s offer on funding coronavirus vaccine development and distribution, testing and contact tracing, and manufacturing personal protective equipment, as well as support for behavioral health and substance misuse services.

The Republican proposal would provide some Americans with $1,000 relief checks; payments for individuals would start being phased out at $40,000 with a $50,000 cap, and joint filers would be phased out starting at $80,000 and capped at $100,000. Dependent adults and children would receive $500.

The Republicans also want to extend the $300 enhanced unemployment payment through June, while Biden’s proposal increases the amount to $400 through September.

The Republican plan also does not include a gradual increase of the minimum wage to $15.

According to Capito’s office, the senator pushed for additional funding for rural hospitals as well as resources for treating opioid addiction.

Eight of the Republican senators, including Capito, are part of a bipartisan group of lawmakers that attracted attention for drafting the December coronavirus relief measure. Capito joined the “908 coalition” when Congress began its new session last month.

“I am hopeful that we can once again pass a sixth bipartisan COVID relief package,” Collins said.

Productive meeting tonight w/ @potus to discuss the COVID-19 relief proposal we unveiled today. This is a step in the right direction. We must continue to do what we’ve done before & work together—both sides—to deliver relief to the American people now. https://t.co/ZZLK4JIxg8 pic.twitter.com/LQRQfKHsp4

“He reiterated that while he is hopeful that the Rescue Plan can pass with bipartisan support, a reconciliation package is a path to achieve that end,” she said following the meeting.

Psaki added: “The President expressed his hope that the group could continue to discuss ways to strengthen the American Rescue Plan as it moves forward, and find areas of common ground — including work on small business support and nutrition programs. He reiterated, however, that he will not slow down work on this urgent crisis response, and will not settle for a package that fails to meet the moment.”

“In particular, a three-month extension of jobless benefits is a non-starter. Many states still have not gotten benefits out the door after Donald Trump’s tantrum in December caused them to lapse, and we’re facing another cliff in just six weeks,” he said.

“We can’t keep jumping from cliff to cliff every few months. Workers who have lost their jobs through no fault of their own shouldn’t be constantly worrying that they are going to lose their income overnight. An extension of benefits for at least six months is essential.”

Senate Majority Leader Chuck Schumer, D-N.Y., and House Speaker Nancy Pelosi, D-Calif., filed Monday a joint budget resolution to give the Senate a necessary path for passing a plan with a simple majority rather than 60 votes. The Senate is split 50-50 between the Democratic and Republican caucuses.

“With this budget resolution, the Democratic Congress is paving the way for the landmark Biden-Harris coronavirus package that will crush the virus and deliver real relief to families and communities in need,” the congressional leaders said. “We are hopeful that Republicans will work in a bipartisan manner to support assistance for their communities, but the American people cannot afford any more delays and the Congress must act to prevent more needless suffering.”

“From my standpoint, I truly think that our nation right now needs to step up in a bigger way and move forward,” he said. “I hate it if I’m in opposition to maybe how Shelley is thinking about this, but that is exactly how I believe.”

Monday’s meeting also followed headlines over the weekend involving Sen. Joe Manchin, D-W.Va.; Manchin had expressed his disappointment about the vice president’s interview with WSAZ-TV, noting he did not know about the interview beforehand, and the administration and legislators should focus more on cooperation.

Psaki said during the White House’s Monday briefing officials are talking to Manchin.

“He’s an important partner as we look to move forward on this package and, of course, all of the president’s agenda,” she said.