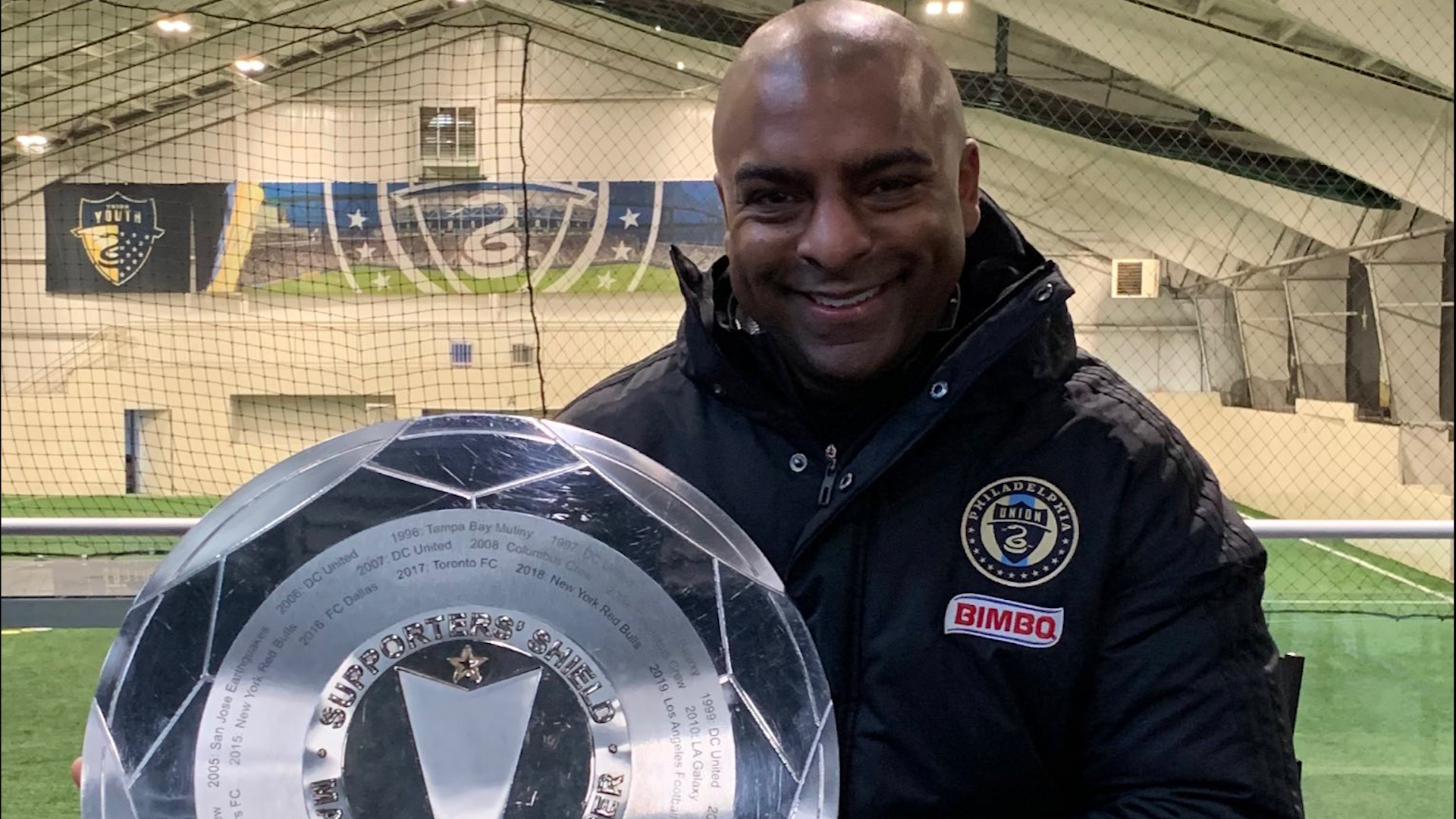 MORGANTOWN, W.Va. — Many coaches that step down from a job cite the need to spend more time with their family. Former WVU men’s soccer head coach Marlon LeBlanc is making up for a lot of lost time with his family in his new role as the leader of the Philadelphia Union II squad, the reserve team for the Major League Soccer franchise.

During his 14th and final season as the head coach of the Mountaineers in 2019, LeBlanc’s wife, daughter and son lived in Philadelphia.

“I had lived apart from my family for the better part of six months by the time I was back with them in January,” LeBlanc said.

While Marlon was leading the Mountaineers to a Mid-American Conference Tournament title and a second round appearance in the NCAA’s, his 12-year-old son Kellan was enrolled in the Philadelphia Union Academy, which is a junior soccer developmental program affiliated with the MLS team.

“He is the whole reason why we are here,” LeBlanc said. “He wanted to be a part of this environment and they wanted him here. This is a professional organization and the job of the academy is to produce players for the first team. He gets to play up a year with the under-14’s as a 12-year-old. He had a great first half of the year (in 2020) and actually led the 14’s in scoring. So he is enjoying his football here.

“He is out here to compete and get better. But it is kind of neat watching him chase his goals at the age of twelve. He is a young, mature kid. They have him in the school here as well. They operate their own school from seventh grade to high school and he has been doing quite well.”

LeBlanc resigned from WVU after the 2019 season and moved to the Philadelphia area. In January, Marlon traveled to Sao Paulo, Brazil with Kellan to compete in the Ibercup Under-12 youth tournament. Just over a month later, the COVID pandemic began to shut down soccer programs all across America.

“The spring for the academy had just kicked off and I think we got one or two games in. And then the shutdown happened literally my first day on the field with the academy. During that time period, I got to know the team, no different than what any other coach was doing, on Zoom meetings and talking and getting to know people that way.”

Back on the pitch in August

As domestic and international soccer teams slowly reemerged from COVID pauses in the summer, LeBlanc found himself back on the pitch in a new role. When Union II head coach Sven Gartung and the franchise parted ways, LeBlanc was called up from the Under-17 team to lead Union II on August 5. In the first match, Union II defeated the New York Red Bulls II, 3-2.

“People always asked me if I wanted to get involved with the professional game and 99 out of a hundred times I would say I had no interest. My passion was always about the age bracket of development. The fact that this project here is what it is has really changed my perspective of it.

“This is a special club with a different approach. We play an exciting style and an exciting brand. The first team went out and won the Supporters Shield (most regular season points in MLS) this year. The academy has an unbelievable bevy of players that are coming through that are going to continue the positive momentum we have.”

The Union II roster is comprised of young players hopeful to make an impact at the Major League Soccer level in future years. LeBlanc is coaching college-age players in a similar system to how the parent club likes to play.

“Winning is a vital part of player development. But we don’t put the cart before the horse. Our idea is to cultivate an environment that prepares our guys for the first team, where winning matters the most. This year, we had five players out of Union II that were signed to homegrown contracts. The idea is that development takes precedence so that they are able to move forward and succeed and move to the first team.

“My job is to work very closely with our sporting director (Ernst Tanner) and with Jim Curtin (Union head coach) and the first team staff and essentially be on the same page. Up and down movement is a development opportunity for them. It is also my job when Jim says, ‘Marlon, I am going to give you two guys from the first team’, and they are easily transitioning into our group on game day. There’s a lot of coordination, collaboration. Methodologies and principals are the same.”

The 2021 MLS season is tentatively slated to begin in April. Union II will likely compete against fellow MLS reserve teams in a newly-formed league.

Two of LeBlanc’s best players at WVU have been fixtures on the Union roster. Defender Jack Elliott has competed in 98 matches over the past four seasons in Philadelphia. Defender Raymon Gaddis became the first player to start 200 matches with the Union this past season.

“It has been good to see and be around the boys and watch them play. Unfortunately, the fans haven’t been able to come in but fortunately I was able to watch those games and get to see them on a regular basis.”

Meanwhile in Morgantown, former Mountaineer Dan Stratford will open his first season as WVU’s head coach next Saturday at Coastal Carolina. Stratford played for and coached with LeBlanc for a combined five seasons. He later led the University of Charleston to a pair of Division II National Championships in 2017 and 2019.

“Dan was one of my best players. It is no surprise to me. I texted him right after he got the job and told him how happy I was for him.

“It is kind of neat to see one of my former players leading the program. It is cool that we were able to keep it in the family.”

“I got to walk away on my own terms with back-to-back championships. The goal for any coach, if you are going to leave, is to leave it better than you found it. I think over fourteen years there, I think we elevated the program to a really admirable level. Getting to walk away with a championship and feeling like you left it better than you found it was certainly satisfying and rewarding.”