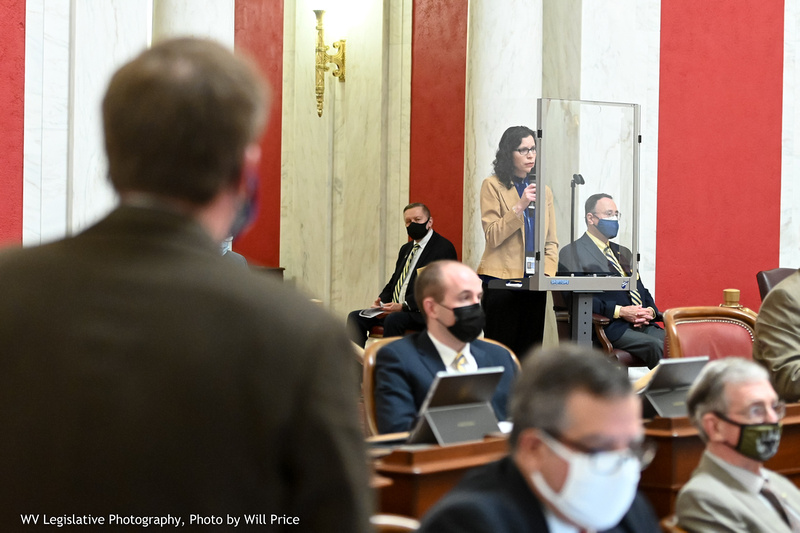 Senator Patricia Rucker describes a bill clarifying that it's unlawful for teachers to strike in West Virginia. (Will Price/West Virginia Legislative Photography)

The state Senate quickly passed a bill declaring that a work stoppage or a strike by public employees is unlawful.

“This bill simply clarifies that it was not the Legislature’s intent to facilitate illegal work stoppages. This is not a retaliatory bill. This is about making certain our kids, our most precious resource continue to be our priority.”

The House of Delegates would still need to pass the bill and the governor would need to sign it for it to be reflected in state code. A similar bill, HB 2536, which deals with what should happen to school employees’ pay during a work stoppage, has also been under consideration in the House.

Senator Mike Caputo, D-Marion, noted today marked the three-year anniversary of the start of the 2018 strike. He wondered if that was truly a coincidence.

“I don’t think any teacher in this state enjoyed walking out of those classrooms,” Caputo said.

“This bill does nothing to move West Virginia forward. It does nothing to further that profession. It’s meanspirited. I think it’s in retaliation for people standing up for what they believed in.”

Caputo, a longtime United Mine Workers representative, talked about where the teachers strikes fit into West Virginia’s labor history.

Addressing Senate President Craig Blair, he said, “Sometimes the only alternative we have Mr. President is to withhold our labor. If you look at the history of West Virginia, workers weren’t treated very well.”

The bill also specifies that provisions that normally permit making up time or alternate instruction delivery methods do not apply to work stoppages. It says superintendents may not close schools in anticipation of a strike.

The bill says county school boards should withhold pay for each day a teacher participates in a stoppage. And it specifies that if a school day is canceled because of a strike then those schools can’t have extracurricular activities.

Senator Richard Lindsay, D-Kanawha, questioned Rucker about the bill at the start of today’s Senate floor session. He concluded that the bill doesn’t do much to improve school systems. He suggested it’s retribution for the prior strikes instead.

“There’s no education value to it,” Lindsay said during a Democratic press briefing with reporters.

Senator Eric Tarr, R-Putnam, spoke up in favor of the bill. He said students experienced disruptions to their education during the strike years — and said the closures of school over the past year during the covid-19 pandemic have continued that disruption.

He said codifying the repercussions of a walkout could make some county superintendents think twice about cooperating.

“This actually requires a superintendent to take pause — and do you automatically cave to organizations that cheer our teachers on to fail our children?” Tarr said.

“It’s really a retaliatory bill because we’ve known since 1990 that it’s illegal to strike in West Virginia,” Lee said, referring to a historic strike that year.