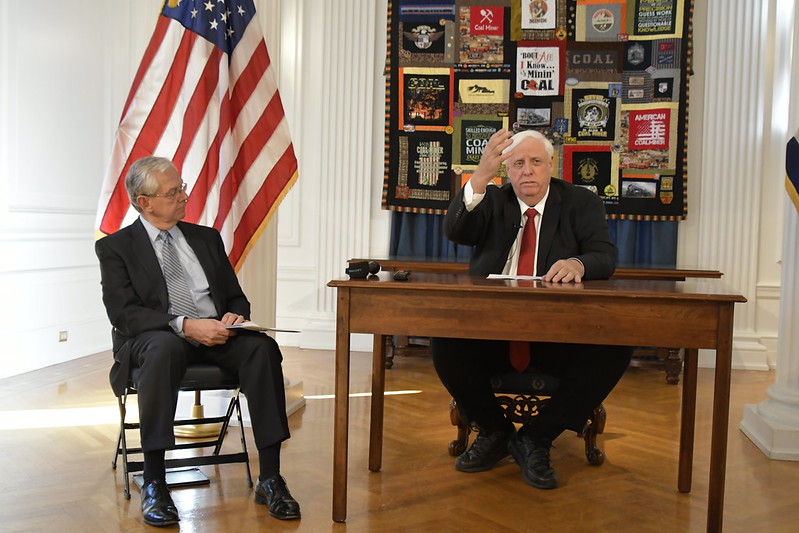 Chamber of Commerce President Steve Roberts appears with Gov. Jim Justice at a 2019 discussion of employment.

Add the West Virginia Chamber of Commerce to the chorus of concerns about the details of Gov. Jim Justice’s tax plan.

Chamber leaders say the organization generally supports the idea of an income tax cut — but has concerns about the sales tax increases that the governor has proposed to offset that.

“To rob Peter to pay Paul is not the best solution,” Chamber President Steve Roberts said today on MetroNews’ “Talkline.”

Rather than cutting the income tax by 60 percent right away — with the governor talking about elimination within three years — Roberts advocated for a more incremental approach.

The Chamber expressed its support for an income tax cut — but its reservations about the other taxes going up under the governor’s plan — in a six-page outline.

The Chamber’s concerns come on top of those expressed by the broad-based Business & Industry Council. The West Virginia Farm Bureau, which says it represents about 17,000 farming families in the state, has also expressed doubt about the details of the plan.

Justice refers to the additional taxes as pulling the rope. And he has not acted excited about a slower phase-out.

“You’re going to see an orchestrated effort by those out there that are probably thinking penny-wise and pound poor,” Justice said near the beginning of a Thursday night town hall event. “They’re good people. But they’re thinking selfishly to tell you the truth.”

The governor made another plea today that population growth will actually bring more business activity to the state.

Then he blasted the Chamber of Commerce.

The business groups have objected that the governor’s proposal would balance the income tax through the increased income tax and expanded taxes on professional services, but without providing benefit to key categories of the business community.

Income tax filers that wouldn’t get a break under the governor’s plan include:

He applauded the governor for starting the conversation about the income tax and said the organization would examine alternatives.