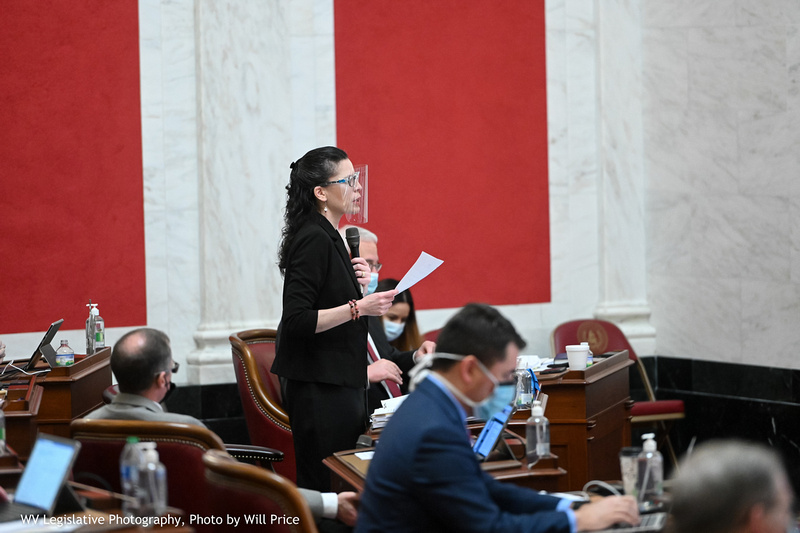 West Virginia is on the verge of becoming the latest state to pass a bill restricting how transgender athletes can participate in school sports.

The state Senate passed a bill 18-15-1 on Thursday. It now goes back to the House of Delegates, where a version with some key differences already passed. Delegates could accept changes made by delegates or insist on the original version.

Senators debated the bill for an hour and a half Thursday, Day 58 of the 60-day session.

Advocates for the bill said it would protect young female athletes from competing against stronger athletes who were born male. Others said the bill is discriminatory, mean-spirited, a likely turnoff for business investment and a possible conflict with competition under the NCAA.

Both the Republican majority leader and whip said they could not support the bill because of its possible unintended consequences.

“Is it a solution looking for a problem? Yes, I think it is,” said Majority Leader Tom Takubo, R-Kanawha.

“When the college aspect got put into this, that’s what gave me the heartburn. This could cause some major hiccups for a problem we don’t have.”

Senator Ryan Weld, R-Brooke, who has the whip’s role of assessing vote counts, made similar comments. Weld said he is working through understanding transgender issues. He noted, though, a similar debate in South Dakota that led Gov. Kristi Noem to issue a partial veto of a similar bill in that state. Noem later issued a weaker executive order.

“By including higher education in this,” Weld said, “we’ve added another layer of complexity to an issue that is already complex.”

NCAA guidelines permit transgender athletes to compete for college teams after at least a year of testosterone-suppression treatment. More than 500 student-athletes have signed a letter  to the NCAA, pushing a halt to championship events in states that restrict or aim to restrict transgender athletes.

The bill passed by the House applied to middle school and high school-aged athletes. It required county school districts to confirm the sex of students at birth prior to their participation in single-sex interscholastic sports events.

That confirmation would have taken place through submission of an original birth certificate or by a signed physician’s statement of the student’s  “unaltered internal and external reproductive anatomy.”

The Senate Education Committee changed the bill, dropping the requirement for proof of gender and instead saying “any student aggrieved by a violation” may bring an action against a county board or state institution of higher education. And the committee extended the bill to apply to sports at the college level.

That sentiment was echoed by others who argued in favor of the bill.

Senator Rollan Roberts, R-Raleigh, seemed to reject arguments that the bill discriminates against the LGBTQ community. “I think the narrative shifts around from the bill itself,” he said. “The bill is designed to protect girls in women’s sports.”

No one said such a situation has actually arisen in West Virginia.

If the bill is passed and signed by the governor, West Virginia would join dozens of states considering restrictions on transgender athletes’ participation on sports teams. Tennessee Gov. Bill Lee was the latest governor to sign such a bill into law, joining Mississippi and Arkansas.

“Some in this room don’t seem to care that this bill is cruel. That it’s mean spirited,” said Senator Bill Ihlenfeld, D-Ohio. “We’re still sending a message that this body, this senate, and also the House supports bills like this. Are we really pro-business? Are we really trying to grow this state? I’m surprised this bill is even running.”

“Transgender already face a higher risk of suicide and depression,” said Senator Ron Stollings, D-Boone, who cited statements from medical organizations.  “Whether we are concerned about the unintended consequences of this bill, the people who are specialists and the people who are on the front line clearly have an issue

“We’re creating legislation for a problem that doesn’t exist and that does have negative consequences.”

“They live in bodies that they often hate. And the isolation that causes leads half to strongly consider suicide,” Baldwin said.

“They are mocked, they are beaten, they are ridiculed, just for being different. Let’s err on the side of kindness to those who are most vulnerable.”