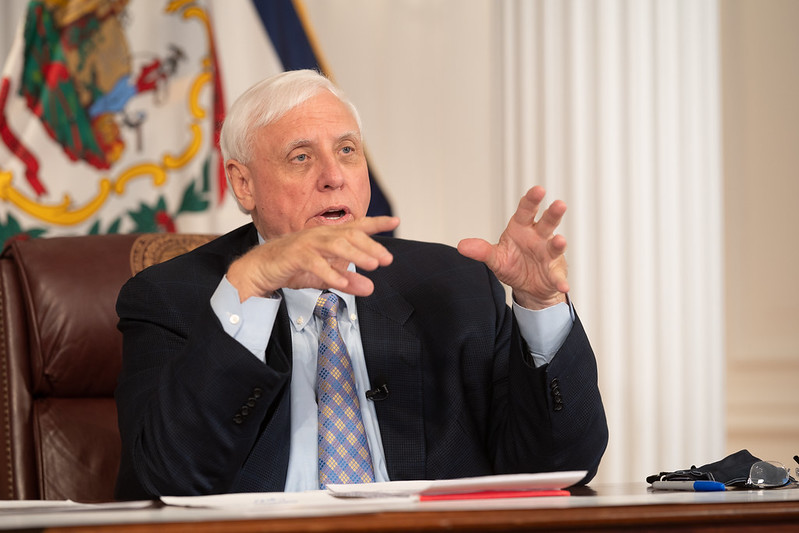 Gov. Jim Justice has promised $100 savings bonds to West Virginians under age 35 who get vaccinated, but the governor has gone farther in recent days to acknowledge the bond idea might not be possible.

Instead, the state might have to provide $100 some other way.

In a Monday recap of the governor’s most recent pandemic response briefing, the administration didn’t even use the word “bonds.”

“The Governor once again noted that, in order to curb the high number of younger West Virginians who remain unvaccinated, West Virginia is offering a $100 incentive to all residents ages 16-35 who choose to get vaccinated,” the administration wrote.

Savings bonds are purchased through U.S. Treasury and mature to full value over decades. They can be purchased only in electronic form, unlike the paper bonds from years past. Savings bonds may be bought as gifts but normally the recipient would have had to register an account with Treasury. Registering a bond requires the name of the owner and a Social Security number or an employment ID.

“You can give savings bonds for any occasion — birthdays, weddings, graduations — or for no occasion at all,” Treasury says.

That’s a big challenge as gifts for thousands of people, though.

During the most recent pandemic briefing, Justice reiterated that he would like to provide savings bonds, indicating that would symbolize a kind of national service through vaccination. But he acknowledged unanticipated complications.

“I want it to have some level of patriotic flavor to it,” Justice said.

“I want to do savings bonds. In growing up as a kid, savings bonds were given to lots of the children for birthdays or graduation or whatever it may be. Now that process is not what it was at one time. So that’s causing us an issue. Now we’ve been with the Treasury Department over and over and over, trying to figure out a way to do all this.”

The governor said different incentives are now being explored.

“If it comes right down to this, we’ll do it this way. If it comes down to a card that you swipe and the card itself is something you can keep that has a real patriotic type flavor to it that you can keep, great. If we do that, maybe we can add with it a silver dollar. But I am wanting some way to have something that our kids can keep. Along with them absolutely having the money.”

The governor said a gift card with money would have the advantage of being spent right away, circulating in a recovering economy.

“We’re trying to figure it out,” Justice said. “Just the simple act of trying to come up with 200,000-plus silver dollars is very, very difficult to do. So my people haven’t figure that out and everything.”

The governor and his health advisers have been targeting vaccination efforts at thousands of state residents under age 35, saying any success would contribute significantly to the state’s resistance to covid-19.

So far, only about 122,675 residents under age 35 have been vaccinated, according to DHHR’s coronavirus dashboard.

The largest age group currently experiencing active cases of covid-19 is 10 to 19, according to DHHR. That group accounts for 584 cases over the past seven days.

“I’m really very worried about the consequences of that because we have a population that’s not vaccinated nearly to the level of their olders.”

On the other hand, columnist Jonathan V. Last asked “Is Vaccine Bribery a Good Idea?” in The Bulwark online. “Paying people to get the vaccine is …. weird,” Last concluded in an opinion piece that used West Virginia’s savings bonds incentive as its top example.

“There’s a deep level of paternalism in offering to pay grown-ass adults to take a free, life-saving vaccine,” Last wrote. “Like most forms of paternalism, this is well-meaning. It aims to protect people from the consequences of bad choices.”

Justice has continued to make high-profile media appearances to promote the savings bond idea. On Monday, the governor was on CNBC, cable’s business news channel, and concluded that he is dedicated to the idea of the savings bonds but might not be able to make it work.

“How are you gonna get these bonds to people? What’s the distribution gonna look like?” asked Morgan Brennan, co-anchor of “Squawk on the Street.”

“We’re gonna give them the shots and we’ll have their addresses and we’ll have to mail that to them,” Justice responded. But, “It may very well be that we have to pivot and we have to go with a beautiful silver dollar and a hundred-dollar gift card. But some way, some how we are trying to tie it to some level of patriotism.”

David Faber, the other anchor of “Squawk on the Street,” transitioned the segment by commenting, “Gift cards could be coming, huh?”

West Virginia Gov. Jim Justice says now is the time to get to those who are still unsure about the vaccine. His state is offering $100 municipal bonds as an incentive. "We're trying to do something that is novel; it's a new marketing approach." @WVGovernor pic.twitter.com/r1GjwSCmSV