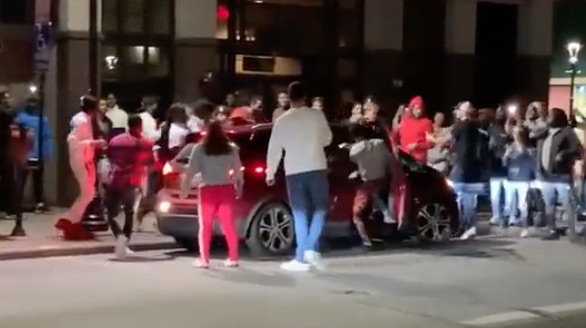 MORGANTOWN – Police in Morgantown are looking into an assault late Saturday night and into Sunday morning in downtown involving at two women and a crowd that surround a vehicle on High Street.

Video of the incident was posted on social media.

The video depicts a group of people surrounding a vehicle parked outside of The Bank Bar. In the video, a female can be seen opening the passenger side door, throwing several punches, then dragging a woman out of the car by her hair. The assault continues in the street as the victim lies on the ground taking several more punches. Eventually, the victim is able to make it to the car and the driver is able to pull away as the crowd appears to pummel the sides of the vehicle.

We’re investigating three separate incidents that happened on High Street at approximately 3 a.m. on May 9. Anyone with information should contact the Morgantown PD’s TIPS Line to make an anonymous tip at 304-284-7520.

Morgantown Police are aware of the video and detectives are in the process of identifying potential suspects and witnesses. Preliminary reports inidcate that a disagreement started inside the night club and continued into the streets.

Anyone with information is asked to call the Morgantown Police Department at 304-284-7522.