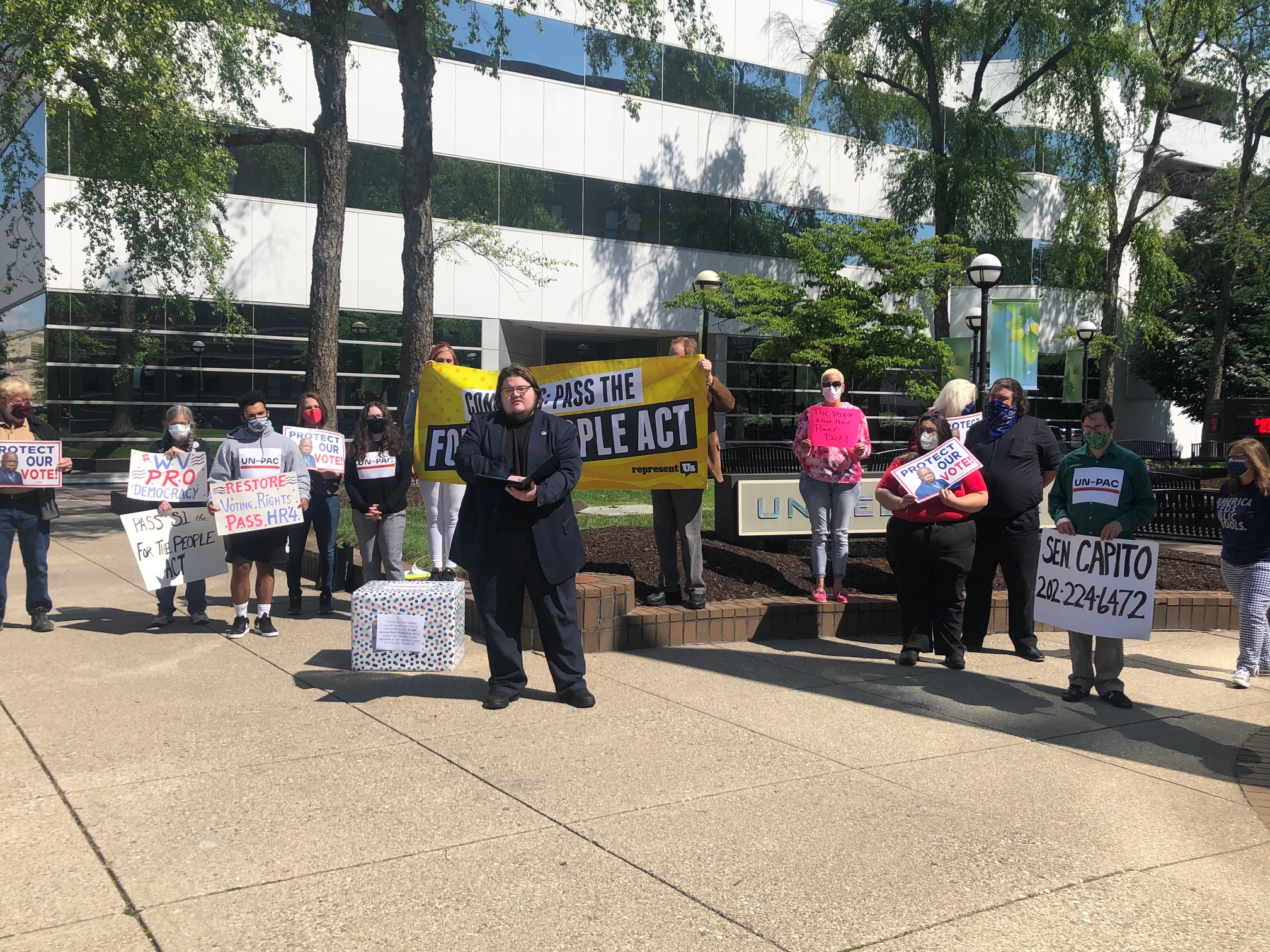 David Crawley, WV State Director of UnPAC speaks during the event on Tuesday.

CHARLESTON, W.Va. — As the Senate Rules Committee is considering amendments on Tuesday to S.1, the For the People Act, a group of young West Virginians gathered outside of U.S. Senator Shelley Moore Capito’s Charleston Office to urge passage.

West Virginia representatives from RepresentUs and Un-PAC along with Tega Toney, the Vice President of West Virginia AFT spoke in favor of the controversial legislation. Capito is on the Senate Rules Committee involved in “markup” day on Tuesday, which is led by Committee Chair Amy Klobuchar (D-MN).

The 700 page measure would require states to have same-day voter registration, automatic voter registration and voter-verified paper ballots. States would also have to provide voters with at least 15 consecutive days of early voting in federal elections.

The legislation also would change the influence of money in elections by requiring political organizations to disclose their donors. The Federal Election Commission’s enforcement powers would also be restructured.

David Crawley, the West Virginia State Director of Un-PAC told MetroNews on Tuesday that the country is “sick” and this act could be a cure.

“We are more divided today than we have been since the Civil War. It’s not just a partisan divide, it’s a class divide, a cultural divide. people don’t have faith in the American system of government,” Crawley said.

“If people know that this dark money isn’t influencing politicians, if they know there is fairness in who gets to vote and who redistricts the districts, it will help fix that divide. it’s going to be the cure that we need.”

At a federal level, the act would also establish an independent commission to draw voting district lines. West Virginia will be in the spotlight with a redraw of congressional districts due to losing a congressional seat following Census results

Crawley said if independent commissions get it done federally, it shows it could be done in the state legislature too.

“Federally the For the People Act will battle partisans redistricting. We will have non-partisan redistricting commissions that will fight the partisan bickering,” he said.

Erin Lehman, the state organizer for RepresentUs release poll data from the organization at the rally on the corner of Virginia and Laidley Streets in downtown.

According to the organization, 71% of West Virginia voters say they would like their senators to vote yes on the act. The phone poll of 402 voters was conducted April 15 to 17. Business and labor group leaders held a similar event to support passage in late April.

At the event, Un-PAC, delivered pledge signatures and resolutions representing over 29,000 young West Virginians who support the bill to Capito.

Capito tweeted out a video of her in the committee meetings on Tuesday against the measure:

After record turnout in West Virginia and across our country in 2020, states don’t need Washington, D.C. to strip them of their authority and impose burdensome requirements to fix problems that do not exist. pic.twitter.com/Ohbr81DJvh

Capito also appeared on FOX News on Tuesday and said S.1 would make it harder for West Virginians to vote.

“It just shows you it’s a one-size-fits-all federal power grab. They politicize the FEC. They cannot possibly tell me they think that’s a good idea if the Republicans were in charge. I think it’s very transparent what’s going on here.”

Secretary of State Mac Warner testified to the Senate Rules Committee in March against the measure. CBS reported that during a markup, members of the committee may propose changes or amendments to the bill, followed by a final vote on whether to advance the bill to the Senate floor.

The House of Representatives passed its version of the proposal in March with West Virginia Reps. David McKinley, Alex Mooney and Carol Miller opposition the bill. Sen. Joe Manchin, D-W.Va., is the only Democratic senator not sponsoring the legislation in the Senate.