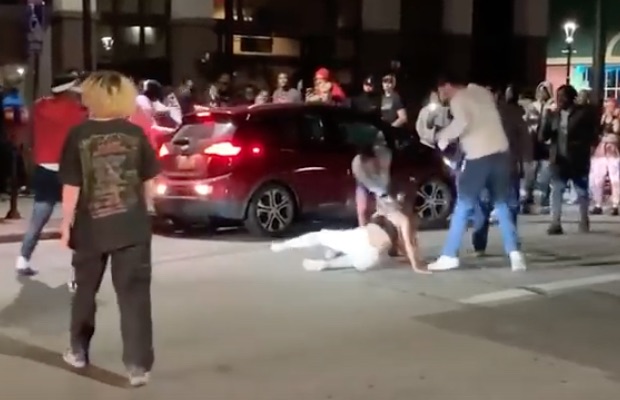 MORGANTOWN – Maybe it is a sign to move on to other options. Morgantown Uber driver Vincent Kang was out for what he thought was going to be another uneventful pickup in downtown Morgantown when he found himself in the middle of a melee.

When Kang arrived for the pickup in front of the Bank Bar early Sunday morning a fight was already underway and soon an angry mob was coming after Kang and his vehicle.

He had a hunch as soon as he arrived that tempers were flaring but did not immediately feel there was any threat to his safety.

“I see a man getting tossed to the ground in the turning lane in front of The Sports Page. I’ve never quite seen a fight like that on High Street,” Kang recalled on WAJR’s Talk of the Town. “I just thought ‘oh, that’s interesting. That’s something to take note of.’ I was actually thinking of my own safety at the time, which I should’ve but normally I don’t have to.”

Kang soon realized he was about to be involved in the fracas whether he wanted to be or not as two women helped the man who had just been thrown into the street toward Kang’s waiting vehicle. He was their Uber ride.

“I saw the girls carrying him to the car and they were trying to save him it looked like,” Kang continued.

As the two women and man started to get in Kang’s car, the crowd then surround the vehicle, beating on the car and attempting to get the doors open and attack Kang and his passengers. One individual was successful in getting the driver’s door open and began punching Kang in the face and chest, landing punches on his jaw and cheek. Kang was able to fight off the attacker while he believes someone else pulled the individual away.

Meanwhile, video taken by bystanders showed attackers opening the passenger side door and dragging a woman by her hair from the car and throwing several punches while the victim lies on the ground.

Eventually, Kang and the other victims were able to make it to the car and he was able to pull away. Kang claimed about $1,500 worth of damage was done to his car and the whole event has left him shaken.

“The adrenaline was really pumping. I was up for 30 hours straight. I didn’t sleep the entire night and have really slept well since then,” said Kang.

Kang admitted if he finds himself in a similar situation in the future, arriving for a pickup as a fight is breaking out, that next time he might just keep driving.

We’re investigating three separate incidents that happened on High Street at approximately 3 a.m. on May 9. Anyone with information should contact the Morgantown PD’s TIPS Line to make an anonymous tip at 304-284-7520.

Morgantown Police are aware of the video and detectives are in the process of identifying potential suspects and witnesses. Preliminary reports inidcate that a disagreement started inside the night club and continued into the streets.

Anyone with information is asked to call the Morgantown Police Department at 304-284-7522.