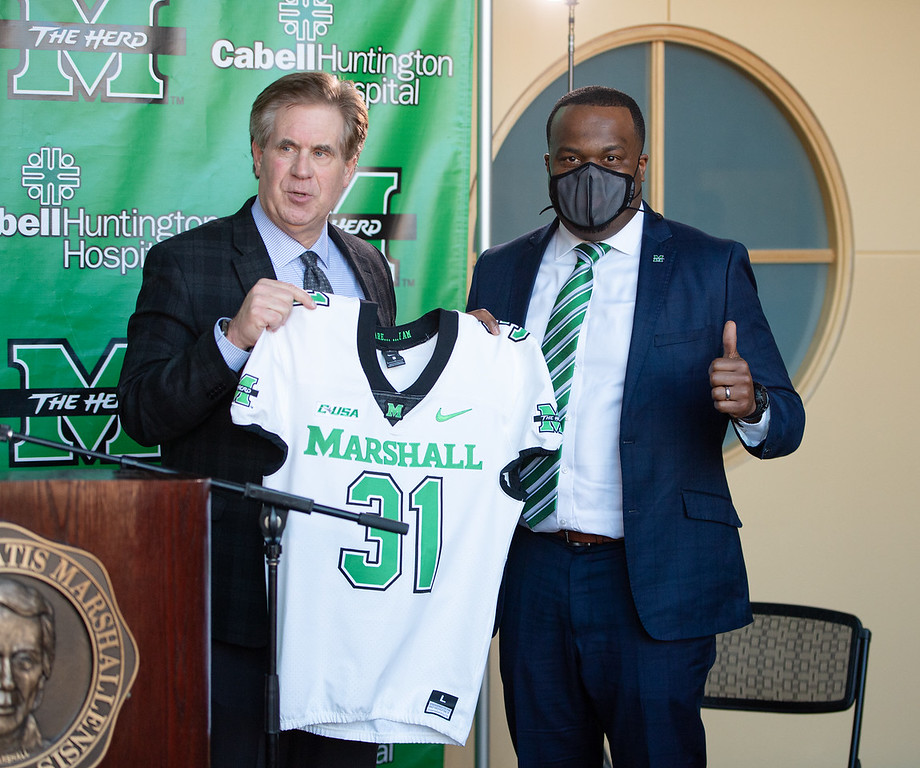 Marshall University’s athletic department will be under new leadership starting next month.

On Friday, MU President Jerome A. Gilbert announced athletic director Mike Hamrick will step down June 30 and assume a new role with the university.

Beginning July 1, Jeff O’Malley will begin serving as interim athletic director, changing roles from his current position as associate director of athletics and chief of staff.

In April, Gilbert announced he would not seek an extension to his contract and that he planned to step down in July 2022. Appointing O’Malley interim athletic director allows for Gilbert’s replacement as President to participate in the search for a new athletic director.

Hamrick, meanwhile, will start as a special assistant to the president for one year starting July 1. That will allow Hamrick to focus on fundraising and facilities planning for Marshall’s previously announced baseball stadium project.

“Mike Hamrick has done an excellent job as athletic director and I am disappointed he is no longer able to serve in that capacity,” Gilbert said. “In his role as special assistant to the president, I will be working with him and others to raise money, and to plan for facilities and other improvements for the university.”

Hamrick has been Marshall’s athletic director since 2009 and has the school’s second-longest tenure at that position behind only Cam Henderson. He recently wrapped up his 31st year as a Division I athletic director. Hamrick was previously the athletic director at UNLV, East Carolina and Arkansas Little-Rock, as well as assistant AD at Illinois State and Kansas.

Under Hamrick’s watch, Marshall’s athletic programs have broken new barriers, including a national championship in men’s soccer this season. The Thundering Herd has the winningest football program in Conference USA over the last decade and the football, men’s basketball, women’s basketball and softball programs each won postseason games in their 2018-2019 seasons.

Hamrick was also a big part of Marshall’s Vision Campaign, considered the most important fundraising effort in the history of the school’s athletics. More than $33 million was raised in private dollars to enhance Herd facilities, including the Veterans Memorial Soccer Complex and the Chris Cline Indoor Athletic Facility.

More than $50 million in facility improvements have been completed during Hamrick’s tenure, including $3.1 million in significant upgrades to the Cam Henderson Center.

O’Malley has held his current position for the last 19 years, overseeing men’s basketball, men’s soccer, men’s golf and baseball, along with the departments academics and compliance offices.

“Jeff O’Malley is an outstanding athletic administrator and someone who is highly capable of directing our athletic department in an interim basis over the next year or more,” Gilbert said. “I look forward to working with him to continue the process of planning for a baseball stadium and other additions and improvements in athletics. When the next president starts a search for a permanent athletic director, I have indicated to Jeff that he will be allowed to apply if he is interested.”

Patrick Farrell, chairman of the unversity’s board of governors, issued the following statement to his social media: “Mike Hamrick has faithfully served Marshall University for many years. He made meaningful contributions to the university by hiring great coaches, raising a lot of money and building fantastic facilities. He is a true Son of Marshall and always will be. Despite all the good Mike has done as Athletics Director, there was not enough support from the Board of Governors to approve a new contract extension. We are, however, pleased that Mike is going to remain at the university to help with fundraising for our new baseball stadium.”

The statement continued and concluded with O’Malley saying, “As we look to the future, the landscape of college sports is rapidly changing. This creates new challenges and presents tremendous opportunities. There is an excitement in the air right now surrounding Marshall Athletics and we plan to capitalize on that momentum by building on our many successes.”