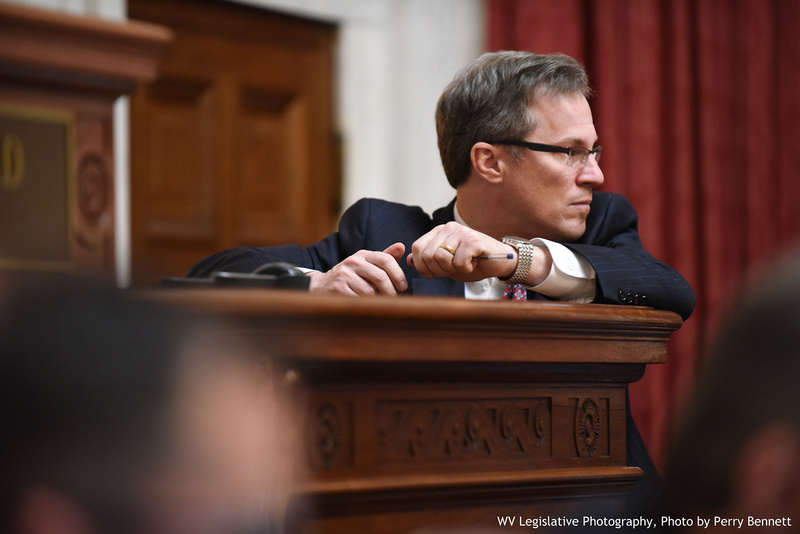 Dan Greer looks out onto the floor of the House of Delegates. (Perry Bennett/West Virginia Legislative Photography)

The chief counsel to the House Speaker has been honored with a legislative staff achievement award by a national organization.

Dan Greear, longtime attorney with the House of Delegates majority, was presented the award by the National Conference of State Legislatures’ Leadership Staff Professional Association.

“Dan Greear is the very model of a legislative staff professional,” said House Speaker Roger Hanshaw, R-Clay. “In addition to being an indispensable legal resource for the West Virginia House of Delegates, he is a trusted and reliable counselor to the entire leadership staff of the House.

“I am proud to call him a friend and am delighted he is being recognized for his exemplary service.”

Greear is a former member of the House of Delegates and has run for circuit judge and attorney general.

He earned his bachelor’s degree from Liberty University and his law degree from West Virginia University. His colleagues at the Legislature noted that Greear has contributed to nearly every major piece of legislation considered by the House of Delegates since his arrival in a professional role.

The 2021 Legislative Staff Achievement Award is designed to recognize those who demonstrate excellence in supporting the work of a state legislature, strengthening the legislative institution, and contributing to the success of NCSL and its programs.

Each of NCSL’s nine professional staff associations, along with the Legislative Education Staff Network and the staff co-chairs of the overall standing committees, may select up to two people, teams or legislative offices from its membership to receive the annual award.

The Leadership Staff Professional Association, whose members are caucus and personal staff as well as staff to legislative leaders, offers professional development and networking opportunities with peers from across the country.